We cooked and ate a nice breakfast and decided to wander around the area a bit. There was an arts and crafts show going on around the courthouse square, and we stopped in to look around. The weather was perfect—crystal clear blue sky and temperature in the seventies. Being outside on such a day was more of a treat than the show. 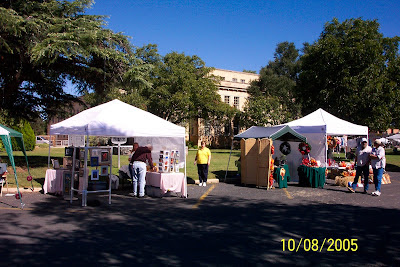 Some of the artsy-crafty things were interesting, but my investment in a small jar of Rainier cherry preserves made by a vendor from Hunt, Texas, was nothing short of spectacular. I'm not sure I've ever had better preserves of any kind. The jar is almost empty as of this writing, and I'm rationing myself as I try to locate the vendor. I'm starting to panic, because there is nothing on the internet. It would just be unseemly to hire a private detective, but I'll swear it would be worth it. Update: I finally found the source of the preserves—a pleasant woman named Karen who lives on a ranch near Hunt and makes all her jellies, jams and preserves from fruit grown organically on her land. She explained that the Rainier cherry preserves were a specialty, in that she had bought them on a recent trip to Washington and that they were only available for a brief time each fall. I had never heard of them before, but I was now a devotee, even at six bucks for a small jar. She said that she only had two jars left! I ordered them at once, along with some other flavors that she described over the phone. She even had preserves she had made from cactus and flowers. I didn't think I was ready for a whole jar of those. I bragged and bragged on her handiwork, and she seemed thrilled that someone appreciated the obvious pride she took in her skill. I offered a credit card to make the sale, but she said she would just put a bill inside the box when she mailed the preserves. I marveled at the trust she placed in me merely by the sound of my voice on the phone—only in Texas, I thought. I also thought about the neat experience of this little diversion—finding such a delightful little treat by pure happenstance. It was not so much the preserves, although they are unimaginably good, but the uniqueness of this little vignette—the woman from a tiny Texas hill country burg who takes so much pride in her product, plus the quaintness of the trust she still had in mankind, unspoiled by the rapaciousness and deceit that is so much a part of a big city. I savored this experience greatly, knowing that Sandy and I will be one of the very few people who will sample her wares and feel her warmth as our lives briefly touch. This is what traveling is all about—not only enjoying the awesomeness of the world God created for us, but finding little lagniappes like this that will always be etched into our memories.

We had lunch at El Acapulco, a busy Mexican restaurant not far from downtown. The food was quite passable, although not particularly memorable. The entrée was large—plenty for the both of us.

We drove around in the country west of Kerrville, enjoying the rolling hills and marveling at all the deer grazing by the roadside with little fear of us. At one point, we came upon some unusual looking cattle. There were two longhorns, with which we were familiar, but there were several others with really striking black coats in the front and rear and a beige band in the middle. Sandy exclaimed that they were clearly designer cows—probably Liz Claiborne. We took some photos for evidence, but I'm a little dubious about the Liz Claiborne thing. 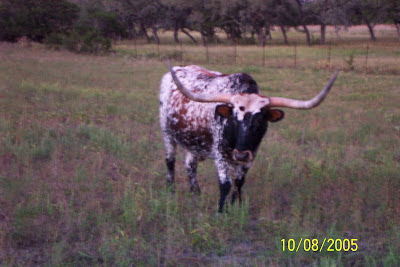 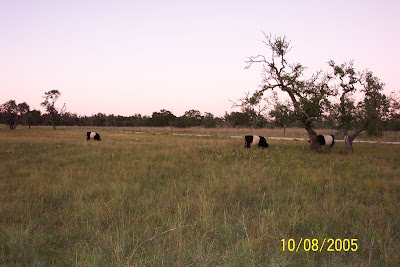 We stopped at a Gibson's discount store—one of the few remaining after Wal-Mart's conquest of retailing to the masses. I suppose it survived because it has morphed into something else—a store that deals mostly in fishing and hunting gear, with a significant amount of hard-to-find housewares, gadgets and hardware. It was a very interesting place, and we bought a small electric heater for Homer. (A norther had come through a day or two ago, and we nearly froze during the previous night. Sandy was scared to turn on the central heat in Homer because it uses propane, which I suppose she thought was either too volatile or too noxious for human use. Never mind that it has been around a hundred years or so; I'm sure its approval by the government is right around the corner.) I was finally able to demonstrate that it worked fine without asphyxiating us, but her skepticism was not easily overcome. I bought the electric heater anyway, because it didn't make much sense to use Homer's propane when I could use the RV Park's electricity for free—well, that is, for the price already paid in the space rental fee.

We had dinner at La Four's Seafood Restaurant in Kerrville, a family-run place that was really pretty good, considering how far away from any sea it is. One of the remarkable things about it was the energy of the waiter—a young man who was the son of the owner. He literally ran everywhere he went. The service was, as you might imagine, spectacular. We had refills on everything almost before we realized they were getting low. The poor kid just wore me out watching him—oh, to have that much energy again! Like El Acapulco, La Four's was very adequate if one is seafood-hungry, but it was not a jaw-dropper, by any means. Afterward, we got some provisions at the local HEB grocery and retreated to Homer for the night. The park's water pressure was back up, and I let out a sigh of relief. I'm sure Sandy wouldn't have slept a wink if the water main hadn't been repaired.
Posted by Mike Mills at 10:46:00 PM