After the rigors of the previous night, we slept in this morning. We decided to have a nice breakfast of bacon, eggs and toast. As is customary, Sandy and I divided up the kitchen duties—I do most of the cooking, and she does, well, everything else. About the time the eggs were frying, Sandy fired up the little electric toaster oven to make some toast. After a short time, the oven suddenly shut off, as did the small electric heater on the floor. The overhead lights had also dimmed, indicating we were now on battery power. I had forgotten that, with a 30-ampere electrical service in most smaller RVs, we can't operate high-draw electric appliances simultaneously. I knelt down under the front of the cabinet below the stove, opened the circuit breaker panel and reset the main circuit breaker. I turned off the heater and Sandy re-started the toaster oven. All was okay, I thought. After a few minutes, however, the smoke alarm began to sound, and we looked over to see smoke pouring from the toaster oven. What Sandy didn't realize was that the toaster oven restarted its cycle after the power interruption, in effect cooking the toast almost twice as long as needed. She began frantically trying to remove the smoking black slices of bread from the oven, while I tried to find the silence button on the smoke alarm. Finally, I had to pluck it from the ceiling and remove the battery. Then I hastily returned to the eggs in the skillet, finding, to my amazement, that they fared just fine. Sandy made some more toast, and we enjoyed a good breakfast in spite of our incompetence.

We decided to take a roundabout route to San Antonio and Corpus Christi, heading west on Texas highway 1431 to Marble Falls, then down U.S. 281 to Blanco, then over to Wimberley before intercepting I-35 again. The rocky hills along the north shore of Lake Travis made for some beautiful scenery, and we enjoyed the diversion very much. One of the downsides to traveling on Christmas day is that virtually no businesses are open. We drove for more than two hours there in the hill country, traversing numerous small and not-so-small towns where there were no restaurants or grocery stores open anywhere. I had planned to get some more diesel fuel in Wimberley, but found not a drop because of the Christmas closures. We finally found a truck stop in San Marcos where we filled up and then went around the corner to a Skillet restaurant, where we settled for a couple of highly substandard hamburgers. 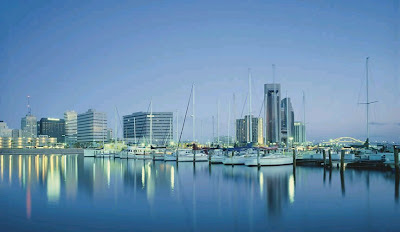 Corpus Christi by the Bay

We stuck with the I-37 to Corpus Christi, as we had messed around and spent way too much time out in the countryside, no matter how enjoyable. Our reservations at the Colonia del Rey RV Park in Corpus were already paid, and we needed to get there before dark, if possible, to avoid another debacle as in Idyll Glen. As it was, the sun had already set when we pulled into the park, but there was a little bit of daylight left to get hooked up. The nice pull-through space made everything easy, and the TV cable worked fine. We were starved by this time so, after unhooking, we trekked back down Padre Island Drive to the Longhorn Steakhouse, where we had an excellent mesquite-grilled steak for two with salad, onion rings, baked potatoes, cauliflower and corn. We couldn't possibly eat it all, and we brought back to Homer enough leftover steak to have some wonderful fajita nachos in a day or two. Back at the trailer and tucked in, Sandy watched an old movie on TV while I surfed the internet looking for things to do and places to eat the next day in Corpus.
Posted by Mike Mills at 11:05:00 PM