Today we decided to make a round robin from the southernmost part of North Padre Island, northward through Port Aransas and across the ferry to Aransas Pass. Since we seem always to leave the trailer late in the morning, we stopped at Snoopy's, which was nestled under the bridge leading from Corpus Christi over to Padre Island. This is a very popular restaurant with a large al fresco dining area overlooking the bay. We chose a table outside, as the weather was a perfect 78 degrees with a light breeze from the southeast. We ordered another fried seafood platter, and we were much more pleased with this one. The fish was battered and fried fish-and-chips style, which was okay, because it wasn't catfish, which I mentioned before, must be fried only in a cornmeal coating to avoid ridicule. I was unable to identify the fish used here, however. It tasted like cod, which would have been appropriate for fish and chips, but hardly indigenous to the Texas gulf coast. The rest of the platter consisted of shrimp, oysters and scallops that were breaded before frying, but the breading was sufficiently light to allow the freshness and tastiness of the seafood to be enjoyed. All in all, it was a very good meal, and we decided this was a place to which we would return. 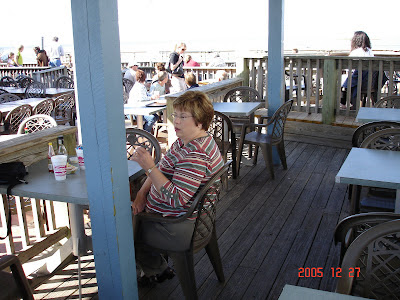 Across the bridge, we turned south into the Padre Island National Wildlife Preserve. This involved a ten-mile trek down the island to a visitor center erected by the National Park Service. 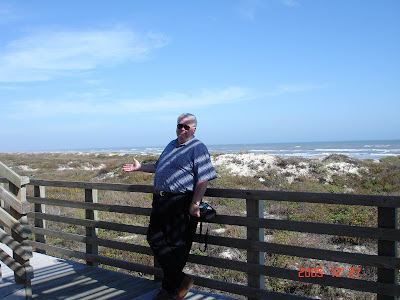 I guess we don't have much appreciation for the sand dunes and sawgrass, which comprised the totality of the topography that was visible during this drive. Surely wildlife out here would be in desperate need of preserving, lest they die of boredom. The visitor center was very nice and modern and looked out over the beach at the Gulf of Mexico. This is the same seashore that you see in Galveston—the water being sort of dishwater-looking and the beach sand a dirty tan color. We were underwhelmed, to say the least. The things that was most off-putting, however, were several information displays under plexiglass at the railing of the deck area overlooking the ocean. Each one of these mentioned not so much the importance of the area as a nature preserve but imparted to the reader a stern lecture about the evils mankind has done to the environment. They warned the visitors of possible tarballs on the beach that were still washing ashore from an oil spill from a drilling rig back in 1997, even going so far as to describe how to remove them from your skin (use baby oil, which I'm sure everyone carries to the beach). Another placard described, with an array of photographs, samples of the rubbish left behind by visitors and that which washes ashore from other continents and from the ships at sea. The narrative admonished visitors to "take away more trash than you bring." Yet another placard warned that the visitor center in which we were standing, and even Padre Island itself, may disappear one day due to the rise in the oceans' water level due to global warming. At this point, I had had enough. This place must have been built during the Clinton administration by a bunch of environmentalist wackos. We retreated quickly to the Hornet, fired up the diesel engine, whose computer I had reprogrammed to produce more power and better fuel economy by bypassing the factory's clean-emission settings imposed by the EPA. Leaving the parking lot with a nice puff of black diesel smoke seemed very satisfying.

After leaving this godforsaken place, we took highway 163 northbound to Port Aransas. This was a nice highway, but the scenery was much the same, except for an occasional house and storefront. Nearing Port Aransas, we saw an increasing number of RV parks and condominiums near the beach. The city itself was interesting. It has a very laid-back coastal feeling and reminded us of a nascent Key West. There were a lot of tourist shops and eat-a-bites, but we settled on a large restaurant named Virginia's On The Beach for an afternoon snack. This had been recommended to us by Kimberly and Tony, our next-door neighbors in Euless (Kimberly is a Corpus Christi native). We were seated on the open-air covered deck overlooking the yacht harbor. Again, the weather was perfect, and we enjoyed the beautiful scene as the sun slowly descended in the afternoon sky. We lingered over shrimp salad, pico de gallo and tortilla chips. The salad had a nice helping of boiled shrimp (which it should, for $13.95), but the advertised remoulade sauce in which it was tossed was desperately in need of more creole mustard. But then, I judge all remoulade sauces by that served at the legendary Johnny Cace's restaurant in Longview, Texas which, in my view, has the best remoulade anywhere. There were also too many black olives in the salad. The tortilla chips were a bit stale and the pico was only so-so. We shared a serving of much-hyped strawberry shortcake afterward and found it almost inedible. The server had touted the shortcake as being "homemade by the chef," but we would much rather have had the strawberries on top of a Twinkie, which would have been an improvement. The great view and Sandy's company, however, trumped the food misses by far and made for an enjoyable time.

Bidding farewell to Port Aransas, we took the short auto ferry across the ship channel to Aransas Pass. The trip took only about five minutes and there were no fewer than six ferry boats shuttling vehicles from one side to the other. On the Aransas Pass side, there was a very long line of traffic waiting to cross, and I expressed my puzzlement as to why building a bridge over such a short span of water wouldn't be a much more economical arrangement than operating all these ferry boats at no cost to the users. Since we had already visited Aransas Pass the day before, we pointed the Hornet back toward Corpus, some 18 miles away.

After descending the Corpus side of the tall bay bridge, we stopped downtown at the Science and History Museum, which was nearby the Lady Lex. This museum had some mildly interesting exhibits, the most memorable being displays of rocks and minerals that revealed the state stone of Texas (the petrified palm) and the state gem cut (the star topaz). Sandy and I marveled at this, as we had never heard of either of these. 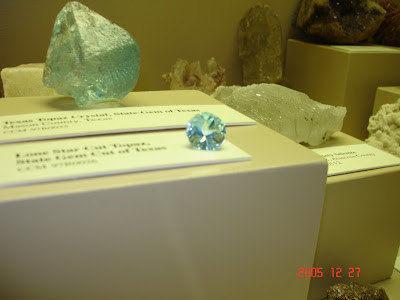 After looking around for a while, we heard the announcement of a tour of the Pinta and the Santa Maria. Not knowing what to expect, we joined the other tour participants, who numbered about six. One of these was a curly-haired Frenchman in his early twenties, accompanied by a female of approximately the same age. Both had an overabundance of hair, but the girl had the unfortunate genetic gift of a rather noticeably misshapen nose. Instead of having the normal indentation at the top of her nose where it connects to the brow, her nose sloped straight down to her nostrils. I couldn't help but think that it looked for the world like the hood ornament on a 1954 Pontiac--you know, the one that resembled an Indian chief cast in amber plastic? On the front of his t-shirt was written, in Spanish, "Sex Instructor-First Lesson Free." The tour guide, a middle-aged male who spoke a bit of French and Spanish, took great amusement in this and delighted in translating the phrase aloud for all to hear. As he finished, the Frenchman's female companion blurted out, giggling, "I am his best customer!" I marveled at this exchange, wondering what possibly could have compelled her to believe the rest of us needed to know any of this tawdry information. 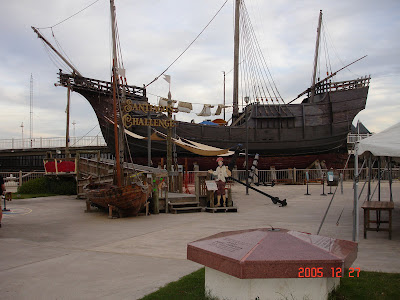 Replica of the Santa Maria

The tour took us outside the museum into an open-air display built especially for the ships, which were constructed as seaworthy vessels back in 1983 to replicate, as closely as possible, the original ships sailed by Columbus. These two ships, along with another replica, the Nina, were actually sailed on an ocean voyage in 1990-91 to commemorate the 500-year anniversary of the discovery voyage in 1492. I was amazed by the handiwork of the construction; this obviously represented an enormous effort by the artisans who crafted these large vessels entirely of wood. Some interesting tidbits offered by the tour guide (who was still flustered and giddy over the t-shirt thing) revealed that the ship's crew slept on the main deck due to the omnipresence of rats in the hold. They also cooked their meals on the main deck, in a metal fireplace with a tray to hold the coals that would otherwise ignite the wooden deck. The ships were made of large wooden planks and, in an attempt to make them as leakproof as possible, tar was used to fill the cracks between the planks. Even so, it was impossible to keep water from leaking into the ship, eventually sinking it if not removed. So, each ship was fitted with a bilge pump made with an assembly of tubes and a leather holding pouch which had to be squeezed regularly by the crewmembers, causing the water to be suctioned out of the hold and overboard. At the beginning of the voyage, kegs of drinking water were taken aboard, but they soon became fouled with bacteria a few days into the voyage. Also taken aboard were kegs of wine, which were mixed with the water to kill the bacteria. This may explain Columbus's arrival in America when he thought he was somewhere else. 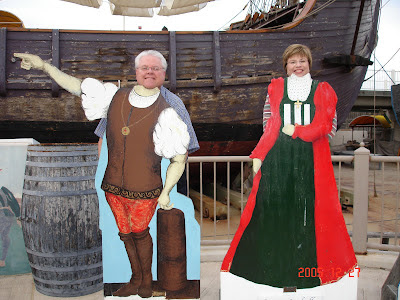 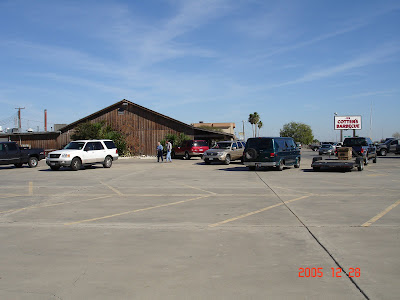 The museum closed after our tour, and we decided to drive over to Robstown to eat at the famed Joe Cotton's barbecue, a restaurant that I had heard of for many years. We found Robstown to be a particularly non-descript place, located in the middle of the very flat coastal plain and surrounded by tilled farmland. Most of its residents appeared to be of a rather low economic status and the place just seemed sort of seedy and worn out. We finally found Joe Cotton's, only to discover that it was inexplicably closed for the evening. Even so, a steady stream of vehicles were driving into the parking lot, noting the darkened sign and building and driving away. This included me, of course, and I was immediately reminded of my similar misfortune last summer when I found McClard's barbecue closed in Hot Springs, a misfortune from which I still have not quite recovered. We decided to protest by eating Mexican food. I picked Taqueria Alto de Jalisco (which I roughly translated, "Tall Taco Joint of Jalisco") nearby, whose parking lot was crowded and contained a police car, always a good sign. Sandy and I split a Tacos al Pastor platter and a serving of crispy beef tacos, along with the requisite beans and rice and charro beans, as well. It came with pico de gallo and guacamole, and it was wonderful. We ate like pigs, forgetting for a while the inhospitable Joe Cotton's.
Posted by Mike Mills at 11:11:00 PM