This day, we were headed out to see the aircraft carrier Lexington, which had been decommissioned by the Navy in 1991 and donated to the City of Corpus Christi. We had a small snack instead of a full breakfast, anticipating that we would want to be hungry at lunch and dinnertime as we tried some of the restaurants that had been recommended to us or that I had found on the Internet. After enjoying a drive down Ocean Drive that fronts on Corpus Christi Bay, we took a photo of the original Whataburger restaurant near downtown. It was now a large, modern two-story restaurant, but we were told that the original burger joint was very modest by comparison. 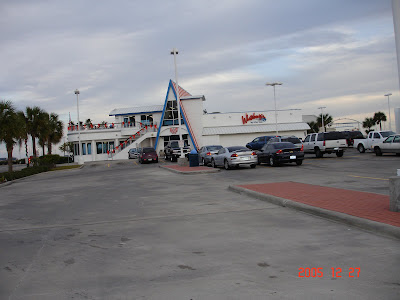 We stopped for lunch at Catfish Charlie's on McArdle Road and had a combination of fried shrimp and fried catfish filets. These were very fresh and tasty, but the coating on the fish and shrimp had too much flour and not enough cornmeal for our liking. However, they had, hands down, the best homemade tartar sauce we had ever eaten, and wonderful hot hushpuppies. 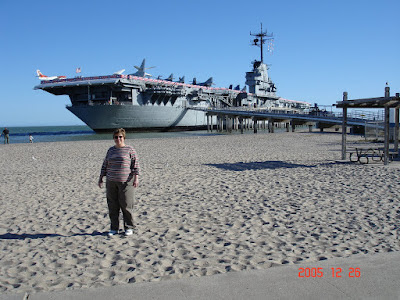 We arrived at the Lady Lex, as the carrier was known during WWII, along with the nickname Blue Ghost. (In keeping with the latter nickname, the ship is illuminated at night with ghostly blue lights, giving it an almost eerie countenance at its moorings in Corpus Christi Bay.) We boarded a tram to take us from the beach up the long concrete and steel ramp built to allow access by tourists. I was quickly struck by the enormity of the ship. It is as tall as a 19-story building and longer than three football fields. Entering into the hangar deck from the ramp, it was amazing how cavernous an area it was, obviously capable of housing a large number of WWII fighter aircraft. As guys must do, I had to go below and tour the engine room. I warned Sandy that there would be a number of staircases down to the bottom of the ship and just as many back up again, but she wasn't deterred. She has a difficult time with stairs since her ankle surgery last February, and I was apprehensive for what I figured lay ahead. My suspicions were verified as we eventually descended five staircases to reach the engine room. On the way, however, we saw a number of other interesting parts of the ship, including the galley, dental clinic, sick bay, post office, chapel and firefighting headquarters. The engine room contained two huge compound steam turbines driving two shafts from massive reduction gears that turned the propellers at a maximum of around 300 RPM. The steam was generated from a series of boilers that burned oil fed to them from tanks in the hold of the ship containing more than a million gallons of the stuff. The turbines also turned generators that delivered 440-volt electricity with enough power for 5,000 homes. It was quite incredible to take in the huge scale of the machinery and superstructure evident there in the bowels of the ship. I was most impressed by the technology available in the late 1930s to construct this leviathan of the seas. All this was pretty much lost on Sandy, who is certainly counted among those to whom things mechanical are not particularly friendly. What goes on under the hood of a car, for example, holds about as much interest for her as making lace doilies would hold for me. 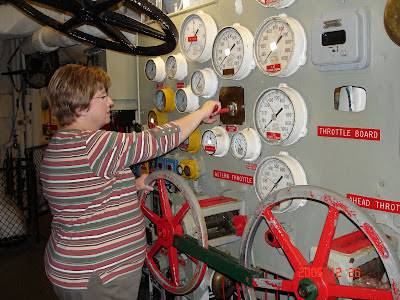 We made the long trek back up the stairs to the hangar deck, but not without what I know was a good deal of pain for Sandy, as her movements were halting and unsteady. I felt very sorry to have put her in this predicament, although she didn't utter a syllable of complaint. Once upstairs, I proposed that I would go to the upper decks by myself to see the captain's quarters while Sandy rested on a nearby bench. She protested a bit, but finally gave in. I told her I would take photos, and she seemed mollified by this. 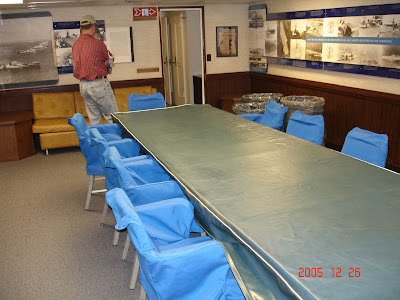 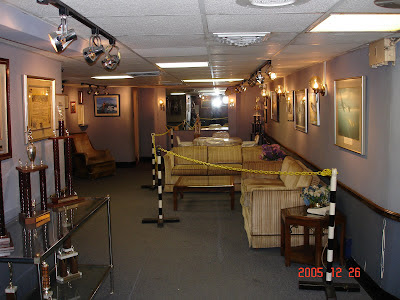 The air traffic and combat control centers, while technological marvels of their day, nevertheless seemed prehistoric in their reliance on the use of men with grease pencils, writing on glass panels to plot the movements of aircraft. This stood in contrast to modern ships, where computers control practically everything.

After this, we went to an IMAX movie, included in the price of admission to the ship and playing in a new theater constructed near the stern on the hangar deck (this gives you another idea of how large a place it is). The movie was about fighter pilots in a training exercise and was only mildly interesting.

Afterward, I wanted to go up and see the bridge, and this time Sandy insisted on going up as far as the flight deck, which required climbing another three flights of stairs. She would not be deterred, and up she went, although I knew she would later regret it. On the hangar deck were parked a number of decommissioned fighter aircraft, and we were surprised by the amount of open deck space still remaining empty. A carrier's flight deck appears very spacious except, I assume, when you're trying to land an aircraft on it. 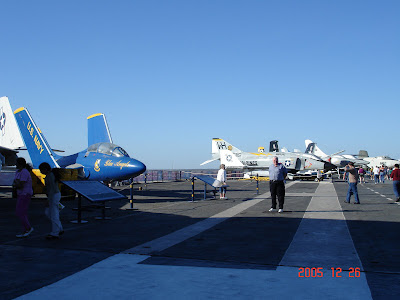 Flight Deck on the Lady Lex 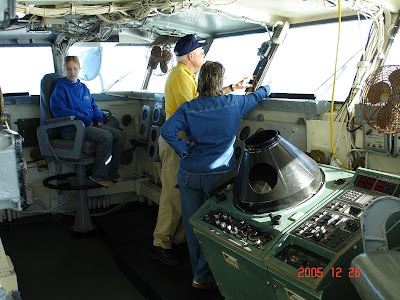 Bridge on the Lady Lex

The bridge was surprisingly small. There were four leather chairs, raised high off the floor for the senior officers, the captain always seated on the front left chair. No one else was allowed to sit in this chair, we were told, when the ship was in motion. Behind the bridge was the pilot house, where the helm was controlled by a wheel no bigger than that of a truck. Behind the pilot house was the captain's day room, which had a bunk and where the captain would ordinarily spend most of his time while at sea. Behind that was the chart room and navigator's station with tall angled tables where the maritime charts would be spread out to monitor the ship's progress. Again, this area seemed almost quaint, given that all of it would be obsolete nowadays when navigation is controlled by computers and satellites.

We then left the Lady Lex, greatly enjoying my time aboard this living piece of history and her important role in some of the most significant naval battles of WWII. She was damaged on two occasions during the war—once by a kamikaze attack and again by a torpedo to the stern. Twenty-seven sailors lost their lives in this attack, but the Lady Lex dealt crippling blows to the Japanese navy, from which Japan never recovered. I imagined what it must have been like aboard that mighty vessel when it was launching planes or under attack itself, and I swear I could almost hear, in a haunting muffled sense, little echoes of the cacophony that must have been deafening while those desperate struggles were taking place more than sixty years ago. My heart was full as I left, mindful of the history, the sacrifice and the pride that I felt during the experience.

We headed out S. H. 35 over the long bay bridge toward Aransas Pass and Rockport to check out these places we had often heard about but never visited. Aransas Pass was a bit of a yawner, but Rockport was a somewhat more picturesque burg with a significant amount of residential development along the coastline, especially in an area known as Fulton Beach. Both places are havens for fishermen and there were RV parks—many, many RV parks—all fairly crowded. The snowbirds were here in force, and it was no wonder. The weather here in late December was just perfect, each day in the 70s or low 80s, with plenty of sun to warm the bones. It's easy to see the appeal, especially for those folks who come down from the northern and eastern states, which are basically like deep freezers during the winter. Who wouldn't want to escape to a warm seashore area where the cost of living is still low?

By this time, we were getting hungry, so we stopped at the Big Fisherman restaurant near Aransas Pass. This place was recommended by Bubba Barker's mom and dad, Aljean and Barry, and Barry said not to miss the seafood gumbo. This was a huge place and very popular. We tried the gumbo, called "Texas Gumbo" on the menu. It was quite spicy, and just as good as its recommendation. However, we were unimpressed with the fried seafood platter and the peel-and-eat shrimp. The fried offerings had too much breading, and we consider catfish that is not dusted in cornmeal before frying to be an act for which the cook would need to pray for forgiveness. The shrimps were okay, but they would have been much better if cooked in a nice spicy boil of Cajun spices. Throngs of other patrons seemed to have no problem gobbling down their dinners, and we do acknowledge that we are incredibly hard to please.
Posted by Mike Mills at 11:18:00 PM