A Rolling Phannie Gathers No Moss

After a week's stay at our home port, our doctor and dentist visits had been accomplished, and we had reconnected with friends, trimmed some trees, had the garage door fixed, and I gave Phannie and Mae a wash job. On our way back from Houston a few days earlier, we had driven in the rain for a while, so both vehicles needed a bath. I ran Mae through a nearby car wash, but I washed Phannie myself, which is a lot like w*rk, something that I usually go to great lengths to avoid. I guess my principles have their price, however, as I saved about a hundred bucks in the process.

Russ, my crackerjack electronics guru, also came by to take a look at the new Kenwood radio/disk player he installed in Phannie. I had been having a problem now and then with Sirius/XM reception, so he decided the satellite antenna had been placed too close to one of the air horns on Phannie's roof, so he moved it to a different location.

Once these things were out of the way, Sandy and I began to ask ourselves, "What are we doing here when we could be on the road?" We had been planning to visit another rally, this time of Tiffin motorhome owners next weekend in Galveston, so we decided to leave a bit early and take a detour to see some friends and relatives in central Texas.

Our first stop was in Waco, where we met Eddie and Jan, some really nice Wacoans who are mutual friends of Ed and Marilyn, Bob and Janet, Jesse and Ginger, Mike and Marian, et al. This cabal of RVers run around together when their paths cross--usually in Colorado in the summer and the Rio Grande Valley in the winter--and a good time is had by all whenever they do. It continues to amaze me, after all these years, how common it is for RVers to be very personable people whom we would be happy to call friends. Eddie and Jan were no exception, and we had a great time over lunch swapping stories about each other and some of the other characters among the cabal regulars. 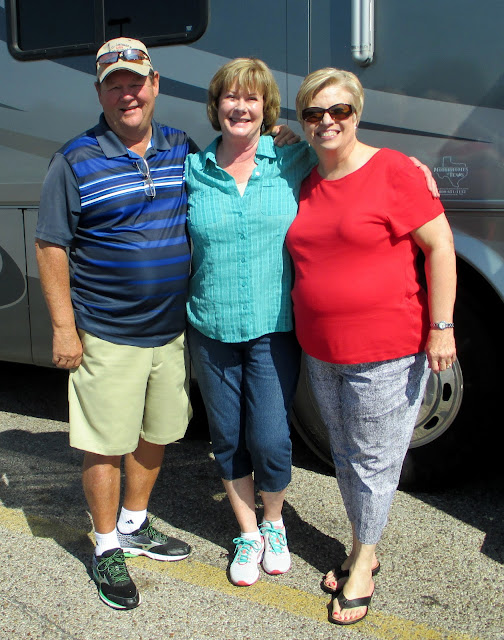 After saying goodbye to new friends Eddie and Jan, we drove to Salado, where we stopped at Tranquil Gardens RV Park. This little park, in its very rural setting, was hardly one of the "best of the best," whose amenities we tend to prefer and which we highlight via a link on the home page of this rag. While the sites are fairly level ones with full hookups, including 50 amps, the whole place is gravel and not what you would call picturesque.

Earlier, when we first arrived at the office, consisting of what appeared to be a well used manufactured building, we were met with many signs and notices on the windows, including some exhorting us to drive no more than five miles per hour and insisting that we have insurance, as the park is responsible for, basically, nothing bad that could happen. Ours was the only big rig in the park, and there appeared to be several relatively permanent residents. So what seduced us to stay here? Well, once again, it appears my standards are for sale; a stay at Tranquil Gardens can be had for a dirt cheap $20 a night with Passport America.

The name Tranquil Gardens is partially a misnomer, as I could identify nothing that resembled a garden. However, the "tranquil" part was accurate; the park was quiet--very quiet, probably through the insistence of its slightly irascible owner, who patrolled the area frequently in his omnipresent golf cart. I learned through the locals that this guy was legendary in enforcing his five-mile-per-hour rule among his guests. This, of course, gave me pause to ponder exactly how he gauged the speed of vehicles, given the absence of a speedometer or radar gun on his golf cart. At any rate, I am not inclined to test the rule since my pace is relatively slow these days. (Since I retired, I have made a conscious effort to dispense with all the activities possible that require me to be somewhere at a specific time--especially if that time is in the morning.) 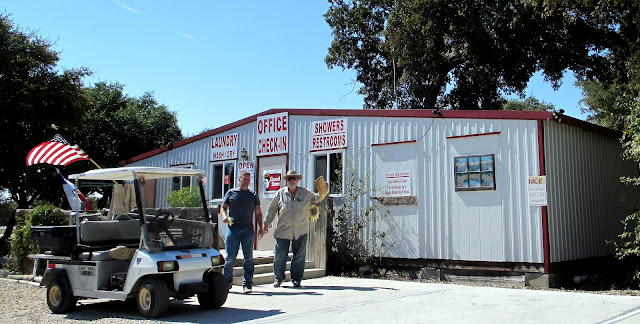 As depicted in the photo above, the owner is a bearish man with whom I wouldn't necessarily wish to tangle. Wearing a long sleeved khaki overshirt, he seemed much too warmly dressed for the 88-degree Texas afternoon. He was more firm than gruff, but his no-nonsense demeanor was not necessarily off-putting, as he was obviously not going to put up with any monkey business in his park, and that's fine with me. I also appreciated his prominent display of the American flag. I mean, what's not to respect about a patriotic guy who doesn't suffer any rabble-rousing in his park? Good for him.

When we arrived at the park around 4:00 p.m., I went inside the office to register and found it unoccupied. Looking around, I noticed several more handmade signs giving instructions to patrons finding themselves alone in the office. One of the signs indicated that I should "ring the bell." However, the location of the bell was not immediately evident, so I began to look around the room. When my scan reached 180 degrees behind me, I saw a button on the wall beside the door through which I had entered. Pointing to the button were a couple of dayglo arrows that had obviously been fashioned so as to highlight its location. As I extended my index finger toward the button, I was startled by a rather loud voice from a speaker on the wall behind me.

"I see you," said the disembodied voice."I'll be there in a minute." I quickly withdrew my finger and busied myself by thumbing through one of several old magazines on a nearby table.

Then I noticed a video camera in one of the corners of the room near the ceiling, so I knew that I was being watched. The imposing owner soon appeared in his golf cart in the driveway behind Phannie and Mae and methodically recorded the numbers of their license plates. Then he came inside and greeted me in a friendly but businesslike way, where we completed the paperwork and he reiterated the rules, most of which I had already memorized from the ample display of signage outside and inside. Hearing no pushback from me at the end of his recitation, he seemed satisfied that I would not likely be a troublemaker and collected the rental fee in advance.

"Cash only," he said, since I was using my Passport America discount. (The only other option was to write a check; he doesn't take credit cards.)

I suppose some folks might resent the somewhat brusque officiousness of the owner, but I didn't, probably because I found him to be an interesting character. I almost wish I had learned more about him.

Later that evening, we joined a number of relatives on Sandy's side of the family for dinner at Jody's, a longtime Temple restaurant specializing in all things fried. My chicken fried steak and onion rings were, as expected, delicious, even though I could just visualize my doctors waving their fingers at me for being naughty.

Here are several family photos that will be interesting only to, well, family, whom we do indeed revere:


The next day, we stopped at Cracker Barrel in Killeen to catch up with longtime friends Linda, Darla, Jody and John, who is a pastor at a local church. We had a great time and literally closed the place down. Thanks to all for meeting up with us!

Tomorrow we leave for Galveston.

Thank you, Lord, for this wonderful life; please forgive me if I do not appreciate it enough each day.