On this day, we were mostly on our own, doing what we normally do--wandering around with no real plan and stopping at places that look interesting. Since we were up at the crack of eight and ready around noon, it occurred to us that it was lunchtime. (We are taking this retirement thing seriously, and we don't apologize.)

We decided we hadn't had barbecue for a while, so we dropped in at Leon's, a modest place on Broadway that has been run by a friendly black family for a long time. When we pulled up at the curb, the joint looked very promising as one of those local dives where they know what they're doing. And so it was with Leon's.

When we entered, we got an enthusiastic welcome and, when we sat at a table near the door, the waitress suggested a better table for us in a quieter part of the room, and we accepted. Nice touch. 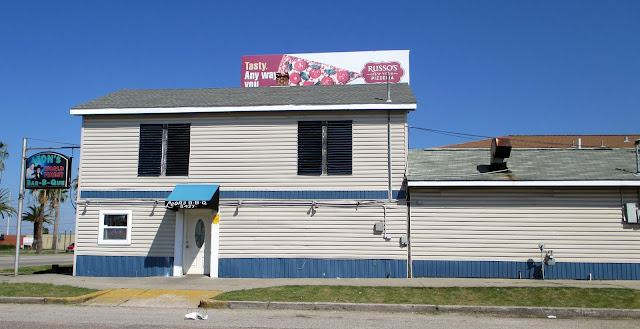 Since we often find that portions of food served at restaurants are very large (undoubtedly to justify a higher price), we have gotten into the habit of sharing a single order, and it turns out that it is almost always plenty for both of us. So, I asked for a single two-meat combo--ribs and brisket--without sides, for us to share. And the photo below shows the generous serving we got for $9.95. We couldn't begin to eat it all and, as a result, we had leftovers for two more meals. What a deal!

The barbecue? Well, it was very good and very smoky, with a nice bark. We would go back. 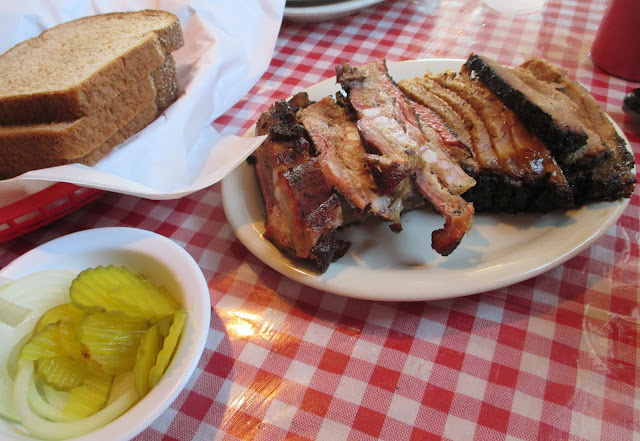 Galveston is steeped in history, much of which is available to anyone online, so I won't bore you by droning on and on about it here. But I am going to mention a few things that were surprising to me, even as a native Texan:

During the Civil War, Galveston was briefly under the control of the Union Army after a brief battle with Confederate troops in late 1862. On New Year's Day, 1863, however, the Confederate troops under General John Bankhead Magruder, took the city back and kept it under Confederate control until the end of the war. Having ancestors who served in the Confederate Army, I was not displeased to learn of this turn of events.

After the war, Galveston was the largest and most prosperous city in Texas, due to trade through its port, which was the most important in the state.

Because of the importance of Galveston, many "firsts" can be attributed to the island. Here are a few of many firsts applicable to the state of Texas:

Sadly, the island had its share of bad times, such as the great fire of 1885, in which much of the town burned and left 3,000 homeless. There was also the great storm of 1900, in which 6,000 perished, after which a seawall was built that saved the city from a more intense storm in 1915.

If you are a history buff, there is obviously plenty to interest you here. We got this information from displays at a history center at the local library. Galveston had a nice county museum that was damaged in Hurricane Katrina. Although it remains closed for now, it is supposed to reopen at some point. There is also an interesting railroad museum downtown, if you're a train buff.

A drive around the island yields some good views of the port, which was eclipsed in importance by Houston after the 1900 storm and the construction of the Houston Ship Channel. Cruise ships dock imposingly in the midst of downtown Galveston as thousands of passengers embark and disembark, mostly on Caribbean cruises. 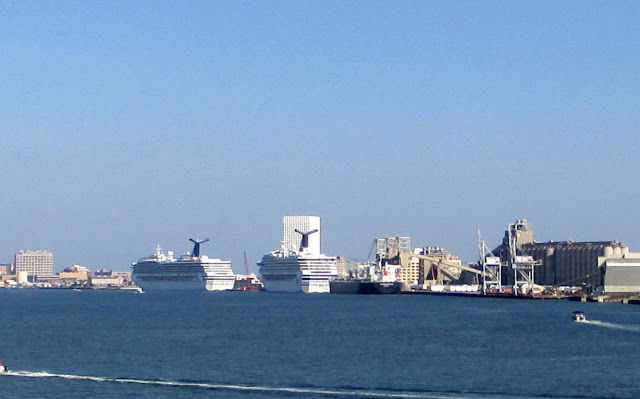 I haven't written much about the rally we were attending, largely because we are still in an exploratory mode with rallies. We've sampled a few clubs with mixed results, but we have only positive impressions about this one. This club is open only to owners of Tiffin motorhomes, so we have a common interest with the participants from the get-go, and we've found them to be very friendly and down-to-earth people, whom we hope to get to know better. We will be attending more of their rallies in the future, so we'll share photos and impressions at a later time.

One thing we've learned about RV clubs is that they are very different, depending on the interests of the members. For example, some are centered around playing golf or other sports. Some prefer remote locations while others meet in places where there are lots of urban activities. Some are a bit clique-ish, while others are very open and friendly. We think one of the best rallies we've attended is RV Dreams; Howard and Linda Payne work hard and deserve their reputation for success in this area.

Another issue with joining a club and attending rallies is that such regimentation may not work well for couples like us who like to travel long distances for extended periods of time. It may be more attractive for those who are sometime travelers. We'll see. What we do know, however, is that we've met a lot of really nice, friendly people, and that's a good thing.

Ever on the hunt for good seafood, we tried a new restaurant named Blvd. Seafood, appropriately named, as it is on Seawall Boulevard. It was a nice place and fairly upscale, with prices to match. Our dish of grilled fish, scallops and shrimp was very good, but we thought it was a bit skimpy for the price we paid. We also ordered their bread pudding, which was prettily presented but a bit bland. Surprisingly, the owner of the restaurant later came to our table, unsolicited, and comped our dish, saying that he had just tried the bread pudding himself and found it lacking. I think this was a first for us in all the eating out we've done, so we were impressed. I would probably dine here again just for the integrity shown by this guy.


In the next post, I'll include some information on our tour of the Bishop's Palace.

Thank you, Lord, for this wonderful life; please forgive me if I do not appreciate it enough each day.