Galveston has always had a special meaning for me, especially as a child. It was the place where I first saw the "ocean" and experienced waves coming ashore. For me as a kid, the Gulf of Mexico, although technically not an ocean, was no less wondrous in its vastness. I had never before seen a body of water that had no shoreline visible in the distance and, when my father explained why, I instantly internalized the concept of the Earth as a sphere. It was a moment of clarity that I still remember.

It was also the home of a favorite aunt and uncle, the Munsters, whose house was perhaps the favorite trick or treat target on the island at Halloween for obvious reasons. My aunt was a wonderful rotund woman, perennially smiling and affable, and a great cook to boot. It was she who first introduced me to freshly cooked seafood, and my appreciation for it has never waned. With this in mind, I was not unhappy to return to the island, as we have done from time to time, to find some good seafood and see what has changed.

The Sandpiper RV Park, site of the rally, is a very nice park right on the gulf below the seawall and thus protected from the noise of Seawall Boulevard above. The staff is friendly, and the concrete roads and sites are level, so A-plus on the park.

Because of the late start from Salado due to my repairing Phannie's turn signal and our essential stop in the Woodlands to visit the grandkids, we became hopelessly mired in the Houston rush hour traffic. This caused our arrival in Galveston to be after dark, something that I am loath to do. I also had given no thought to what that might mean in terms of our welcoming committee, which happened to be about a trillion mosquitoes.

I was wearing shorts, as I customarily do in warm weather, and it didn't occur to me that the news of my bare legs would be telegraphed to every living mosquito in Galveston county once I exited the coach. As I made several trips around Phannie's perimeter hooking up the various umbilical cords and hoses, I began to feel a great deal of insect activity around my lower extremities. I trained my flashlight onto my legs and was astonished at an entire squadron of attack mosquitoes as they happily drilled little holes into my cholesterol-infused stumps.

"Yum! Well marbled and tender," I thought I heard one of them say.

I beat a hasty retreat back inside the coach, but whelps were already beginning to rise where the little buggers had their way with me. Needless to say, it was not to be a pleasant night for sleeping--itching, yes; sleeping, no.

Someone said that I should put hot towels on the wounds before applying medication, but I decided to try my own cure: A pint of Blue Bell buttered pecan ice cream taken orally instead. And yes, it did make me feel better.

The rally participants elected to travel via the Bolivar Ferry to Crystal Beach for lunch one day, and it was a nice diversion to sail the three miles across Galveston Bay and watch the seagulls and dolphins put on their show for the passengers.

The Bolivar Ferries have been operating since 1934 under the auspices of the state of Texas, transporting vehicles from Galveston Island to the Bolivar Peninsula, providing a waterborne connection of state highway 87. However, private entities have operated ferries across this bay since the 19th century. The cost of operating the 540-ton ferries is about $12 million per year, yet this is considered more economical than the building of a bridge or tunnel across the bay. This may finally give way to practicality, however, as the traffic has increased to a point where a wait for boarding might be two hours at busy times.

After landing at Port Bolivar, we drove another ten miles or so to Stingaree's in Crystal Beach: 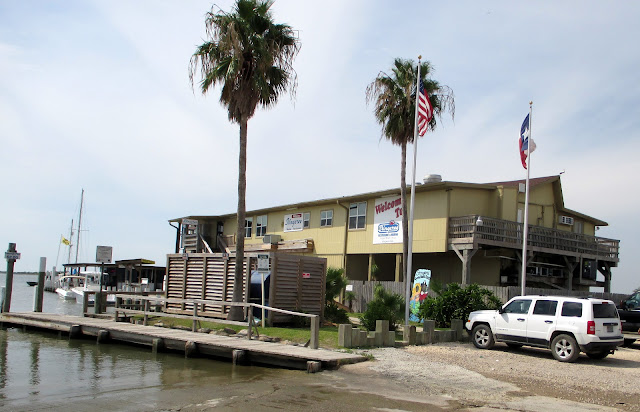 We would never have found this restaurant on the Intracoastal Waterway, had we not had Carol along to guide us. And I must say, it was a wonderful find! The seafood was incredibly fresh and delicious, and the price was right. We will return here before we leave, for sure. 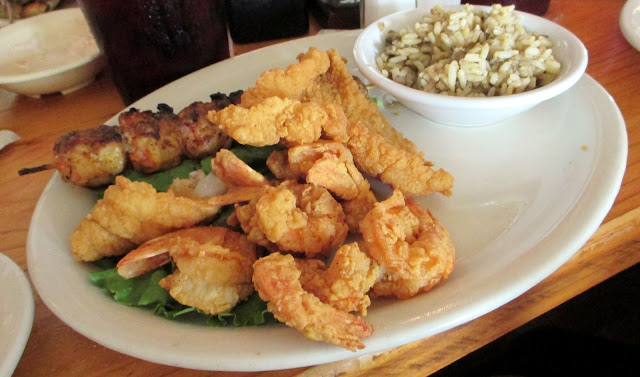 With our tummies full, we returned to Galveston and our coaches for a little nap. Later on, we all met at the pool for a weiner roast.

Thank you, Lord, for this wonderful life; please forgive me if I do not appreciate it enough each day.
Posted by Mike Mills at 10:52:00 PM