Fulltiming Food Prep: What Works for Us

When we went fulltime, there were many things about which we had to "get our mind right." Perhaps the main one was optimizing our drastically reduced living space. Every square foot was precious, including the space allotted for food preparation. Gone were the full-sized appliances in our stick and brick house, except for the residential refrigerator we installed in Phannie, which I have already characterized as one of the few absolute essentials for us to do this gig.  Gone were things like the six-burner cooktop, the extra-wide Viking oven, the warming oven, the Kitchen Aid dishwasher and mixer and the large Cuisinart food processor, etc.

As it turned out, we certainly didn't need these things in their oversized form since there are just the two of us here in the bus 99 percent of the time. We found we didn't even need Phannie's three-burner propane cooktop. With our induction plate, Breville oven, electric skillet, crockpot and microwave oven, we just leave the propane cooktop covered, putting the extra counter space to good use. We don't miss the dishwasher because we use paper plates most of the time. Yes, we can set a nice table when needed, but why do that for everyday dining? Doesn't make much sense to us. Washing the few pieces of cookware and utensils we use takes only a few minutes and, oddly, Sandy says she enjoys it--her reasoning for such known only to her and the good Lord, I guess. It might have something to do with the fact that I do most of the cooking, which she doesn't enjoy as much as I do. And, since I abhor washing dishes, I think both of us see it as a fair tradeoff.

Why an electric skillet, you may ask; doesn't that take up some of the valuable space I'm talking about? Well, not really; when not in use, it tucks away nicely above the Breville oven. And, if you have a skillet that's well designed, there's nothing better for controlling temperature over a large cooking surface. I learned through experience to avoid buying an inferior electric skillet that has a cooking element like the one on the bottom of this cheap model: 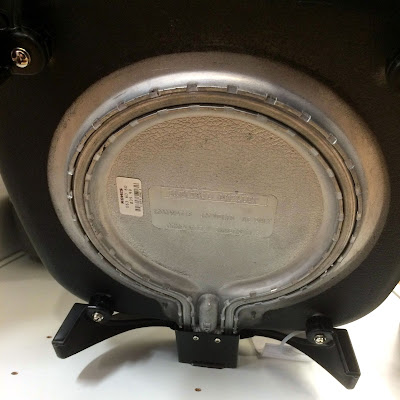 This type doesn't heat evenly in the middle of the skillet. I spent a little more dough on this Nu-Wave model that has a much better heating element design: 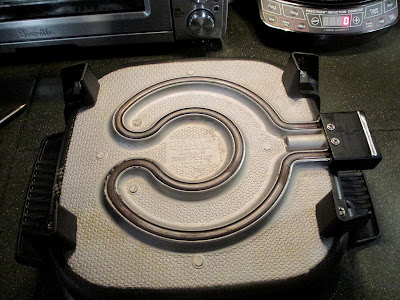 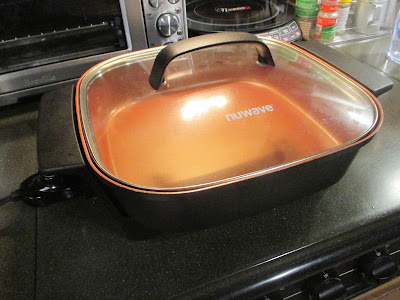 The main reason for using the electric skillet, I guess, is that you tend to acquire that to which you are accustomed. My mother, in her later years, was an avid user of an ancient electric skillet almost exclusively, and she turned out many memorable meals with that thing.

We also upgraded our induction cookplate to this Nu-Wave model: 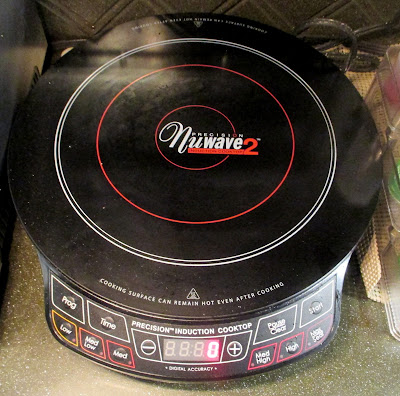 This is a big improvement over the Fagor brand we had previously. It's much more powerful and has really accurate temperature control, too. If you can't have gas, this has to be the next best thing. We use it when we don't need the large surface of the electric skillet. Amazing technology, this. It will heat a pan to blazing hot in no time, yet the cooking surface stays cool.

We've found we do need a food processor now and then, but the big Cuisinart we had just took up too much space, and we certainly didn't need anything with a capacity that large. I found a really neat little Ninja version that seems perfect for our small needs. I even made a short demonstration video (that was made, I confess, mostly just for the novelty of doing a video; besides, you get to see, well, me! What could be more enjoyable?) Click below to take a look:

Well, what do you think? Do I have a future in films? (One of the nice things about getting older is that I can make a fool of myself like this and people don't think much about it, not that I care one way or the other.)

We also use our small Weber Q grill fairly often when the weather permits. And I've posted previously about this and the Breville oven, which must be the best small countertop oven ever made.

So, there you have it. It's what works for us, cooking-wise. But we acknowledge that it may not work for others. I think fulltimers settle into their own system after a while, and all that matters is that they like it.

Another thing we upgraded recently was the light over the dining table. The small factory-installed version has always given off too little light, and I finally became tired of squinting over my food. I'm sure it has nothing to do with my aging eyeballs, does it? 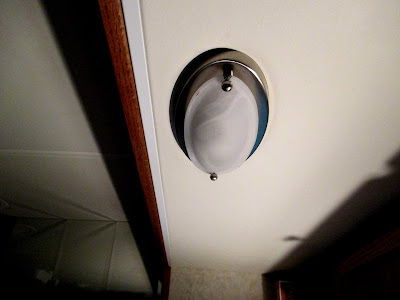 I got this one off eBay, and it works much better: 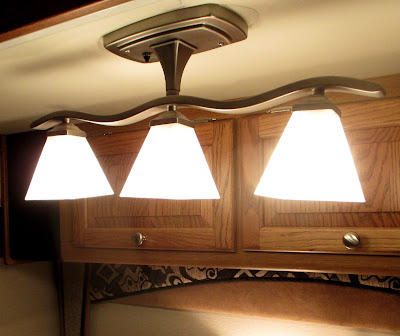 As you can see, we've been staying busy here on the shore of Lake Conroe. It's been a fine holiday time with the kids and, in a couple of weeks, we'll be making our way down to the Rio Grande Valley, where we'll spend our last month of winter before heading north again. Here's hoping your holidays were enjoyable, healthy and safe.