After making up my mind to get recurrent as a pilot, I had to get a medical certificate from an FAA-designated physician. Because of some old medical issues, that took a bit longer than I had anticipated. I had to undergo a few extra tests, but eventually, I was judged pretty healthy for an old guy. In possession of the required document from the flight surgeon, I decided to go to a rural airport to do the required flight check. That's the kind of sleepy airport where I learned to fly, and I thought it would be neat to recapture that bit of nostalgia. I had been flying in and out of very busy metropolitan airports for most of my career, and returning to my roots would be a treat, I thought.

I arranged to fly with a young local instructor named Wayne at the Huntsville, Texas airport in a rented Cessna 172. He would be responsible for conducting my Biennial Flight Review. (This is the FAA nomenclature for a general aviation pilot's required flight check with an instructor every 24 months to retain qualification.)

The airplane to be used was a single-engine, high-wing model that I hadn't flown in 50 years. Before we went outside for a preflight inspection, Wayne asked what my previous flying experience had been, and I related to him my flight time and that I had been flying large commercial jets. He paused for quite a while, then he turned to look at the little Cessna in front of us. He then looked back at me, saying, "And you want to fly that?"

I explained that I had retired from commercial flying about 20 years ago, but that now I wanted to be able to fly for fun and take my grandsons flying. Wishing to put him at ease, I also told him that I had no illusions about how rusty I might be and that he should assume nothing as we went forward. I told him I would follow his lead, and he would not have to worry about my being a know-it-all.

He asked to see my pilot and medical certificates, and he stared for a while at my Airline Transport Pilot license and the string of type ratings listed thereon. (Pilots who fly large aircraft require on their certificates special endorsements, known as "type ratings," for each airplane type flown.)

This is a sample of a pilot certificate issued today. It is made of plastic and is about the size of a credit card. Type ratings, if any, would be listed on the reverse side. Private Pilot certificates are the most common, followed by Commercial Pilot and then Airline Transport Pilot: 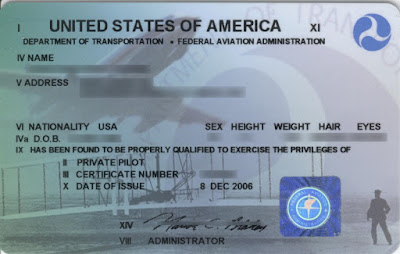 This is a copy of the first pilot certificate, issued in 1927 to a William P. McCracken. He looks pretty happy, doesn't he? It's a shame we don't have photos on today's certificates; I would be tempted to wear goggles, too! 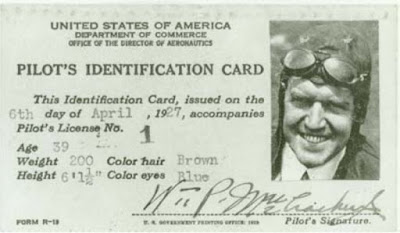 Above is license number one. Since 1927, around five million have been issued. Of these, about 800,000 are active now in the U.S. Doing the math, about one person in 400 is a licensed pilot. About one in 4,000 holds an Airline Transport Pilot certificate.

"I haven't seen a certificate number as low as yours in quite a while," Wayne said.

Seemingly satisfied, he motioned toward the airplane and said, "Well, let's go see how much you remember."

I should mention that I had done a good bit of online familiarization with the Cessna's flight manual and checklist beforehand, so I knew pretty well what to expect in terms of systems, numbers and limits that I would need. In doing so, I was struck by the relative simplicity of this information. Having had to spend weeks learning a massive amount of incredibly complex data about the jet airliners I flew, the little booklet-sized Cessna manual seemed almost infantile by comparison. (You should know that today's airliners are much easier to learn and operate, because so many of their systems are automated. The old airliners I flew had almost no automation, relying more on the knowledge and skill of the pilots who, as humans, were occasionally subject to error. For that reason and others, flying is a good deal safer today.) Even though the Cessna information was simple, I paid attention anyway; when you're flying an airplane, there's no such thing as too much information about the machine you're operating.

Wayne took me through a thorough preflight inspection, and I found that little had changed from the preflights I remembered from my past association with small airplanes. It certainly wasn't complicated, but it occurred to me that it had been decades since I had conducted an exterior preflight. In the larger airplanes I had been flying, these 'walkaround' inspections were usually done by the flight engineer or first officer.

Satisfied with the preflight, Wayne and I settled into the cockpit, which was WAY smaller than I remembered. Since neither of us is exactly skinny, we found ourselves quite close and personal. Fortunately, both of us seemed pretty fresh in the hygiene department. I pulled out the checklist and began to locate all the controls, switches and gauges that I would be needing. This was almost child's play after the layout of my old 727. See the comparison below: 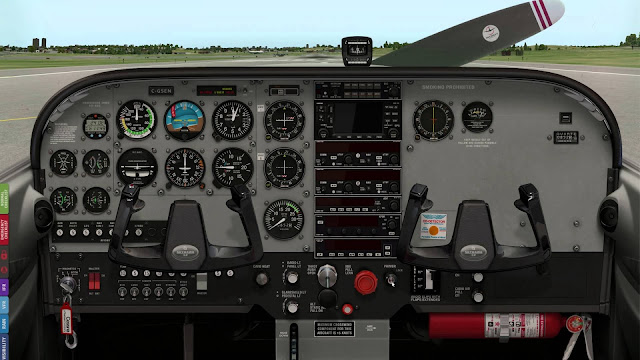 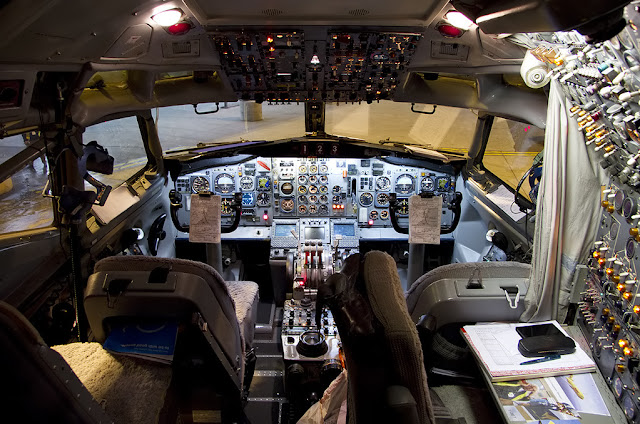