Detroit and the Henry Ford Museum

After a very enjoyable visit with Ed and Marilyn in Hannibal, we made our way to Monroe, Michigan with overnight stops at Champaign, Illinois and Fort Wayne, Indiana, where we didn't bother to unhook Mae. After leaving Indianapolis northbound, we began to notice the terrible condition of of I-69. From Toledo, I-75 wasn't much better. In the Detroit area, roads were mostly awful; a large percentage of the city streets were in desperate need of repair. Many of the streetlamps are not functional due to their wires having been stolen. We had read of the decline of this once great city after the population's migration away from the rust belt, but we weren't quite prepared for the derelict that it has become. I suppose this is inevitable when a city's population shrinks from 1.8 million in 1950 to around 650,000 now and the city government doesn't shrink along with it. Detroit has been plagued with bloated worker rolls, bloated pension plans and corrupt leaders for decades, even having to declare bankruptcy in 2013. (Since I try not to discuss politics here, I will refrain from mentioning the political party that has been in charge all during this decline, but you can probably guess.)  Accelerating the decline is the ever-increasing Muslim population in this area, where the largest concentration exists in the U. S. Some of these areas look like a middle eastern slum neighborhood where many storefronts have signs written only in Arabic. Many other signs have both English and Arabic lettering: 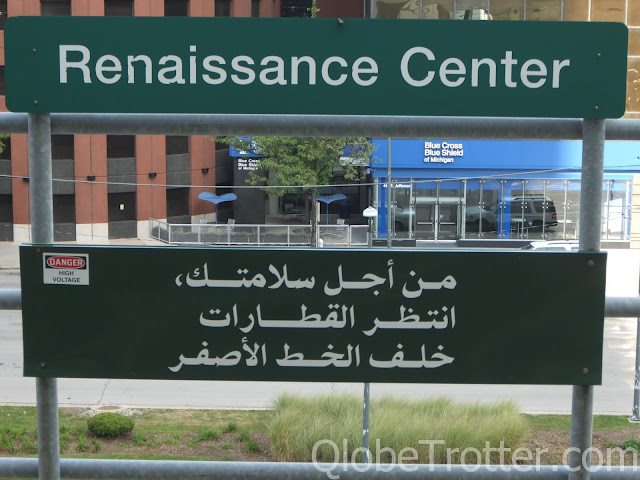 In certain schools there are girls-only proms with Islamic religious themes, and anything Christian--including any acknowledgement of Christmas--is prohibited. In a number of areas, almost all women wear a hijab.

So what brings us here to Beirut-on-Lake-Erie? Well, I'll tell you: The Henry Ford Museum complex, that's what. This has been a bucket-list item of mine for as long as I can remember, and I figured that we had better go while we can.

We picked out our RV park in Monroe, Michigan, which is about 25 miles from Detroit. That's about as close to that blighted area as we wanted to roost, and we found Monroe to be quite a pleasant community with lots of friendly residents. We set aside three days to visit the Henry Ford Museum, Greenfield Village and the Rouge River Assembly Plant, but this wasn't nearly enough time to see everything in this enormous complex. However, given our diminished level of stamina at this stage of our lives, it proved to be just about right, endurance-wise.

Fortunately, the several thousand acres that surround the vast Ford Motor Company empire have largely escaped the death throes of Detroit and some parts of Dearborn, its official address. We felt relatively safe in the Ford corporate area, and the museum complex is kept spotless in its bucolic setting of manicured grounds and trimmed trees. This is in almost jarring juxtaposition to nearby dilapidated city buildings and pot-holed roads, whose street corners are rife with beggars.

I realize this paints a somewhat bleak picture of Detroit, but it is what it is, and I see no reason to try to describe it differently from what we saw. Fortunately, the drive from Monroe to the museum was accomplished via a GPS route that, thankfully, was not unlike what we would see in any other major city. It was when we strayed from this route that we felt, shall we say, uncomfortable. There are, of course, more affluent areas, but we decided we didn't want to risk transiting the Beirut-like areas to reach them.

Having slogged through the negatives, for which I apologize, let's talk about the wonder that is "The Henry Ford," as it is known locally. Here is the original main entrance: 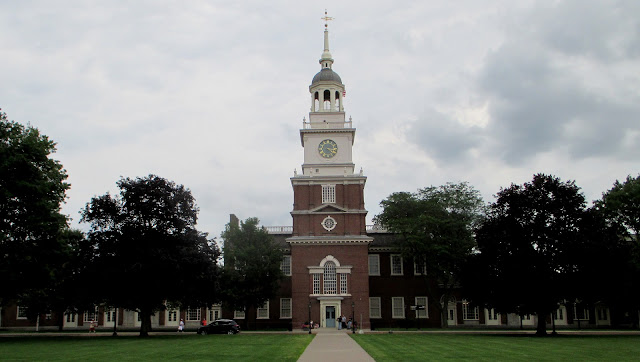 Outside of the Smithsonian, it would be difficult to find a more remarkable collection of the industrial and cultural icons of America. I'm not going to expend a lot of electronic ink gushing about this place because I have only so many keystrokes to make before the post's length approaches tedium for the reader. I think the best thing to do is to present a summary of our visit in three posts, the first of which is this one describing our impression of just the museum.

The heart of the complex is the welcome center, around which there appears to be ample parking at a cost of six dollars: 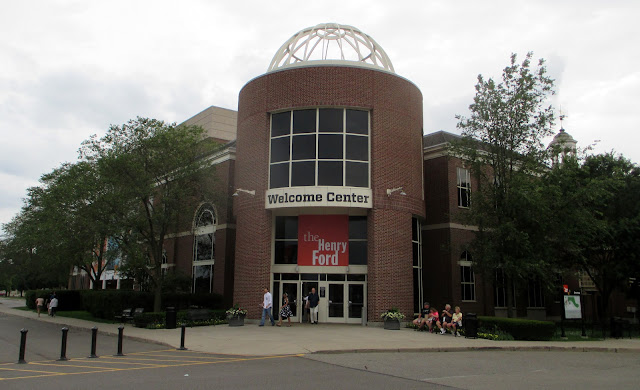 You enter to a welcome desk where a smiling person greeted us, answered our ill-informed questions and pointed to where we should proceed from there, which turned out to be the ticket counter. The transaction was handled quickly and smoothly and produced tickets good for one entrance to three of the four attractions on any sequence of days of our choosing. In other words, we could see the three things we wanted to see on any day we wished, but we could only see each one once. We chose to see the museum on the first day, Greenfield Village on the second and the Rouge River plant tour on the third day. The cost for this, at a senior rate, was $100 for both of us, including the six dollars for parking. The attraction that we chose to omit was a series of giant-screen movies on subjects such as robots, aircraft carriers and national parks. These would probably be interesting, but they didn't fit our schedule.

While I'm talking about our schedule, let me acquaint you with a mistake I made in planning this stop. Thinking that three days would be enough to see what we wanted to see turned out to be an error; I should have reserved a week, and I would have had the benefit of a rate reduction at Harbortown if I had. When it became clear that we needed more time to see everything, it was impossible to get because I hadn't factored into the equation that this was during a July fourth weekend, when every RVer in Michigan would be trying to find a camping spot at this park and every other one in the state. Our fate was sealed: We would have to depart as scheduled, and our destination would have to be somewhere outside Michigan. In my view, the number of parks in the lower part of the state is woefully inadequate. But we couldn't find any space in upper Michigan either and, since we don't do boondocking, we decided to retreat back into Indiana. Oh, well; we hear that the upper peninsula is better seen in the fall anyway, so that will have to be another trip.

Hmm, I seem to have digressed. Now let's get back to the Henry Ford:

Here are a few photos of the exhibits we saw, just to give you a very small sample of what is available for viewing. Planes, Trains and Automobiles were among thousands of things to see, plus an aluminum house that was to be mass-produced in an aircraft factory! Well that didn't fly, if you'll excuse the pun, but you'll just have to see the museum to find out the reason! 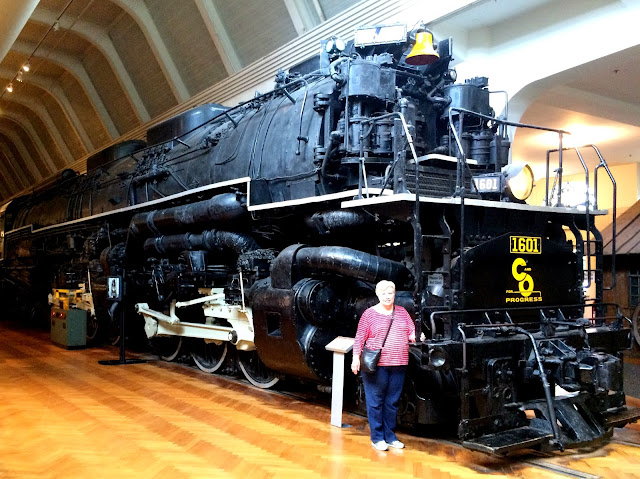 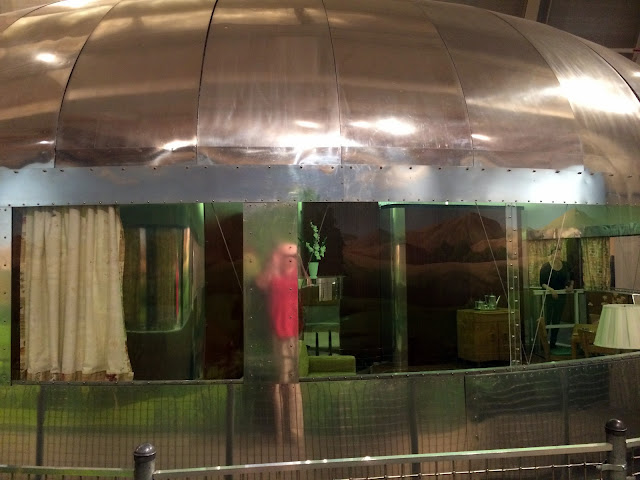 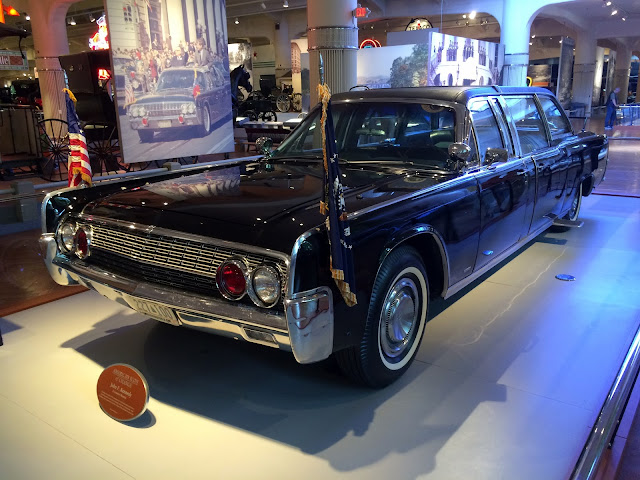 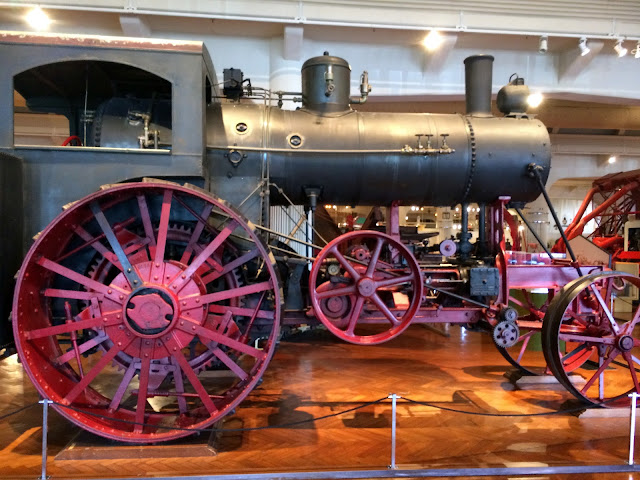 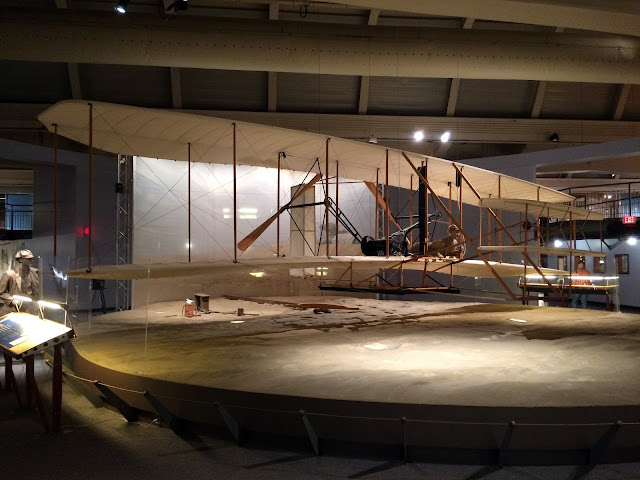 I won't even try to tell you how much more there is to see, but we thought it was entirely worth the cost and the hassle of getting here. Everything is very professionally presented and well documented, so if this isn't on your bucket list, perhaps it should be.