Hannibal: We are Treated to a Fine Tour

For those who follow Ed  and Marilyn's blog, The Happy Wanderers, their frequent mentions of their ancestral home near Hannibal, Missouri probably piqued your curiosity as it did ours. Having never before visited the historic river town that was the home of Samuel Clemens, better known as Mark Twain, and the setting for his classic novels, The Adventures of Tom Sawyer (1876) and The Adventures of Huckleberry Finn (1885).

Being as close by as Memphis, I thought there would be no better opportunity to catch these two friends in their home habitat than this one, so we pointed Phannie northbound on I-55 toward St. Louis and Hannibal. It also occurred to me that no one would be better suited to help us get acquainted with the area than they and, of course, this assumption turned out to be spot on.

Somehow Ed must have sensed that we were nearing Hannibal, as I got a call from him when we were about ten miles south of town. His purpose in doing so was to give me instructions for a better route to the campground where they are currently parked than the directions that are delivered impassively by the small woman inside my GPS. Once Ed gave me an overview of the route, my brain rather quickly ran out of RAM as he described the twists and turns he had in mind. Not wishing to make some off-road error with the leviathan that is Phannie and Mae hooked together, I asked Ed to stick with me on the phone while I negotiated his suggested route. This turned out to be a wise move, as I almost certainly would have made a wrong turn without his real-time guidance.

Ed greeted us warmly at the park entrance and led us to our site, which he and Marilyn had chosen as the best for our needs instead of the site originally chosen by the office. Upon spotting the site,we agreed that our friends had made the perfect choice. It's so nice to have friends waiting on us and smoothing the way. It's almost like having our own concierges!

Shortly afterward, Marilyn drove up to our rig with grandchildren Lauren and Colby, whose photos we had seen since their birth but never met in person. They are certainly cute and smart kids and are obviously adored by their grandparents, with whom they were to enjoy a pizza dinner that evening.

The next morning, Ed had scheduled a boat ride out on the lake with other fulltiming friends, Steve and Cathy. He couldn't help but smirk a bit when he informed us of the MORNING departure, as he is fully aware that we are anything but morning people. Nevertheless, we defied the odds and rolled out of our bed at the ridiculous hour of 8:00 a.m. I always take a lot of grief from others about our late-sleeping habit but frankly, we think they are the abnormal ones. Ed typically goes to bed early, then sleeps 10 hours or so and arises before dawn--something that might be fitting for ancient neanderthals but...oh wait, I think I've just figured this out.

Our mutual friend, Bob L., tells a revealing story on these two:  "Ed and Marilyn stayed up after sunset once and, seeing the setting sun, thought it was morning and were frightened because the sun was rising in the west."

We enjoyed the drive to Mark Twain Lake and the COE park that was really beautiful. After boarding Steve's and Cathy's very nice pontoon boat, we motored a short distance out in the lake until an engine problem developed, causing Steve to return to the dock. Although it was short-lived, we enjoyed the ride a lot along with the company of these four friends. We had lunch afterward, where I was able to harass Steve by mentioning that the "three-hour tour" in the theme song of the old Gilligan's Island TV show must have been Steve's inspiration for his "three-minute tour." He will never be able to live this down, much to the delight of his "friends." When you're around this bunch, having thick skin is a requirement; there is never an end to the good-natured harassment.


Steve and Cathy are volunteers at the beautiful visitor center at Mark Twain Lake. Thanks for showing us around, guys...we really enjoyed it.

After our tour, Ed and Marilyn took us to nearby Monroe City where they lived and Ed did much of the flying he recounts in his book, My Journey to the Clouds, available from Amazon. I was honored to have edited the book, and I definitely enjoyed our collaboration.

Next on our tour was the Garth Mansion, now a beautiful old bed and breakfast owned by friends of Ed and Marilyn. We enjoyed this a great deal, and I had the good fortune to play the 1869 Steinway piano that was lovingly restored by the mansion's owners. 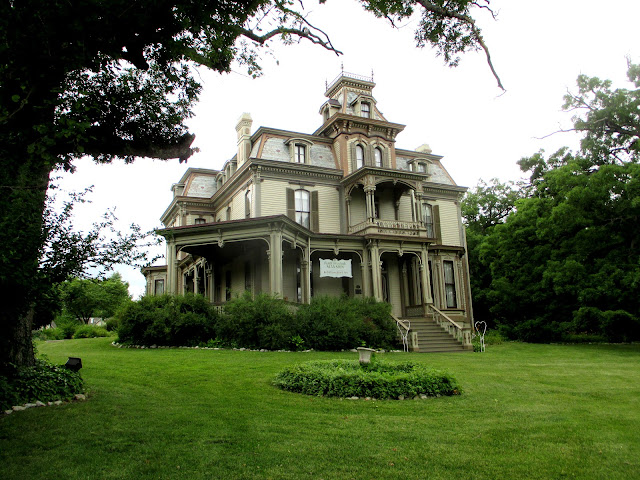 Reluctantly leaving the Garth mansion, we drove to Lovers Leap, a high promontory overlooking Hannibal at the Mississippi: 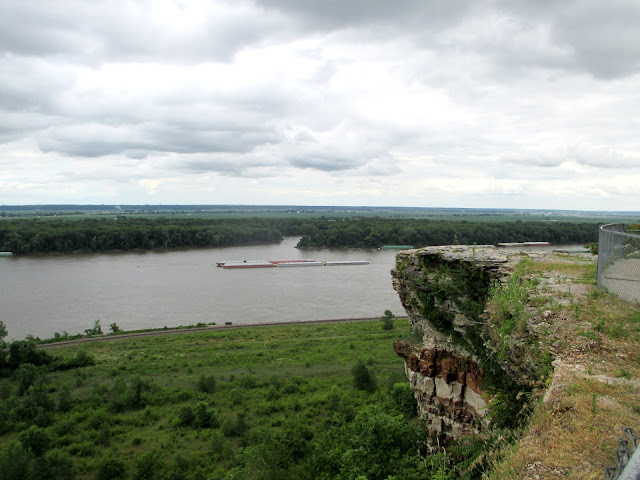 The photo above is the actual Lovers Leap rock overlooking the Mississippi, where, according to local legend, an Indian brave and an Indian princess, each from a warring tribe, jumped to their deaths because the young brave was forbidden to marry the one he loved.

All of this we experienced in only one day, thanks to our wonderful friends. Thank you, guys!  Our Hannibal adventure continues in the next post. Stay tuned!