A Visit to Freightliner in Gaffney

I've heard about the Freightliner Custom Coach Chassis Service facility in Gaffney, South Carolina ever since we've owned Phannie. Among the owners of motorhomes with Freightliner chassies, the Gaffney facility is generally reputed to be the gold standard in servicing their product--as it should be, I suppose. I had often thought we would go there someday when we were in the area; well, someday is today.

For those who don't know, Freightliner has a large chassis assembly plant in Gaffney; it also has a service center here devoted almost exclusively to motorhomes. But the service center is not located at the factory; for some reason, I didn't know that, and it caused quite a bit of confusion and some embarrassment on my part. I'll explain shortly.

I made the service appointment back in May and, at that time, I asked if we could also attend Camp Freightliner, an informational academy for owners of Freightliner coaches held for a fee at the service facility. I was told that, due to the popularity of the course, six months was not enough lead time to score a reservation. So, I suppose that wasn't in the cards for us.

The reason for making the service appointment for Phannie was a left front brake issue. Under rarely-needed heavy braking, the left front brake seemed to bind excessively and jerk the wheel backward. I figured this was indicative of something fairly serious and worthy of a look by the factory experts. As it turned out, the service advisor knew exactly what the problem was as soon as I began to describe it.

Phannie also needed an oil and filter change, something that has to be done in six-month intervals now instead of annually. This is because we have been traveling so much more since going full time. The coach still gets a comprehensive annual service, though, and that includes changes of three kinds of filters other than the oil filter and servicing the generator. Our next annual service visit will also include transmission service and coolant service that will be due and a changeout of both engine cooling system thermostats; that visit will be fairly costly, I'm afraid. This service will likely be done at Bay Diesel in Red Bay, Alabama. That is a yearly visit, where we take advantage of the many talented and trustworthy RV repair and servicing shops that have proliferated in the area. These cottage industries serve well the overflow of Tiffin motorhomes that the factory's massive service center cannot handle.

I also asked Freightliner here in Gaffney to do a full inspection of the chassis, a standardized two-hour-long colonoscopy of sorts, wherein they look at everything underneath the coach that could need repair or replacement. This inspection has a price tag of $200, and you get a written report afterward of the findings. Thankfully, Phannie passed with no discrepancies! Very relieved, I happily paid the $655 bill that covered the whole visit; I had figured it would be much more than that. And yes, if you infer that we don't scrimp on Phannie's upkeep, you would be right; but we think this is the reason that she has given us such good and dependable service over the years.

Gaffney is a relatively small town of about 15,000 between Spartanburg and Charlotte, NC.  Besides having Freightliner as the major employer. Gaffney calls itself the peach capital of South Carolina. In recognition of this, they have erected a water tower that looks remarkably like a peach: 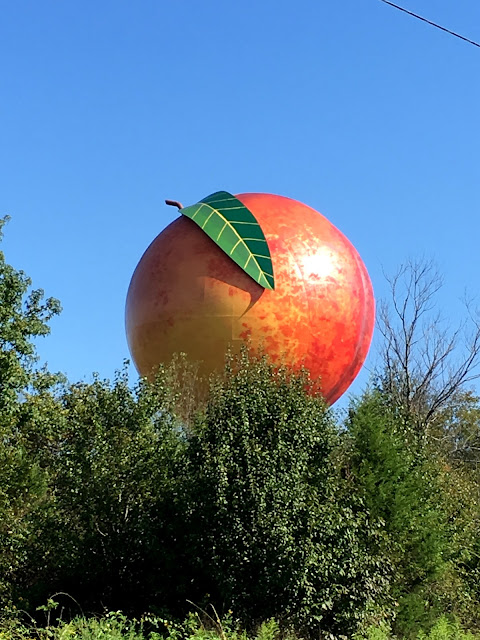 The Freightliner factory is a very large facility located south of town on Hyatt Avenue. I just assumed the service center would be here, too:


Wrong!  Having arrived late on a Sunday afternoon, I pulled Phannie and Mae around to the rear of the plant where I encountered a guardhouse from which a sleepy young guard finally emerged. I explained that I was looking for the Freightliner service center, and he appeared genuinely dumbfounded--as if I had just landed in a flying saucer.

The parking lot he was guarding contained hundreds of freshly-minted Freightliner RV chassies like these: 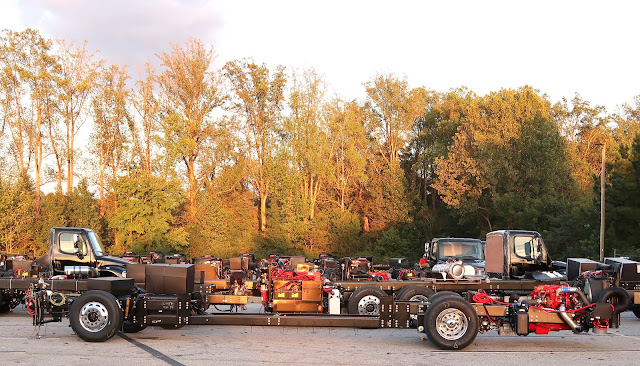 The chassis above appears to be about 40 feet in length and contains a Cummins diesel engine in the rear. It can be driven as it is, and these can be seen scurrying here and there as each one leaves the assembly line with a driver. This chassis will be delivered to some RV manufacturer and become a beautiful new motorhome before long.

The guard finally collected his thoughts enough to communicate, and he informed me that he was new to his job and, basically, knew almost nothing except how to raise and lower the gate arm at his post. I can confirm that he was, in fact, skilled at this, having witnessed his performing the procedure several times while we were there.

When it began to dawn on the guard that we were not going away, he called someone on the phone and then informed me that the service center was about two miles farther north via Interstate 85. Armed with this information, I began to assess the real estate in front of me to judge whether I could turn bus and toad (RV slang for "towed" vehicle) around while hooked together. I quickly determined that it looked very iffy; so, fearing that taking such a chance in this crowded lot could have some very expensive consequences, I took a wiser course. I unhooked Mae, backed Phannie up and turned around, and Sandy followed me in the car to the new destination. (For those who don't know, you are never supposed to back up a motorhome with a towed vehicle attached behind.)

This little episode really had no adverse consequences other than a little embarrassment on my part, and it could easily have been avoided if I had been a little more diligent in my trip planning. I kicked myself for assuming the service facility is located at the factory; making assumptions is something I have been trained to avoid in 50 years of safe flying as a pilot, and I suppose that was the embarrassing part. 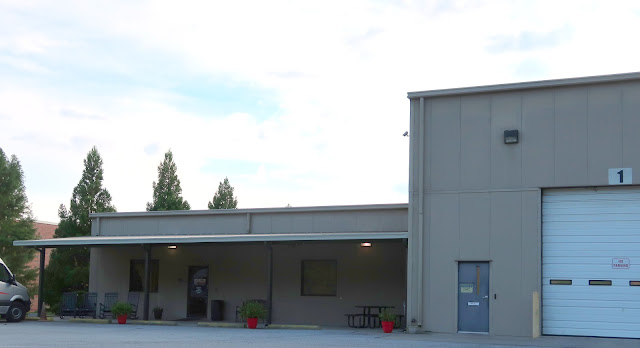 The service bays will each handle two coaches parked in tandem; the other three doors are on the opposite side of the building. 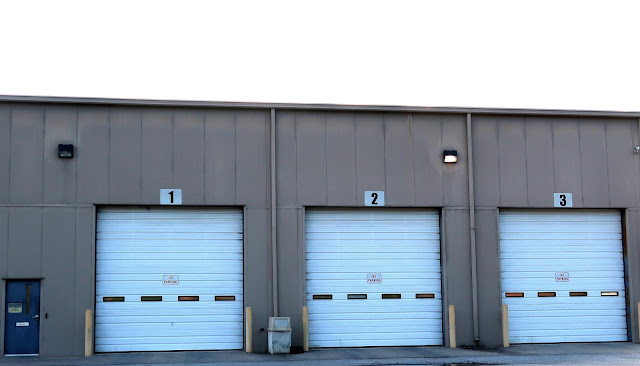 Freightliner provides parking spaces for 20 coaches in the rear of their facility, each space having a 50-amp electric hookup. A water/dump station is also provided nearby. When we arrived there, all the spaces were occupied except for two or three; this place stays busy! You can see Phannie, in her gray glory, lounging in her space on the right side of the photo below.

Next door is a business training center where I suppose Camp Freightliner classes are held:

My impression of this place is a good one. The employees we encountered were very friendly, and John, our service tech, listened very carefully to my questions and answered them fully, working quickly and skillfully to complete his tasks. By early afternoon, Phannie was back in her parking spot, where we would be spending another night before departing for Charleston the next day.

So, with this successful visit, we bid goodbye to Gaffney, and we'll post again from Charleston.