Since we were already in South Carolina, I thought, why not continue on to Charleston, one of the few significant and historical cities we have never visited? I'm not sure why we hadn't gone there, but I suppose it is because the Civil War period has not held as much interest for me as that of World War II, in which my father and several uncles served. As I get older, I realize that, because I have several ancestors who were Confederate soldiers, including one who was an officer, I would like to become more familiar with that period. That sounds like a perfect opportunity for a fulltimer.

We thought the best way to take in the sights of Charleston was via guided tours, so we booked a boat tour that took us all around the bay, pointing out the Civil War forts--Johnson, Sumter and Moultrie--as well as the carrier Yorktown, the Ravenel bridge and, of course, the environs of the historic buildings along the long pier behind which lies the old city. Perhaps owing to the narrow streets--some of which were cobblestone--Charleston reminded us of some old European cities we've visited.

Luckily, most of the old buildings that were heavily damaged during the Civil War still stand, having been restored rather than replaced due to a lack of capital after the Confederacy surrendered.

The city is very old, having been settled in 1670 by the English under the auspices of King Charles II--hence the city's name. It has a long and incredibly rich and garrulous history, having been subjected to attacks by Indians, pirates, the French and the Spanish, not to mention Union forces during the Civil War.

Slaves were introduced into Charleston by its early settlers in the mid-1600s, and the practice continued in public auctions until just before the Civil War, when the public slave auctions were outlawed in the city, perhaps due to the beginning of an awakening among the citizenry as to the barbarity of it. The auctions didn't end, however; they merely moved indoors out of the public eye. Here is a photo of the last known private indoor slave trade mart, which is now a museum. Notice the cobblestone street: 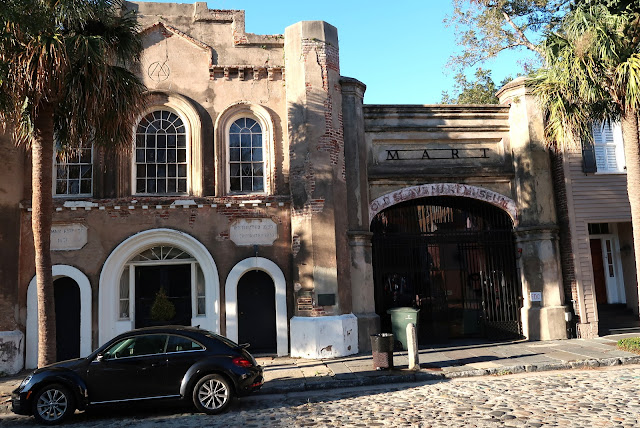 There are other aspects of the slave trade that we learned. For example, some native Indians were also rounded up and sold as slaves. Also, a large number of slaves were captured in the South and sold to buyers from foreign countries. It was explained that the going rate for a healthy young slave was about $12,000 in today's currency.

There are no tall buildings in Charleston, as it was decreed long ago that no building near the bayfront could be constructed taller than the tallest church steeple, which happens to be that of St. Matthew's Lutheran Church (below). Accordingly, the city looks much like it did two centuries ago, when the harbor would have been full of tall-masted sailing ships transporting the products that made Charleston wealthy. 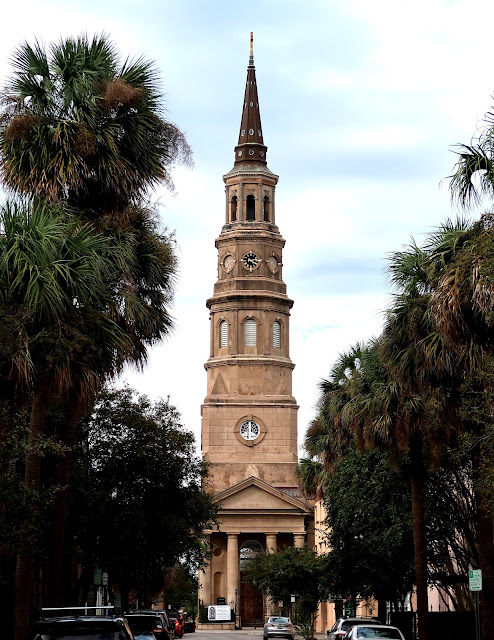 Here are some photos of our harbor tour boat and some of the sights we saw, including the really handsome Revenal Bridge that spans Charleston Harbor and the decommissioned aircraft carrier Yorktown: 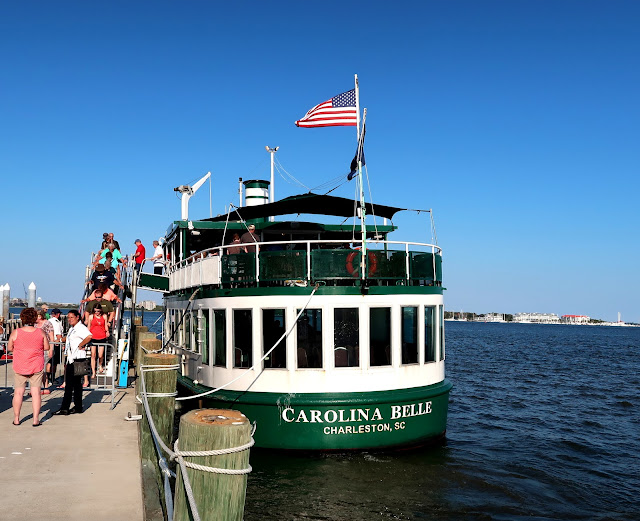 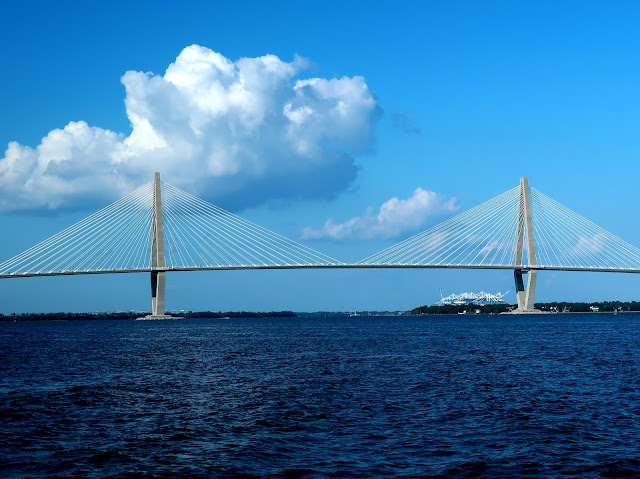 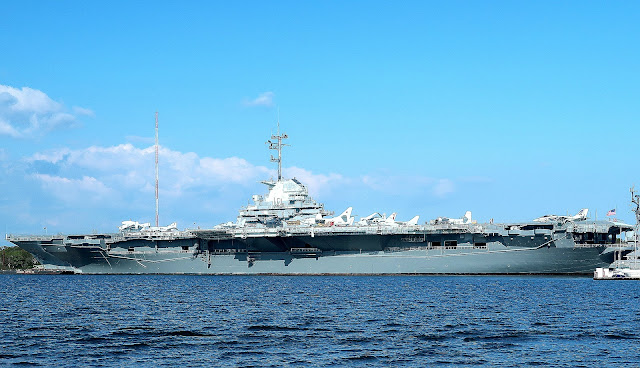 Here's a view of the city from Fort Sumter; this would be a sailor's first view upon entering the harbor: 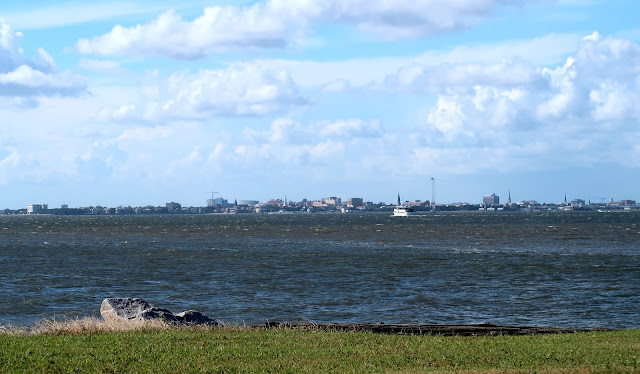 Having only a hazy memory of the Civil War history that I was taught back when history was an education requirement, I was aware of the fact that Charleston's Fort Sumter was the site of the first shot of the Civil War; but that's about all I remembered. What I didn't know was that the first cannon shot actually was fired from nearby Fort Johnson by the Confederates but aimed toward Fort Sumter, which was manned at the time by a garrison of Union soldiers and who returned fire, to no avail. This was the signal for the Confederate batteries in the harbor to open fire. It was April 12, 1861. One day later, after a 34-hour bombardment, the Union occupants of the fort surrendered.

We also didn't fully realize that Fort Sumter was on an island located a half-hour boat ride from the city at the mouth of Charleston harbor. We also didn't realize that the fort was almost destroyed by Union cannon fire--as was much of the city--during the 567-day siege that followed Union reinforcements' arrival after the original garrison surrendered to Confederate forces on April 13. What little is left of the original fort has been painstakingly uncovered from the rubble and lovingly restored.  Here is a prewar rendering of the fort: 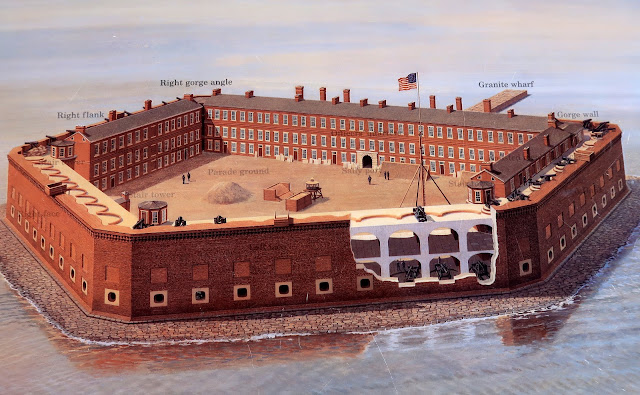 As you can see from a current photo below, only a portion of the bottom floor remains. The top two floors were reduced to rubble by the  Union barrage: 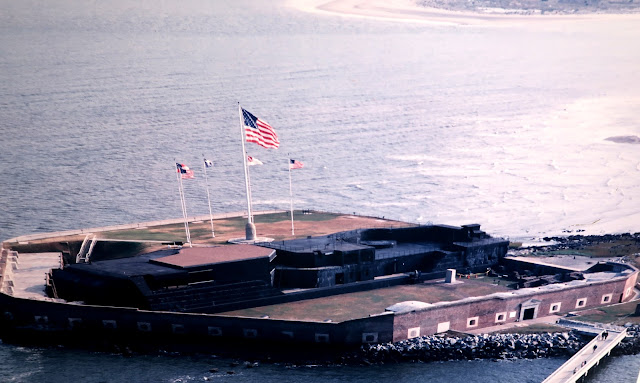 Here's a view inside the fort looking northwest toward Charleston and our tour boat. There were originally two more stories above the alcoves seen below which were cannon emplacements: 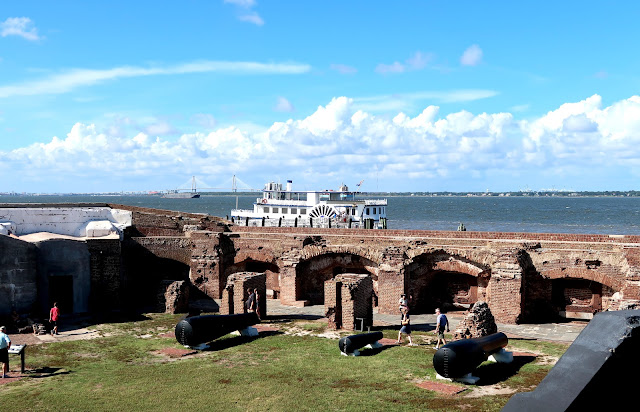 Here's a closer look at one of the emplacements showing the damage of the brutal Union barrage: 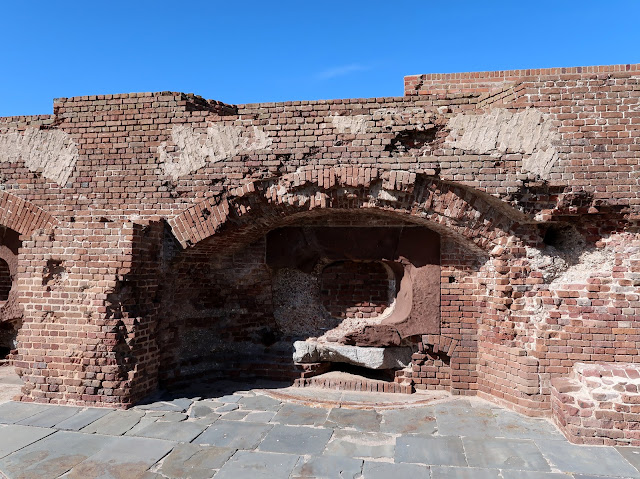 The next photo shows a Union shell still lodged in the masonry: 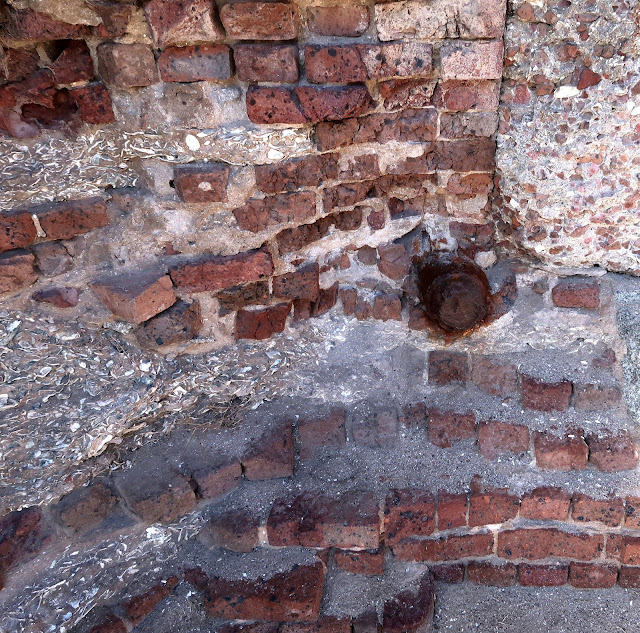 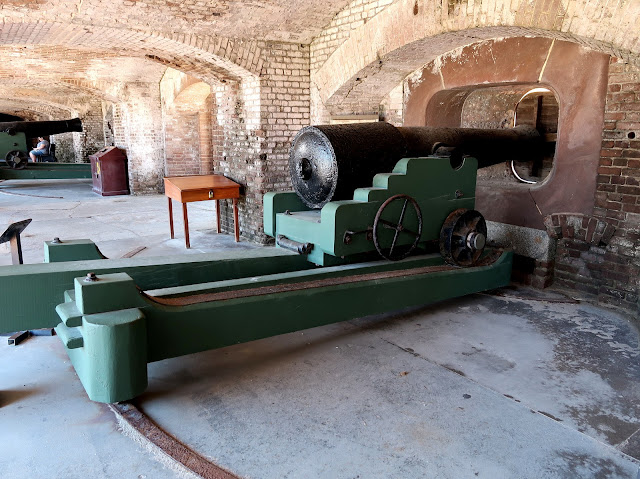 During the Union barrage of Fort Sumter, the ammunition magazine in the fort exploded, forcing outward this ten-foot-thick entrance wall, killing 13 men. The wall's tilt is discernible by comparing it to the striations on the perpendicular cement wall on the right: 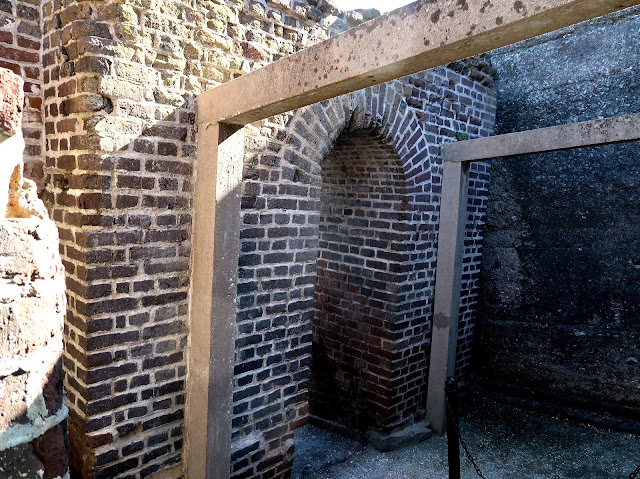 For some reason, Sandy seemed way too gleeful in seeing me posed like this: 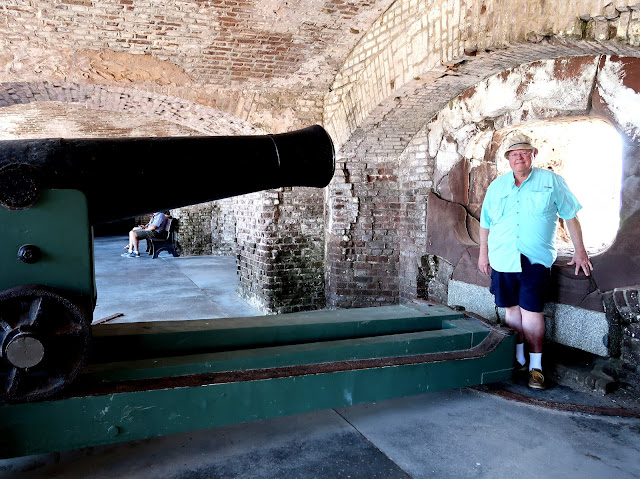 We also took a home tour, one of many that are available to see in the area. We were especially interested in the Aiken-Rhett mansion, in which a governor of South Carolina lived.  It was somewhat unique in that the house has not been restored but preserved. This means that the house and its furnishings were left, to the extent possible,  just as they existed 200 years ago. Here are a couple of photos--one of the veranda and one of the art gallery: 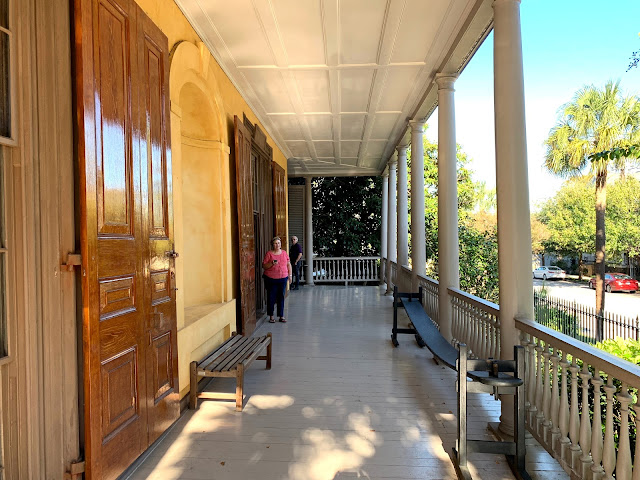 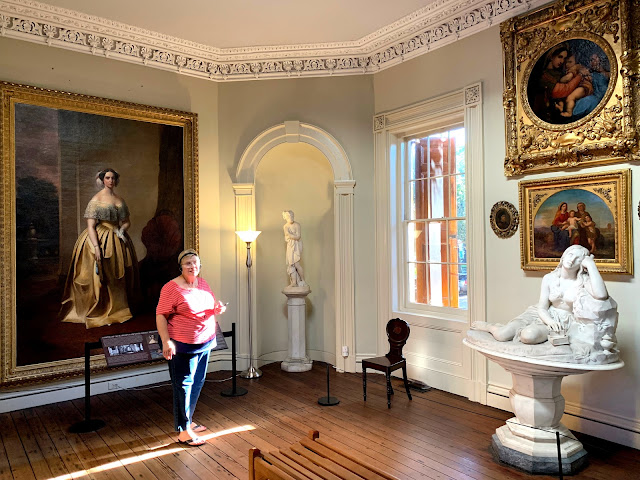 Of course, no visit to Charleston would be complete without sampling some of its many excellent restaurants.  One of our favorites was 167 Raw, a tiny fresh seafood spot on Bay Street. We had some of the best ceviche ever and this killer lobster roll, which we shared: 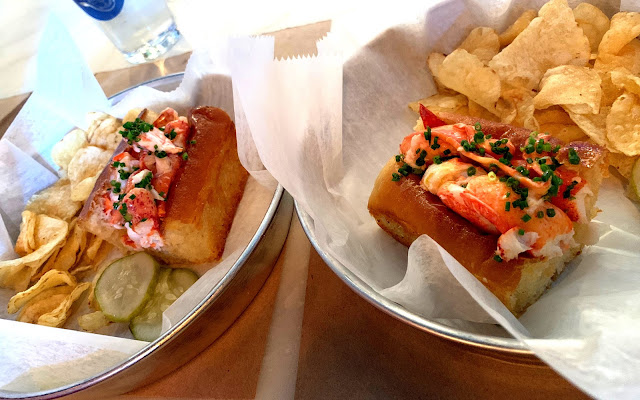 I hadn't intended for this post to be so long, but Charleston just had so much to offer to visitors--and we didn't really scratch the surface. I'm glad we decided to make the trip.