Settled In 'Til The Storm Passes By

Well, we didn't see this one coming. I am reminded of the old Yiddish proverb, "We make plans, God laughs." And so it was; we had made extensive plans for the next six months or so--perhaps more than at any other time during our travels. We have made appointments and reservations months in advance...and now this.

It was a conversation with my old hometown friend John that gave me the idea to change our route back to Texas and detour through Prescott, Arizona. We thought it would have warmed up by late March, and there are so many beautiful places nearby. However, we got here just as the world was shutting down, so here we'll stay, I suppose, until the storm passes by.

There are worse places to be. We secured a space at this very nice 55+ park in nearby Prescott Valley. It is a combination of an RV park and modular home neighborhoods--a very quiet place with no children around to spread germs to us older folks: 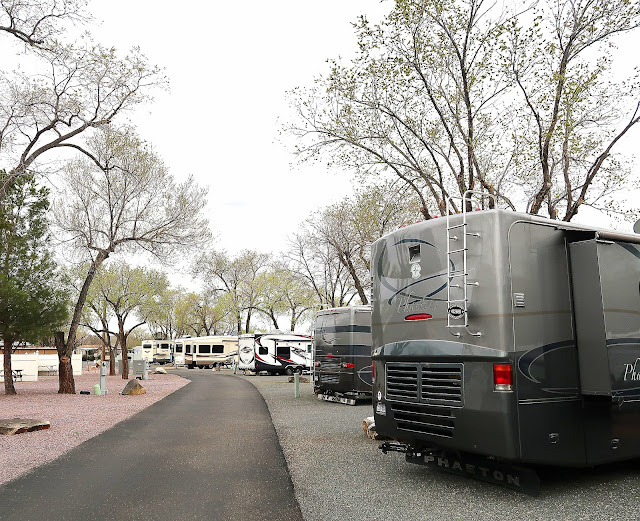 Yavapai county had the added benefit of having no reported cases of the Coronavirus, but that didn't keep the inhabitants and staff of the park almost totally out of sight. Only occasionally would we see another person outside or at the office, which is closed to all except staff. As of this writing, we haven't met a single person here, even at check-in, which was done over the phone when we arrived, including the payment of our rental fee. It was a surreal situation, revealing the paralyzing fear of so many in perhaps one of the safest places in Arizona, if not the nation. There's no virus here to catch, folks, at least for now. Good grief!

This "social-distancing" taken to the extreme did not deter us from going into town almost daily to take care of errands and get groceries. Our on-board provisions were not very robust, given our usual daily entertainment of trying new restaurants wherever we are. We found the grocery stores to be very busy, and success in finding things we wanted usually required visits to more than one store. There were a number of empty shelves in all the stores, but we finally found almost everything we needed. We gave up on finding toilet paper, paper towels and hand sanitizers, but we really didn't need them, as we had luckily stocked up on these recently.

We were able to try one Thai restaurant before indoor dining was shut down, and it was perhaps the best Thai food we have ever eaten. I was so surprised at the good food that I forgot the name of the restaurant, but we will certainly patronize it again and put it on our list. I hope they are still in business when this virus hysteria is over.

After a down day for bad weather, we awakened to a rather substantial snowfall! How ironic this was, as our whole reason for going to Arizona and southern California for the winter was to get away from cold weather. Following is a photo of the sight we saw driving into town that day:

This should be expected, of course, since Prescott is about the same elevation as Denver, and the high country is more subject to snowfall. Even so, Sandy and I looked at each other and marveled at how our plans and circumstances had changed so quickly and unexpectedly in the space of perhaps three days. Never in our wildest dreams would we have imagined going to Arizona for the winter and finding ourselves in a snowstorm.

Speaking of Sandy, the orthotics have not helped her foot at all, so we've made an appointment with a local podiatrist to get a third opinion. We now have no idea when we will be able to return to Houston and the medical teams whom we trust.

On the fourth day here, the weather improved greatly, so we went on a short sightseeing venture. This is a very picturesque town with an old west flavor and lots of granite rocks strewn around: 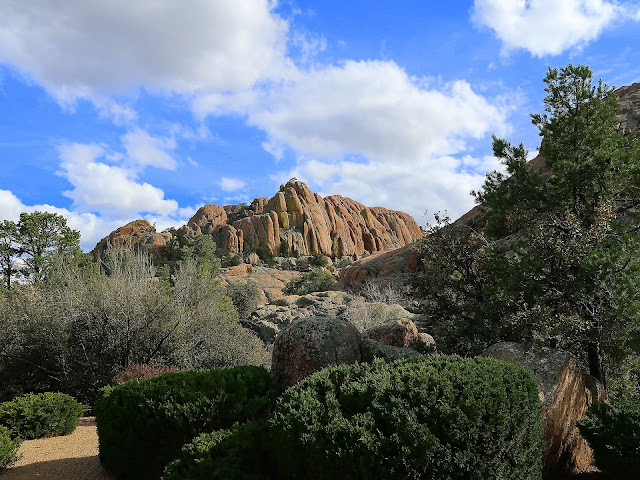 We didn't have very good light on this day for photos, so we'll be including more in future posts, since it looks like we'll be here for a while.

The virus plague, even though it hasn't visited Prescott yet, has caused all the restaurants to close their dining rooms out of fear, offering takeout food only. this puts a real crimp in our restaurant foodie habit, as we really don't care much for takeout grub. As a result, we're having to get back into the habit of (gasp) cooking again. After a light lunch of a couple of hot dogs, I fixed a respectable hearty vegetable soup, and Sandy cooked a skillet of her famous cornbread for dinner.

Oh my, this isn't going to be so bad, after all! 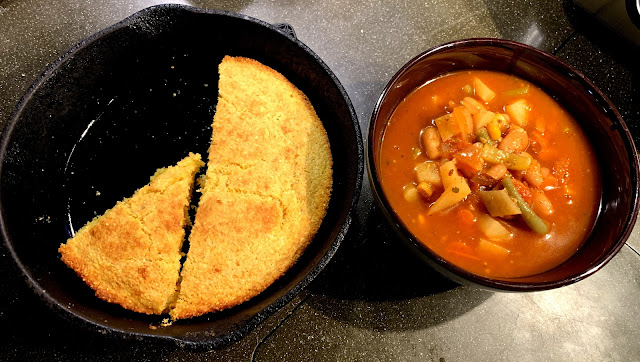