Thankful to be Here

Things are very quiet here in the rural area where we're parked between the small towns of Prescott Valley and Dewey, Arizona.

There's been a small uptick to 15 known virus cases here in Yavapai County, with about 1,100 in the entire state of Arizona and, unfortunately, 20 deaths, statewide. Thankfully, the risk is low around here, but we still try to take the prescribed precautions. We've washed our hands as never before, and we're very mindful of what we touch outside Phannie, making sure to sanitize afterward. The thing we're having difficulty learning is to avoid touching our faces with our hands. Never before had we noticed how many times we touch our faces every day and, even as I write this, I find that I mindlessly reach up to adjust my glasses or scratch an itch or something on my face. It's maddening to try and break that habit.

All of the social gathering places in the park are closed, and we rarely see another guest outdoors. Our daily routines are becoming fairly predictable:  We sleep late (nothing new about that), then Sandy gets up to start her iced tea IV drip (if you know her, you'll understand). Shortly afterward, I stumble into the kitchen and figure out what I'll fix for brunch.  We eat only two meals a day--brunch and dinner.  For years, I have done the meal cooking and Sandy does the baking. It works perfectly, because I enjoy cooking entrees but not baking, and she enjoys baking (at which she's very good) but not cooking entrees.  However, she doesn't get to use her baking talents much these days, because we have tried very hard to limit carbs in the last few years. That's helped me lose 53 pounds since retiring, but we've sorta plateaued now that our outside activities have been curtailed--mostly by the social vacuum and Sandy's foot problems.

She's seen yet a third podiatrist in nearby Prescott Valley; he is changing the orthotics she received from the previous Tucson doctor (who made things worse at a cost of $600) and advised that the orthotics he would be using would be much more appropriate for her condition (we'll see). He also said that surgery may be the last resort, but warned her that it may have only a 50-50 chance of success, in his opinion, because she has already had bunion surgery in the past. We'll see what our doctors in Houston have to say--if we ever get back there.  She mainly just toughs it out, walking with a temporary orthotic from the new doctor. It seems to help, so we're encouraged that he may know what he's doing.  She doesn't complain, however--unlike me, who would do much more whining if I were the one with her problem.

In the afternoons, we generally watch television or spend time on the computer conducting our personal business or keeping up with family and friends.  Thank God for modern technology! We have kept Phannie updated with the latest in satellite and unlimited wi-fi streaming capability on all the major cellular networks, so we are completely independent of any park resources for TV and wi-fi, which is a good thing, as the wi-fi in most parks is terrible.

Dinners are usually light and simple. We have no problem with leftovers, which we often have on hand, as it's not all that easy to cook for just two people.  This has been a huge change for us, as we have had a habit of eating out for the evening meal, usually trying new restaurants that we hear or read about as being good ones.  This has come to a crashing halt with the closing of inside dining, as we almost never do takeout.  We don't like eating in the car, and takeout food has usually deteriorated in some way in the time it takes to get back to Phannie.  Today's menu was a scrambled egg and sausage sandwich for brunch, and dinner tonight will be leftover beef stew and some sauteed fresh vegetables. I would like to say there would be a piece of one of Sandy's wonderful pies, but that would be like giving drugs to a recovering addict--not a good idea.

Thanks to technology, we're able to keep up with the kids, relatives and friends--sometimes by Facetime, and that helps a lot. It has been hard not to be around the grandsons as they grow like weeds. Here's their latest photo:


On some days, we drive around the local area, so we'll know our temporary home better. There are some very unusual and picturesque granite rock outcrops around Prescott that we find fascinating. You can barely see Sandy standing in the shadows at the base of some of these rocks: 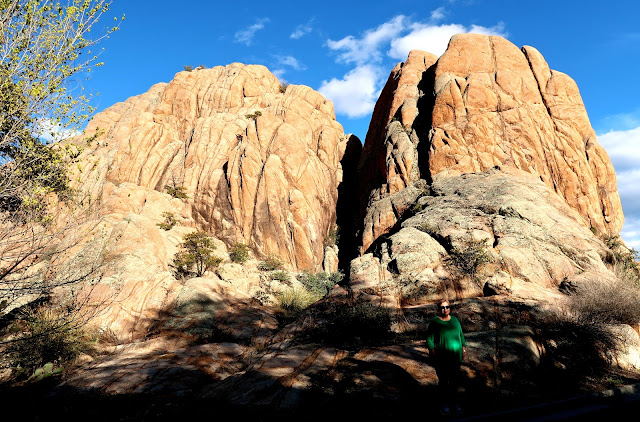 Here's another photo of the rocks along Highway 89 northbound from Prescott. The mountains in the far distance are 7-8000 feet, near Williams, Arizona: 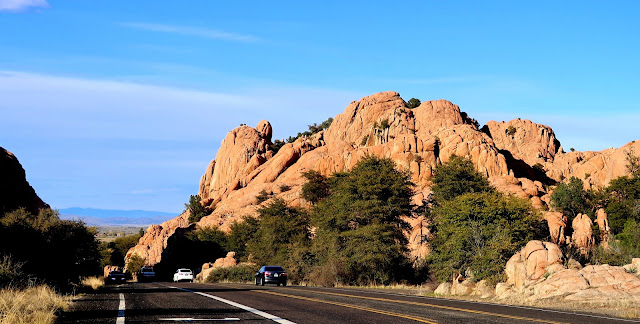 Beautiful Watson Lake, just north of Prescott, is nestled in the rocky area: 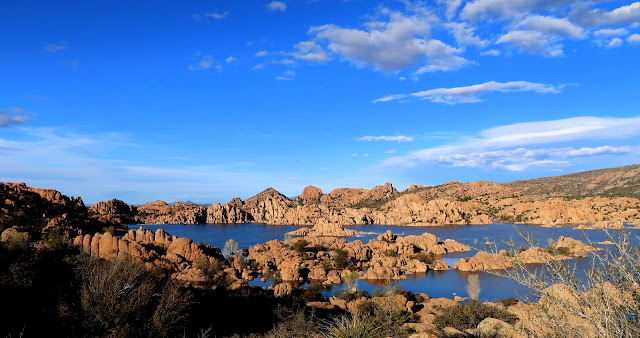 According to geological sources, this collection of granite rocks is known as the "Dells" and consist of very old granite that has been exposed and weathered over time into spheroid shapes. The rocks are unusually high in uranium levels, necessitating periodic radon testing of houses built nearby. All we know is that they're very scenic, and we enjoy driving through the area.

We'll try to get some photos of the town of Prescott the next time we take an excursion. Life, for us, is moving very slowly now, in this unusual time for our country; it's almost as though everything is happening in slow motion. For us, a day's activity may consist of just one chore or maybe a trip to the grocery or drug store. We feel especially bad for those who are sick and those who have lost their jobs, and we pray things will return to normal sooner rather than later.  Until then, we'll keep you updated from time to time.