Tucson! We Have Visitors, Phannie Gets a Well-Woman Check, and Sandy Gets the Boot!

Well, there's a lot to cover in this post, so it would be a good idea to freshen your coffee. And (spoiler alert) Sandy's not really going anywhere, and you'll soon see why.

A couple of days after we arrived here in Tucson (we were then at Voyager RV Park), Doug and Michelle stopped for an overnight just to see us! Now, this was special and doesn't happen every day so, to show our appreciation, we took them to a restaurant that would have to do an Olympic-style pole vault to reach mediocre! We were aghast!

Doug was very tactful in his Facebook comment about it, but my response to his comment there was less so, if you happen to have read it. In our defense, we hadn't eaten there before, either, and decided to go based on a recommendation; however, some very bad luck or a change of ownership must have befallen the place in the meantime. That's about all I'll say about it, but our companions get gold stars for politeness during it all. Now that I think about it, they were captives, riding with us in Mae, so that may have been a partial motivation for their tolerance and good humor. (No, not really; they're just good folks with good manners. But that probably won't last; it won't be long until they'll become as sarcastic and abusive as the rest of the friends we love.)

I'm getting ahead of myself here. Before we had the dinner disaster, we drove around Tucson a bit, which was very much the blind leading the blind, as we had barely gotten to town ourselves. We first had the idea of going to Old Tucson, which we missed by, oh, ten miles or so. (Thanks, Siri--way to impress our new friends.) Then we spotted some cars driving up Sentinel Mountain on the west side of town. We didn't know the mountain's name, so we didn't have any GPS help, relying instead on meandering around the base of the mountain until we spotted what looked like the road to the top. Luckily, it was the correct road, and it led us up to a large white letter "A" near the top that had been fashioned from rock and concrete. Since the University of Arizona is here, that makes sense, and the view of Tucson from that vantage point was beautiful: 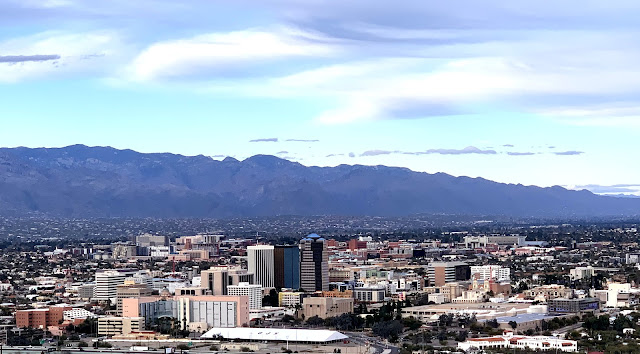 Yes, just go ahead and make fun of my poor travel planning; I never claimed to be fussy about that like others we know (yes, you know who you are). We usually get ideas from bloggers or friends and just sort of add these to a fluid mental list of places we'd like to visit, relying on Google's Maps and Earth and the miracle of GPS to get us there when we feel the urge. Well, when Doug and Michelle showed up, we hadn't had time to do much homework like this, and since we didn't find Old Tucson, my finding the road up Sentinel Mountain was like what Christopher Columbus must have felt back in 1492! At least it was something we could claim as being a bit entertaining for our guests.

The dinner afterward was so appalling that I forgot to take a photo of Doug and Michelle; but you can look back in the Quartzsite post and see them. We sheepishly said our goodbyes afterward, and, true to their word, they vanished the next morning. We hope we hear from them again. (Sigh)

I've been mentioning in previous posts that Sandy has been having foot problems, for which she has seen podiatrists in Mesa and here in Tucson. Since the problem is worsening, the Tucson doctor ordered an x-ray, and we will get the results in a couple of days, meanwhile, she is having to wear an orthopedic boot to help until the diagnosis is known. You can tell from this photo that she is not her usual bubbly self, and this is worrisome, to say the least: 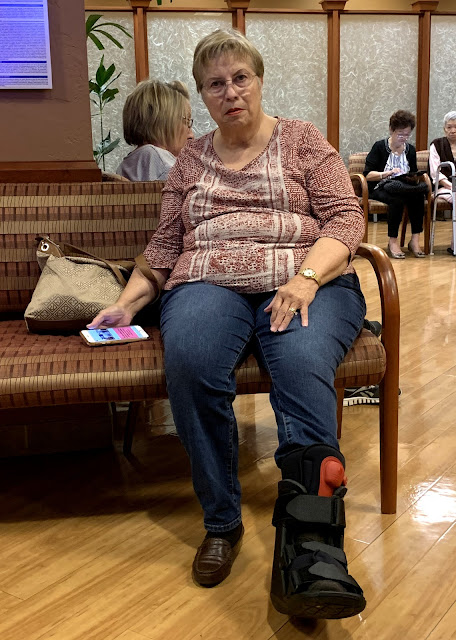 We'll keep you posted on this, which we're guessing might be due to a bone spur. We have been very fortunate over the past four years of fulltiming to suffer few illnesses (our falling injuries in Fredericksburg was the most severe medical problem, but that was not due to illness). Fortunately, we have great health insurance, and we are not prone to delaying treatment when we need it. Travel beyond Tucson is probably on hold until this problem is resolved.

I also had Phannie's 100,000-mile check done at Empire Caterpillar here in Tucson, an appointment made months ago. 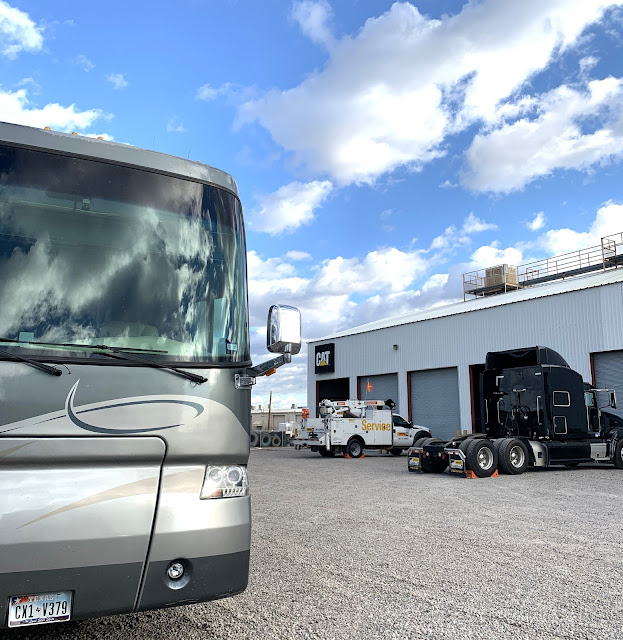 I was unaware then, of course, that Sandy would have foot problems and have to be on her feet more than usual as we moved Phannie from RV park to the shop and back. She didn't complain, although I know the extra activity caused her a good deal of discomfort.

The maintenance schedule on Phannie's engine calls for a valve adjustment when reaching 100K miles, so that was the main purpose for the visit. I also requested that both engine thermostats and both fuel filters be changed. I discovered that one of the fuel filters was not changed as instructed during an oil change at a diesel shop that I used in Indiana, which is why I always try to get service done at a familiar, trusted shop or at Caterpillar or Freightliner. I had the thermostats changed because, while they are not frequent failure items, they do fail, and changing them at 100K--while we were already at Caterpillar anyway--may prevent our having a breakdown in the middle of nowhere, a place we often find ourselves.

The Caterpillar engine is known to be simple and durable, having little of the EPA paraphernalia required nowadays and no need for DEF, but it is very sensitive to having clean oil and clean fuel, which is the reason that I have oil and filters changed more frequently than factory recommendations. Phannie has repaid us with great dependability over the years. Trade her off? Wouldn't think of it; that engine should be good for 500,000 miles, which will, for sure, outlast us!  We've got some interior refurbishment and painting scheduled for June in Red Bay, so she should be good for quite a while after she gets 'prettied up.'

We'll chat again when we find out what's going on with Sandy's foot. In the meantime, I should be safe from getting kicked for a while, you think?