As you can see, we are no longer in Salt Lake City, or even in Utah, or even in Wyoming. We're in Idaho! And yet, this post is about the Tetons! That's why it's been so hard to get caught up! We need to slow down and take a break, and that's kinda what we're doing.

But where are you headed, you ask? Well, let's let that be a surprise. (We may even be surprised ourselves! All we know is that it's still too hot in Texas, and the virus is still a problem there.)

Right now, we're in a very nice RV park here in Mountain Home--so nice, in fact, that it is found in the "Best of the Best" RV Park Listings. The link is on the right side over there. 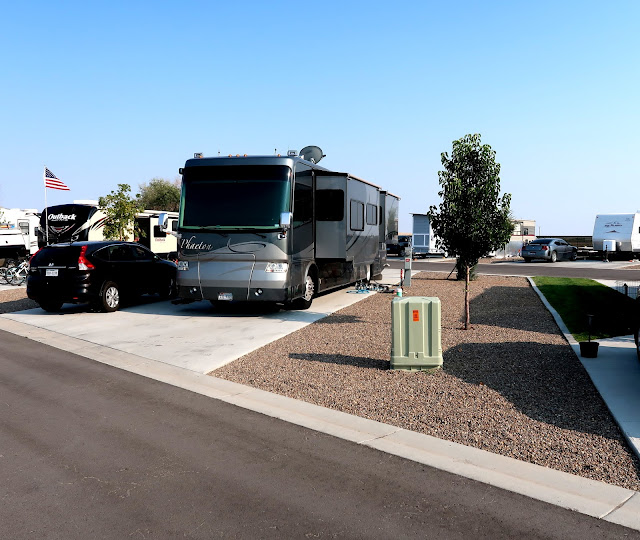 Now, this will be a relatively short post...okay, please, your applause is a little annoying!

The reason for this bit of abbreviation is that the Tetons are a relatively short mountain range, running from Yellowstone National Park to Jackson, Wyoming. However, it is one of the most stunning because of its sharp rise from the Jackson Hole valley with no foothills preceding the sudden uplift of the mountains, as is the case almost everywhere else.

According to geologists, this is due to a fault 40 miles long north of Jackson, under which the Jackson Hole Valley is slowly moving downward, lifting the Tetons higher and higher. It is one of the youngest mountain ranges, said to be less than 10 million years old. That's why the peaks are so jagged; there has been insufficient time for erosion to have had a smoothing effect on the peaks. Because the uplifting activity is still going on, the Tetons are still growing in height, albeit slowly, of course:

As you near the south exit from Yellowstone, the photo below is the first view of the Tetons you'll see:

Unfortunately, smoke from forest fires that seem inevitable every August had drifted into Wyoming and Utah, so this photo isn't as impressive as it would be on a clear day. Next is a photo I really like, taken from a bit farther down the road and showing the shoreline of Lake Jackson: 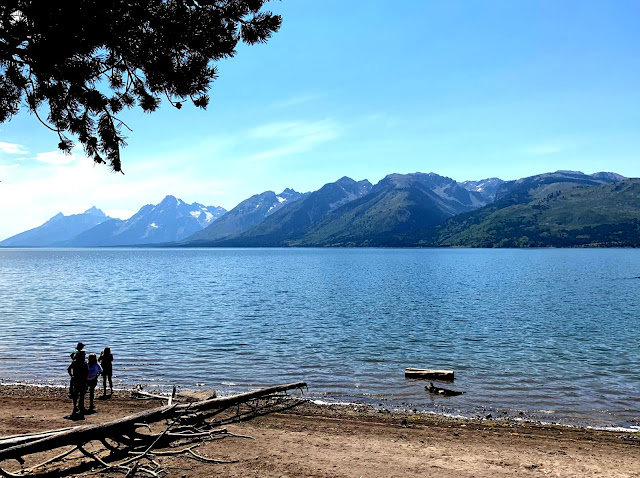 However, I think the photo below is my favorite of the Teton lake views.  Remember you can click on the photos to enlarge them. 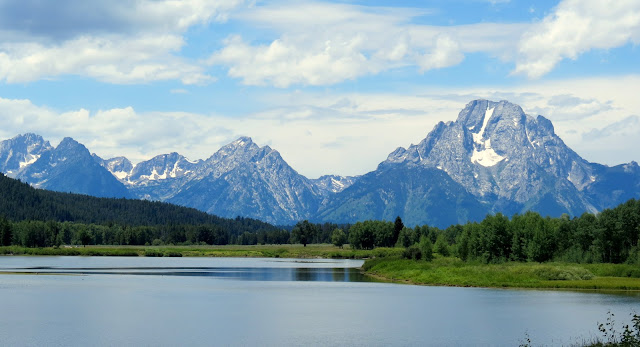 The photo above was taken from the Jackson, Wyoming end of the range, looking in the opposite direction from the first one in this group. 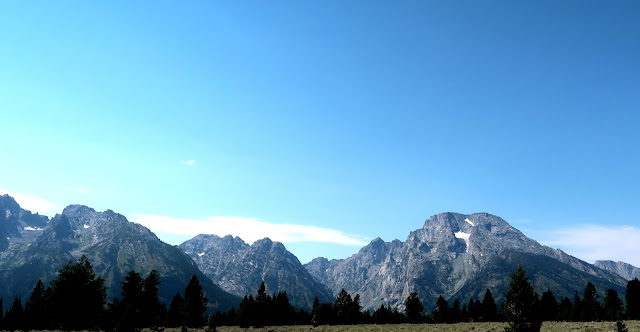 The photo above shows the unusual near-absence of foothills before the mountains spring up, but the next photo is the one I really wanted. It is probably the most photographed barn in the world, situated in a little Mormon community near the mountain range. We weren't able to find it until this trip, and I'm very happy to have it in this blog.
To me, it's interesting not only for the contrast of the slowly dilapidating barn with the Tetons as its backdrop, but the contrast of those things made by human hands that inevitably deteriorate and eventually disappear, juxtaposed against those things formed by Divine hand that last for uncountable millenia. You have probably seen this photo in countless publications, but here is my very own version:

Oddly, we've never seen the Tetons from the western side, so that will have to go on our list of things we must investigate. It seems the list never ends!
We had to do our sightseeing of the Tetons from about 50 miles south of Jackson at Star Valley Ranch--a large RV and modular home park (900 spaces) with several very small towns around. One of the towns was Alpine, Wyoming, where we found a delightful restaurant--open only 90 days a year--where we could dine outdoors and enjoy the perfect temperature in the 70s. Yes, as my friend Ed always says, "Life is Good." 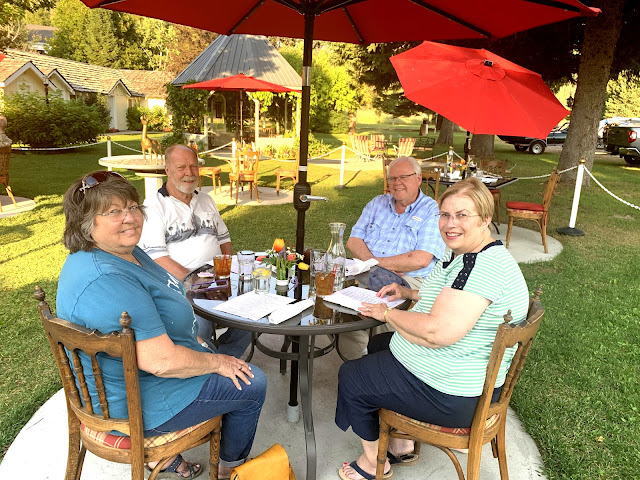 We've gotten some feedback asking how it is we are blatantly continuing our travels, seemingly without concern about the pandemic that has gripped so many parts of the nation? It seems there are still quite a number of folks who remain terribly fearful and sequestered in one spot, rarely going out except for groceries or other necessities. I will admit that, during the first couple of months of the virus, when we knew little about it, we did the same thing until we learned how to take proper precautions and we saw the reports of parts of the country where the incidence of the virus is quite rare. It must be evident that we have confined our travels to parts of the county where virus patient counts are low--some of them so low that the locals really don't seem to pay much attention to it.

So, we are concerned about it, and we remain cautious. But there are other reasons we have elected not to hide away. For one thing,  the virus cannot survive in fresh air and sunshine, and when we are not outside enjoying the wonderful climate and scenery, we're inside Phannie, with our own "stuff" that hasn't been touched by anyone else, and that can't be bad. By the way, it seems that a lot of other people have the same idea, as RV parks are nearly full everywhere we go. Yes, we're at that vulnerable age, but we take proper precautions, and we don't wish to spend our remaining years cooped up.