This will be mostly a reprise of our previous visits to Yellowstone. The reason for this is that our fellow travelers, Larry and Carolyn, had never before seen the nation's largest national park so, with the exception of a short introductory trip together, they did their tour by themselves. Below are a couple of shots from that introductory trip. The Abyss Pool is among the first geologic features you can see when you enter through the eastern gate of the park. Carolyn accompanied me down to see it. Then I took a closeup view shot, and you can see why it is called the Abyss. One can't help but wonder from what depth the steaming water comes: 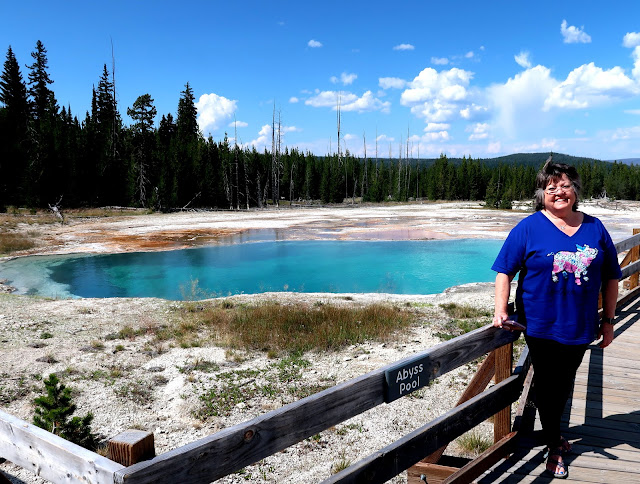 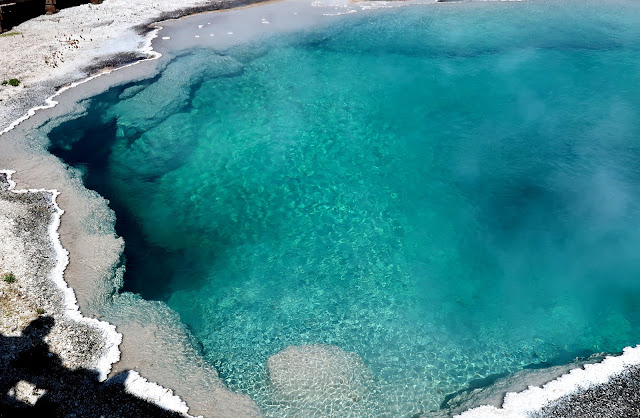 The only part of the park Sandy and I hadn't seen before was Mammoth Hot Springs, near the north entrance, and that would be our focus this time. Larry and Carolyn seemed content to do their own thing, and that was fine with us.

Let me begin by encouraging anyone who has not visited Yellowstone to do so. This was our fourth visit, and it never ceases to amaze us as one of the strangest and most fascinating places on earth. There's nothing like it anywhere else, and it's right here in our own country!

Consider that you get to drive around in the caldera of a giant volcano that erupted more than 600,000 years ago and is actually due again for an eruption, according to the history of its activity cycle. The presence of the hot magma reservoir under your feet is evidenced in many places by the hissing of steam, geysers and pools of near-boiling water that is forced upward by the hellish molten lava so near the surface.

Yet there is beauty all around, with Lake Yellowstone and the Yellowstone River being the most significant of the non-geyser features you can see. I will begin with a photo of Old Faithful that is not up to my normal standards, taken, unfortunately, as the geyser was winding down from its main thrust of spray activity. I do have a video of the entire eruption, but Sandy won't let me publish it, as she was narrating it for our very young grandsons at the time, and there are some parts that, well, didn't go perfectly (in fact, they were quite funny). Since she has final editorial control, I suppose it'll have to remain private. 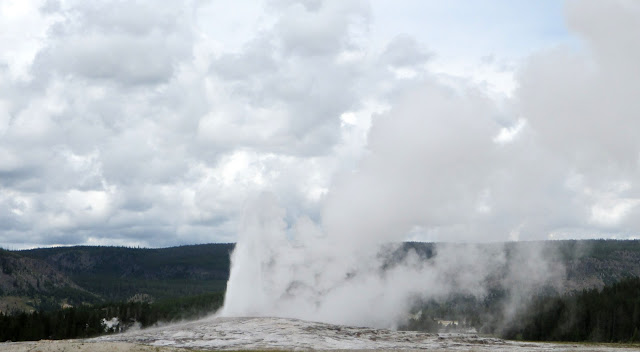 There are numerous other areas around the park where you can see the unworldly sights we mentioned--even mud pots that bubble up many odd colors that are influenced by the minerals within. I think I'll just post these--most of which were found in the Norris geyser basin--for your viewing pleasure. I really can't comment about them because, at the time, I neglected to use the name of the feature in the photo title: 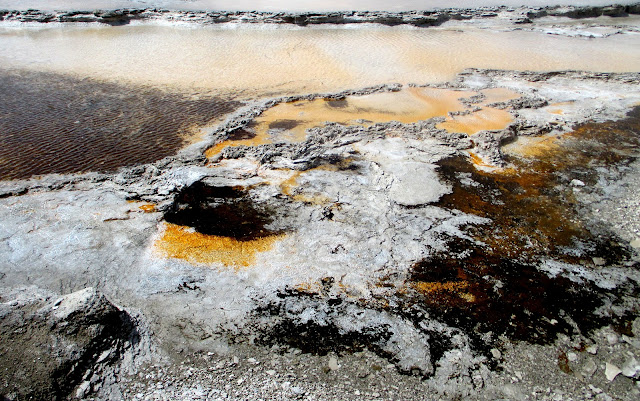 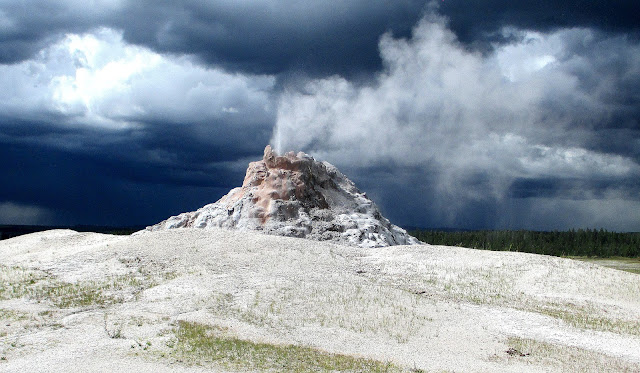 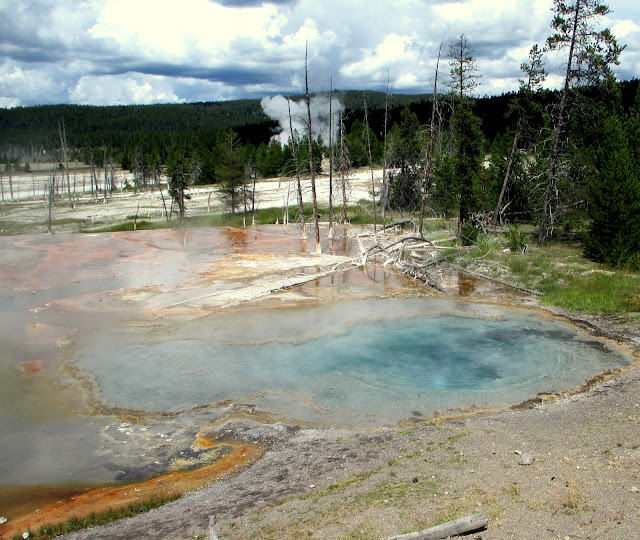 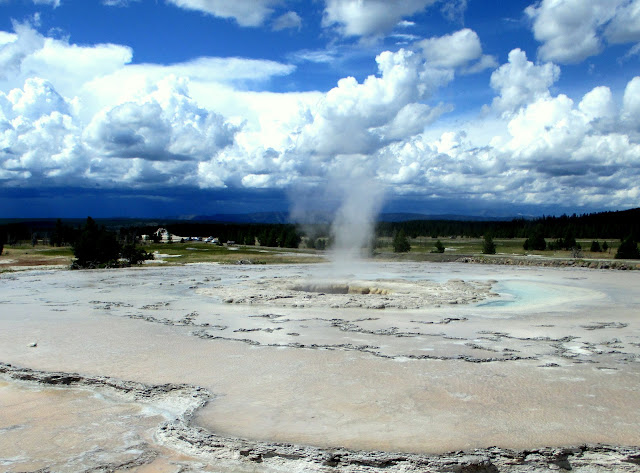 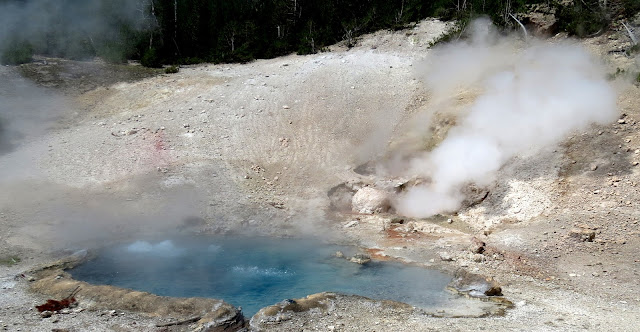 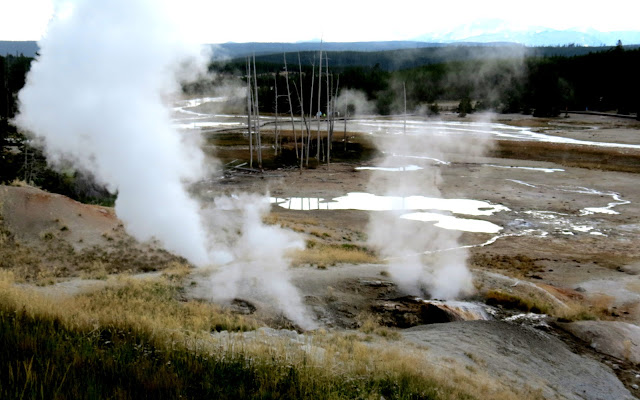 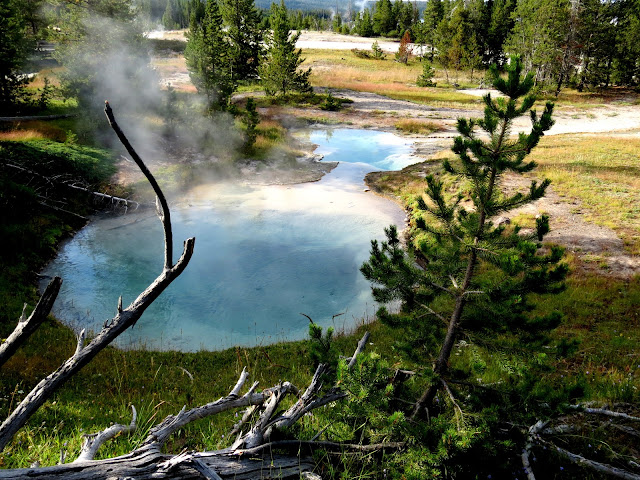 Aside from the another-world nature of the hissing geyser basins, a visit to the Yellowstone River is impressive. This is a photo of the massive power of the river just before it plunged over Yellowstone Falls, captured in the photo below this one. You can almost hear the roar as it plunges 308 feet into the riverbed at its base. 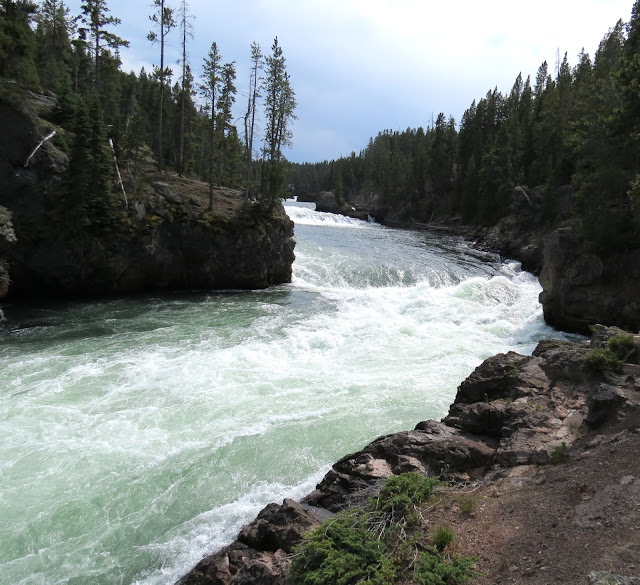 Yellowstone Falls is one of the most photographed in the country, due to its beauty and the yellow color of the surrounding rocks--perhaps from which the park gets its name. I was pleased how my photo turned out, immortalized now forever for those times when we want to relive the memories. What appears to be water turning leftward from the falls is actually huge volumes of spray produced by the water impacting the bottom of the falls: 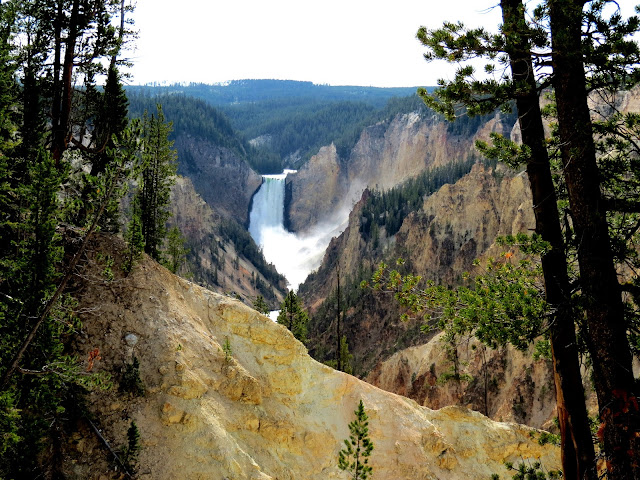 And, of course, you can't miss the beauty of massive Lake Yellowstone in the heart of the caldera. The lake will, of course, be vaporized by the next eruption, which will likely be huge and devastating to several surrounding states: 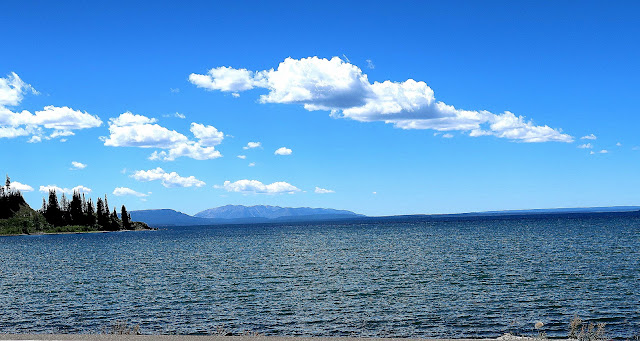 Of course, one rarely misses the many buffaloes, especially one like this huge bull, who strolls slowly by our car as if he owns the park. 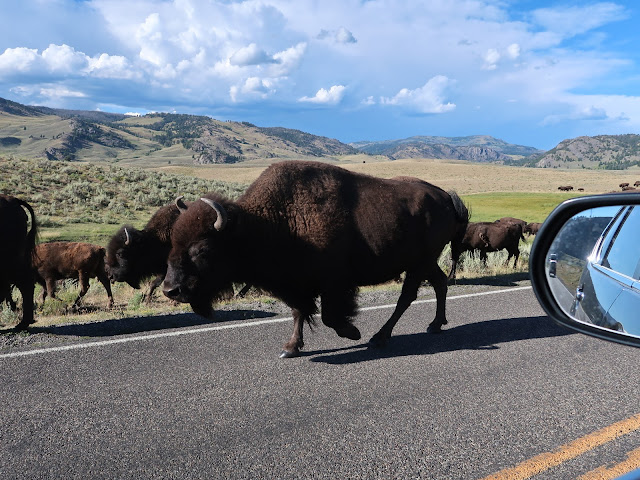 The next bull buffalo walked into the roadway and just stood there, regally, for about ten minutes, seemingly delighted to be backing up traffic both ways for nearly a mile. Shortly after I took this photo, he took a few steps forward to the middle of the road, so as to be sure no one would pass around him. What a snob! 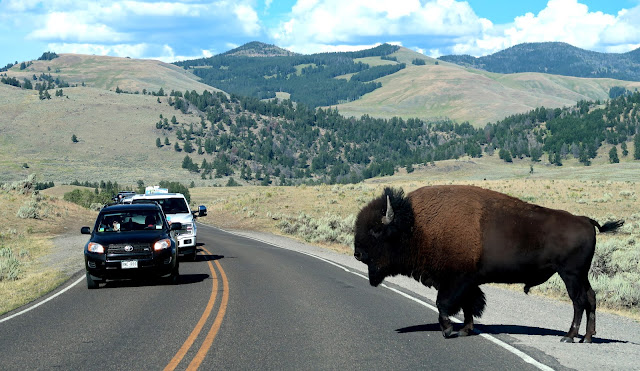 As I stated earlier, our focus this trip was on Mammoth Hot Springs, the one geyser area we had missed on previous trips. We didn't realize until we had arrived that getting a really good view of the feature would require as much as two miles of walking, much of which would be climbing stairs. This wasn't possible for either of us due to our foot and knee problems. All we could get was a photo of the top of the spring--fed by the two blue pools of hot water, which then cascaded down the huge layered structure beyond that was formed from chemicals in the water. 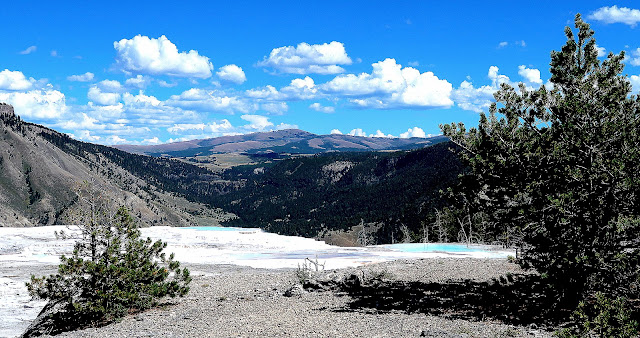 Because of our physical limitations, I had to do something I am loath to do: Use a stock photo that I didn't personally take to present the beauty of this feature: 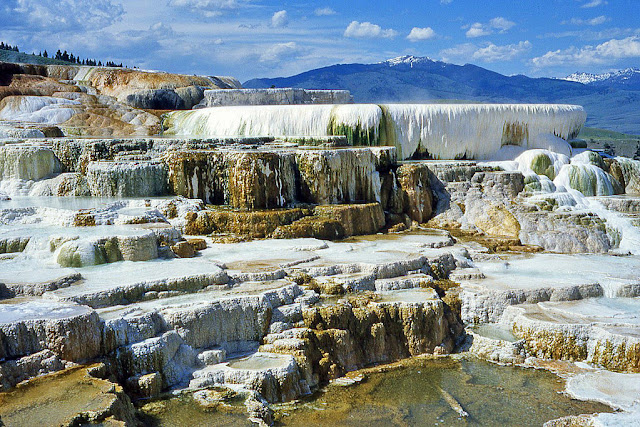 This was a bit of a jarring revelation for us, as it was one of the very few times in our 16 years of RVing that we have not been able to see something we wanted to observe personally because of the physical limitations brought about by aging limbs. This reminded us of a previous prediction we made in this blog that our fulltiming days may be drawing to a close, in favor of perhaps part-timing. We know that surgery is in our near future; the convalescence will be lengthy, and the result unpredictable.

Our advice to readers would be to make the most of the years when you don't yet have such limitations. We have done that, and we have this blog to prove it and with which we will enjoy the countless memories we have made. Yet we know of many friends who waited too late and missed out on so much the country has to offer. Please don't let that happen to you.

Not wishing to end on a less-than-positive note, you can expect our next post to include some beautiful shots from the Beartooth Highway and the Chief Joseph Byway. The one after that will include scenes from Grand Teton National Park. Stick around with us as we enjoy some of the most beautiful places in the country.