Where Are We Now?

Well, sorry I sort of left you hanging after we made our break from Washington State. We have put quite a few miles behind us since then on our way back to Texas: Spokane, Butte, Pocatello, Salt Lake City, Durango and now, La Veta, Colorado. These have been mostly one- or two-night stays, and it's not easy to come up with something worthy of a blog post with such short stays. Fortunately, there are already posts in the blog for Butte, Salt Lake City and Durango, so I haven't exactly left you empty-handed. All you have to do is search on the city names.

So why, you may ask, do you feel the urge to post about tiny La Veta, Colorado when this is also only a one-nighter? Well, two reasons:  1) There may be a handful of readers who wonder what we're doing and 2) La Veta was far more interesting than I thought. We got here over the famed 10,800-foot Wolf Creek Pass (also the Continental Divide) and, I must say, the drive down 160 from Durango was simply beautiful. I could have stopped at a dozen places and taken some great mountain photos, but we already have dozens of photos of beautiful mountain scenery in many different locations, so I decided not to take the effort to find places to pull off the road with the 65 feet of vehicles we were driving. We are also eager to get back to Texas in order to have Sandy's foot surgery done. She has suffered far too long, and I suppose that was part of my thinking.

Admittedly, there are other issues. We know we're going to be transitioning to part-time status soon, given that we are having more joint problems (my knees need attention rather badly). But there are other reasons we're making the change. By the time we make the changeover, we will have been RVing for 16 years and fulltiming for five years. Things have changed a lot in that time. First of all, we've just about fulfilled our bucket list and, at the time of this writing, I can't think of a state we haven't at least traversed. Secondly,  many of our formerly fulltiming friends have left the road, so we aren't able to get together with them nearly as often. A third consideration is the difficulty of finding RV spaces in parks we prefer. The RV manufacturers are turning them out by the hundreds of thousands, and few new RV parks are being built to accommodate them. And lastly, we know it's time. It's sort of like before Sandy and I retired; we would ask our retired friends, how do you know when to retire? Invariably, they said, "You'll know." And we did.

Verifying my frustration at finding RV spaces, I wanted to stop desperately at Moab and take a look at Arches and Canyonlands National Parks again but, alas, there was no room in the inn. Moab was covered up with tourists! The best I could do was to get a photo of an arch south of town as we headed to Durango: 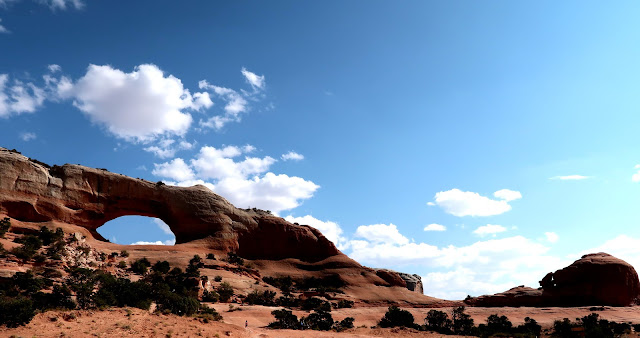 Just because we're changing from fulltiming, that doesn't mean we're getting rid of Phannie. As long as we're able, she will handle our part-time journeys--I'm sure as faithfully as she has for the last 11 years she has served us so well.

What we don't know is what--or where--our not-on-wheels home will ultimately be. That, of course, has been on our mind as well, so we'll have a number of things coming up that will be occupying our time and thought.

With that out of the way, allow me to chat about La Veta for a bit. This little one-horse town is a first visit for us and, from the looks of it, there wasn't much to expect. However, it is one of the last towns where we will see vestiges of our beloved Rocky Mountains, and highway 12 that runs through it is one of Colorado's Scenic Byways--and for good reason. We got here early enough to do some driving around, and we found some pretty fascinating geology, that I'll briefly describe. First of all, let's get downtown La Veta out of the way--a cute little town, quite rundown in places, and some of the streets are dirt. But the vibe was a little Santa Fe-ish--maybe a hundred years ago! 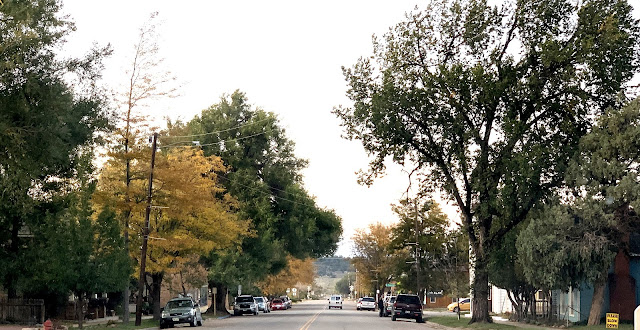 Driving out Route 12, we ran into some interesting mountain features that we happened to learn a little about by reading roadside signs.

First, there was the East Spanish Peak (or the West Spanish Peak; I'm not quite sure which it is) shown above which, at about 13,000 feet, I hadn't seen before. Notice the protrusion of rock above the trees in the lower left of the photo. I don't pretend to be a geologist, but I have read that this is harder rock than that around it, so it erodes more slowly. The interesting thing about this is that it forms a sort of backbone line that can be seen in the next photo. I'm sure there's a much more esoteric explanation available from someone less ignorant of geology--like my friend and geology professor Pat Sharp, for example. I'll get her take on it one of these days. 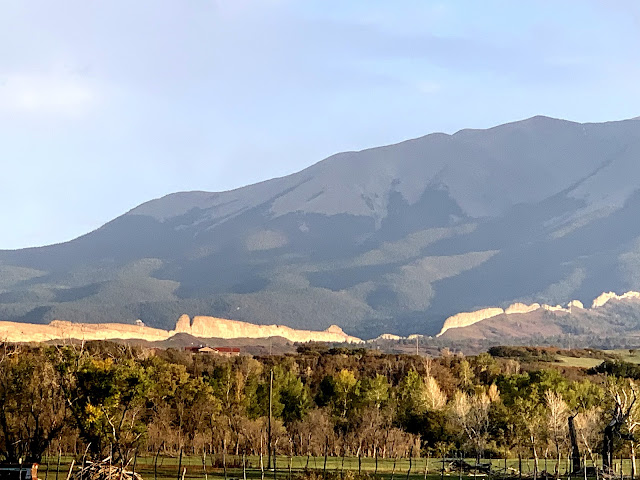 Here is the end of the backbone that I found interesting with colorful vegetation around it: 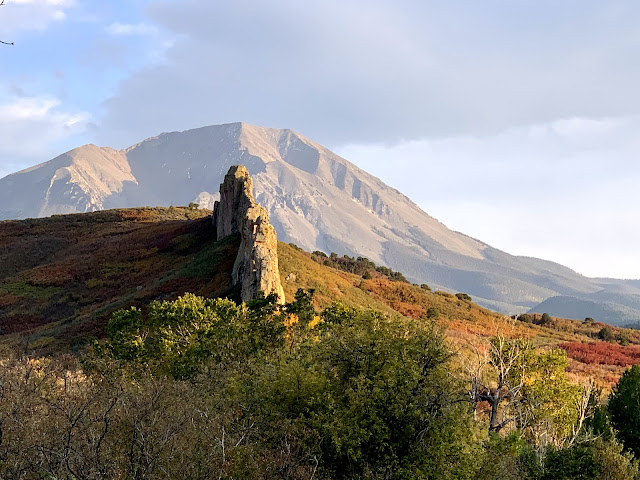 According to the information on the road signs, this is what's left of a volcano that failed to erupt, although it came close. The protrusion above the ground, presumably, is the magma that entered the throat of the fissure but chickened out. Since it is harder rock than that which surrounded it, its erosion has been slower: 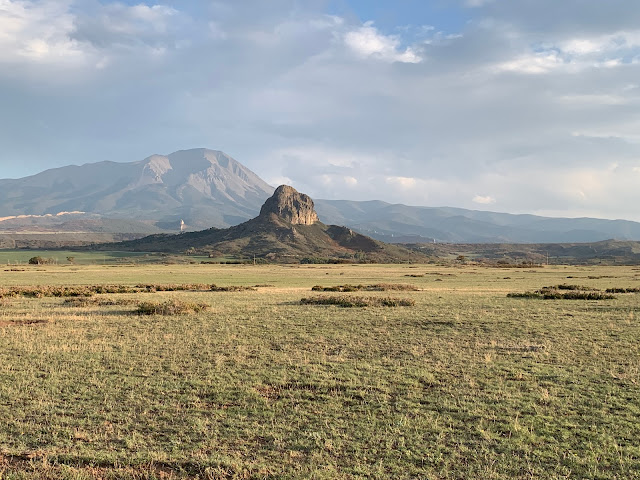 We love anything to do with folklore, so take a look at the photo below: 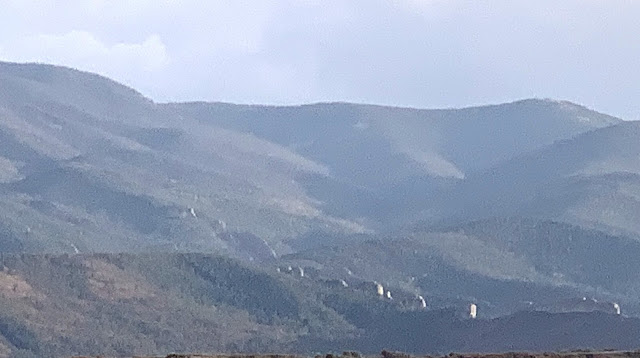 Taken at a very long range, you can see stones protruding from the mountain that form a stairstep pattern. You may be able to see them better in this next one: 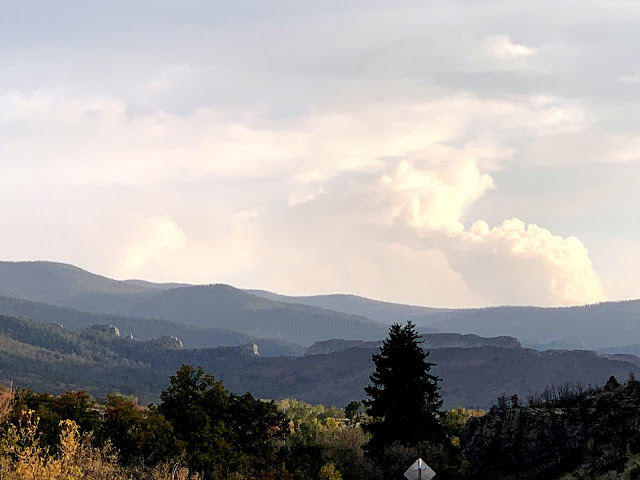 According to the information on the roadside signs, ancient Indians believed this was the stairwell the devil took when he came up from the underworld to wreak havoc (who knows what trials they may have endured?) Then, according to legend, God--or the supreme being in which they believed--ultimately forced the demon back down the stairs to the world below, and he has never emerged again. How can you not find that interesting?

I'll leave you with this photo of some more mountains around La Veta in the very late evening. It saddens me to be leaving my beloved mountains, though we must. I take some comfort in the fact that, since we don't live among them, we flatlanders perhaps wouldn't be as excited or appreciative when we see them again. 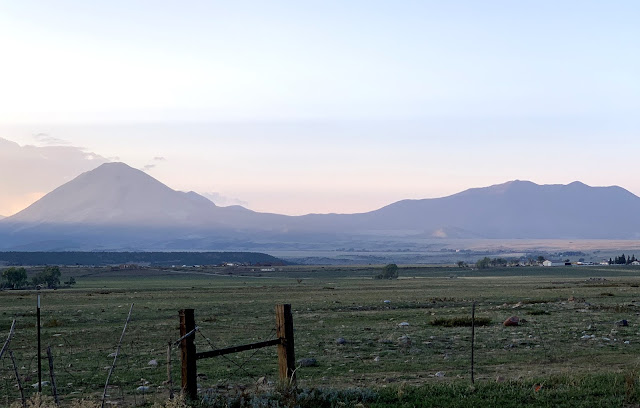 Stick around--I'll get an update to you before long. Thanks to all who have made this journey with us all these years!
Thank you, Lord, for this wonderful life;
please forgive me if I fail to appreciate it each day as I should.
We don't stop playing because we get old; we get old because we stop playing.
---George Bernard Shaw