Medical News Not So Good, But We're On the Road Again Anyway

First of all, I cannot help but recall the terrible attack in New York 20 years ago. I grieve for those who were lost, for their families and for the impact it had on our country.

Furthermore, I have done my best to mitigate my utter dismay at the current Washington administration by refusing to watch or read any news that is biased toward these troglodytes through broadcasting or writing obvious disinformation or censorship. Getting my news from trusted and unbiased sources has made my attitude much better, and I throw fewer things at the television.

My dear friend Janice scolded me, with good reason, for the occasional long lapses between my blog posts. My standard excuse is that our lives are not all that exciting if we're not traveling and seeing new things that may be interesting to readers.

I tend not to ignore Janice, as that is something to which she is not accustomed, and it usually doesn't end well. Furthermore, she is usually right about most things and has the uncanny ability to make you think she's right even on those rare occasions when the facts or truth change. (See what I mean? I can't even acknowledge that she has the capability of being "wrong.")

Janice and Dave are now dear friends whom we met while they were RVing, and we have many in that category, including Debi and Ed, with whom we had a lovely dinner recently. I wish I could name them all here, but they have showed up in this blog at one time or another.

I am, obviously, getting ahead of myself. The last blog post described our sad departure from Colorado and friends Jackie and Steve for Dante's Inferno in Texas. (Well, that's a bit of an exaggeration, as there was no fire falling like rain, as in Dante's observation of hell; in fact, there was no rain at all.) But we had gotten accustomed to the perfection of our Colorado climate, and I can't help but whine about leaving it. (Before you judge me, you should know that I'm an only child, and only children have special needs...which I translate, roughly, into 'whatever I want.')

Special needs or not, we had to get back to our doctors for post-op checkups for Sandy and a pre-op checkup for me. Some of the news was not so good. Most of Sandy's surgeries were successful. However, the operation for numbness in her hand was a failure. The surgeon is now looking for other causes; she will need a neck MRI next. My knee surgeon, who first thought I would be a candidate for partial knee replacements, has informed me that an MRI showed my condition to be too advanced, thereby indicating full replacements will be necessary. That will be coming up in a couple of months.

Before getting this news, we spent a few days at our place in Hondo, where we changed out our summer wardrobe for the upcoming winter. Being a guy, this takes about 15 minutes for me, since I don't carry many clothes in Phannie anyway. However, for Sandy, it's more like restocking a Nordstrom's, except it's never to her satisfaction. I can't tell you how many swap-outs there were...some of them swapped more than once.

When I point out that I have only about 18 inches of Phannie's closet rod (she has the rest), she explains that it is different for women--there are so many variables and so many rules for attire that don't apply to men!  When I remind her that we're retired and nobody really cares what we wear, I get "the look."  That's when I find something else to do.

After spending several days at Hondo and visiting with friends Karen and Richard, including eating a good Chinese meal, Sandy went shopping in San Antonio. It seems a couple of her winter selections didn't have the right blouse or pants or something...more clothes!

Before you find me asphyxiated with a pillow over my face, I should mention that Sandy made a real effort to weed out the clothes she didn't often wear and were not her favorites; we gave a rather large amount of these to charity. I don't know how it happens, but even after this purge, there is little evidence that the quantity has changed. Oh well, she has an uncountable number of wonderful traits so, if she's going to have a vice, let it be this.

We had only four days in Houston and, among all the doctor visits, we barely had time to see Mindy, Tyler and the kids. However, since we have to return soon for the medical stuff, we will try to be more accessible.

Okay, fine, you say; so what are you doing in Little Rock? Well, we're on our way to Red Bay, to get some new carpet in Phannie's bedroom and to have her annual service done at Bay Diesel. Tonight, we are staying at the Downtown Riverside RV Park for one overnight, where I think most RVers have stayed at one time or another. Unfortunately, the I-30 bridge over the Arkansas River is being rebuilt, and getting to the park was one of the more complicated experiences I have had in Phannie. Fortunately, a park manager called me ahead of time to give me explicit instructions, which I followed closely, and after what seemed like going through an endless maze, I found it, just as instructed. Had it not been for that call, I'm sure we would still be searching for the entrance to the park. Following are a couple of photos, the first one showing the bridge girders being replaced:

Below is the older bridge on the other side of the park, with some views of the construction barge and a bit of the park on the river: 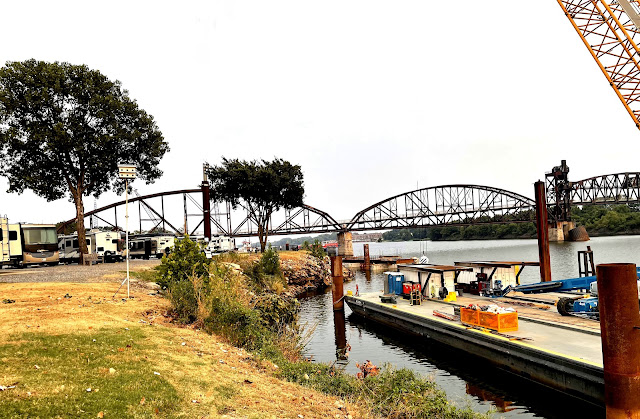 Oh, by the way, this park is no longer a Passport America park but, with a Good Sam or FMCA discount, it is still a very reasonable 31 bucks.
Well, I hope you're happy, Janice. I will try to be a little more diligent about posting, although I'm still not sure how interesting it is to talk about rather routine matters. Okay, I already know what you're going to say: "Your medical condition is not a routine matter!"

One thing I do know is that age catches up with everyone, and the things that we once could do with ease sometimes becomes difficult and painful. That's why I encourage everyone to live their dreams and don't put it off. We are thankful that we took that approach, and we can truthfully say that, regardless of what limitations may befall us, we have no regrets. We did it our way, and we're thankful that God let us have those years.