A New First for Phannie: Rehab Center for Knee Surgery

The day had finally come. My worn-out right knee would be replaced with a prosthetic one by Dr. Nathan Williams, a Fort Worth-area surgeon who specializes in hips and knees and who has previously done Sandy's knees and my right hip. Our experience with him has been superb, and his bedside manner is hard to beat. I thought it might be helpful for others who might be contemplating this surgery to see what recovery would be like in an RV.

The surgery began at 9:30 a.m. and lasted about two hours, after which he gave us the report that everything went well, even though the knee was in worse shape than he thought. They gave me a pain blocker which lasted most of the day and evening. 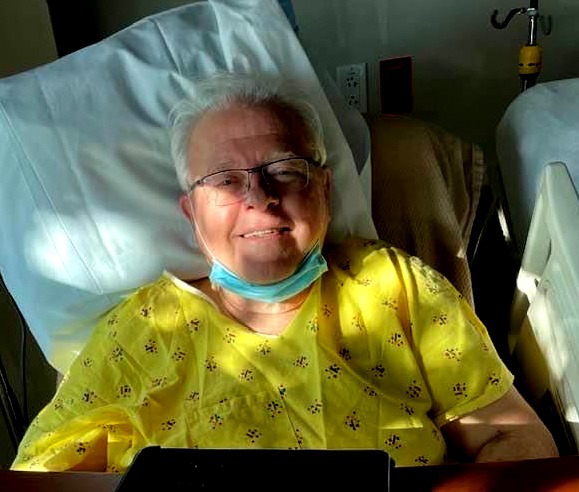 As it turned out, the pain blocker caused me to think recovery was going to be a breeze. The physical therapist had me up and walking around the unit that afternoon, and I even climbed a set of therapy stairs to make sure I would have no problem getting into Phannie when I was dismissed. The therapist voiced her encouragement and enthusiasm at my progress. Little did I know that the blocker was masking a hellish pain that would soon rear its ugly head. 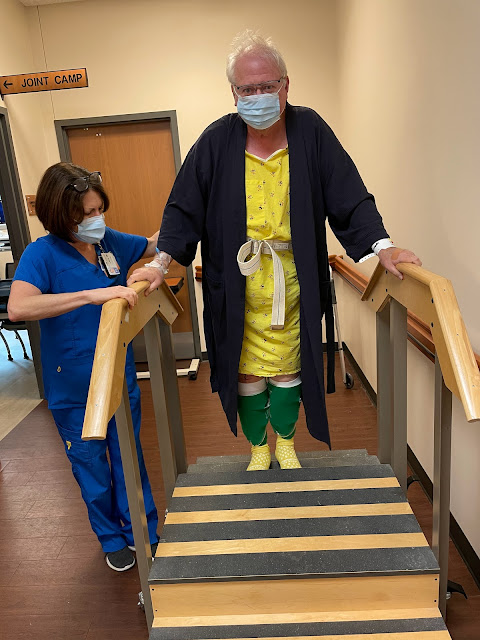 Here's the scar immediately after surgery; this will shrink considerably over time. 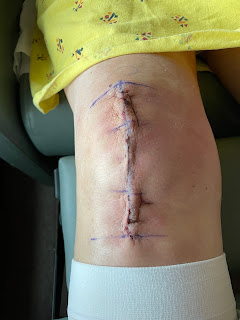 My hospital stay was two nights instead of the usual one because of a slightly high creatinine level in my kidney function, but it had normalized the next day, and I was glad to  be released. Sandy had to drive, of course, which she hates--especially in big city traffic--but I stretched out in the back seat and we made it just fine back to Aledo, some 30 miles from the hospital.  We would have stayed at a closer one, but Cowtown was the closest RV park where I could book a long-term stay.

When we arrived at Phannie's door, a problem had developed. Since the pain blocker had worn off by then, there was no way I was going to be able to climb those stairs to get inside. The pain was such that I couldn't possibly put any weight on my right foot. So, I turned around and sat on my behind as I pushed myself upward from step to step. Luckily, Phannie's stairs are fairly narrowly spaced, so my booty-scoot worked fine. However, I pray that no one made a video of it. So ended surgery day plus two.

On day three, a nurse came out to the bus to check me over and declare me ready for physical therapy (hereinafter referred to as PT). Dr. Williams had told me that day three would be the worst, pain-wise, and it was. I'm afraid I wasn't very good company for the nurse. I had the pain more or less under control with medication that day, but trying to move around on the walker was pure agony.

On day four, a PT supervisor came out to evaluate me, possibly to determine which of their therapists would be most effective in my upcoming torture. He informed me that my first "in-rv" session would be on Monday, a week after surgery. One positive on day four was that I could tell a bit of improvement in pain and mobility--not much, but enough for me to keep going.

Day five was a noticeable improvement from day four. I was able to get by with less pain medication, and using the walker was a good bit less painful. Sandy--God bless her--was there, devoting all her time to me and my needs, which seemed endless. We decided to keep meals simple, and we had numerous items already in the freezer that needed only to be nuked. Fortunately, my appetite was almost nil for days, perhaps because of the anesthesia, so not much attention to food was needed. By this day, my appetite had returned somewhat, so we celebrated by having Sandy fetch some Mexican food from the taco joint across the street.

Day six was a Saturday, so we were free to do anything we wanted--which turned out to be nothing, while in this condition. I had been experiencing strange dreams--probably from my pain meds--and, even when awake, I occasionally thought I heard voices and would even answer them. There were none, of course, but it freaked out Sandy a few times. One complete surprise is that I have been able to sleep very well at night. I certainly didn't expect that!

Day seven was Sunday, so we streamed our church service, and Sandy fixed a light breakfast. It has become quite tiresome looking at the same four walls for a week, so I'm in high hopes that my mobility will improve next week. One major effort today will be devoted to taking a shower, something that hasn't been possible because of the step-up required to get inside. We have (we think) figured out a way to use a tall chair to set outside the shower and swing my feet inside. I'll let you know how that goes.

So, there you have it--week one of post-surgery in Phannie. It hasn't been bad at all, if it weren't for the post-op pain, which wouldn't be any different if we were in a house. I'll keep you updated as to how next week goes as PT begins. I'm pretty sure they're going to hurt me.