Week two began with the first visit by Mary, my home-visit therapist. We sat for a brief chat as she took my blood pressure and I signed a form affirming that she had appeared. Mary, a somewhat large-framed woman, had been in the PT business for 30 years and, with her all-business, but personable attitude, had undoubtedly

seen just about every kind of PT patient, including one like me. Those who know me may be aware that I can be 'inventive' in spinning stories in ways that will effect an outcome that I am seeking. There is a rather off-color term for this (gift?) , so I will leave out the, um, earthy, part:  B_______ Artist.

Sizing Mary up, I didn't even try to invent any shenanigans I might use to gain sympathy, thusly lessening the severity of whatever she was going to do to me. I simply accepted my fate and checked over my will.

Actually, my fear was unjustified. The first day of PT was rather benign, with her guiding me through a routine that wasn't very strenuous but still painful, to a degree.  At the end, she had me practice walking the length of the coach several times, using the walker. During the exercises and afterward, she would grunt out an occasional "good!" I wasn't really sure if this was just perfunctory on her part to keep me going or she was actually pleased with my performance.

After the PT was done, we sat across from each other, in order for her to give me a critique. I was surprised that such a mild workout had actually caused me to perspire slightly, and I had to lower the thermostat a little.

During the critique, she produced a plastic device that measures the angle at which my new-knee leg would bend. Apparently it is desired that I be able to bend the knee to a 90-degree angle by the two-week post-op visit with the surgeon, and she seemed delighted that I was already at 108 degrees. After talking with her a while, it became clear that she was, indeed, pleased with my results of the first day. We soon bade each other goodbye and, oh, by the way, she would be here again in two days.

Mary made a rather big deal out of her insistence that the exercises accomplished today were to be repeated twice daily, even on the days she was not scheduled to appear. I immediately began thinking of excuses I could use if I weren't exactly diligent (It's not my fault; God designed me for comfort, not speed.) However, I had heard enough advice about the value to PT (plus my own successful use of it after shoulder surgery a couple of years ago), so I was determined to be successful, no matter if it killed me.

Of course, there are other things going on besides PT. Tuesday was more or less devoted to personal business like paying bills, dealing with insurance and other not-so-fun, but necessary, tasks. Sandy, as usual, was meeting herself coming and going, managing me, the medications, meals, laundry and other things I claim to be unable to do to her satisfaction. (This is probably true.)

We don't watch much TV, but I have to tell you about a couple of changes we have made lately that have lowered drastically our wireless and TV charges. When we bought Phannie eleven years ago, we had the old TVs removed, replaced by new digital TVs. We also had a Winegard Travl'r automatic satellite antenna installed, using Direct TV because we had Direct TV in the house. For those eleven years, the system has worked fine with very few hiccups.  Our cell phones were obtained through AT&T which, became the owner of Direct TV. We thought that would give us a break, but it really didn't. We also had--and still have--a Verizon Jet Pack, in case we have signal problems with AT&T.  And then, T-Mobile came out with a senior citizen plan that we gobbled up, ditching AT&T for our phone service. We also bought an AT&T hotspot, though, which gave us access to Direct TV Stream at a much reduced price. It works much the same as the satellite receiver and gives us access to AT&T streaming. And last, but not least--we're finally able to park in the shade underneath trees; streaming isn't bothered by obstructions overhead Now we have wifi service available from all three major networks at a price hundreds less than we were paying. So now, our Winegard automatic rooftop dish is no longer usable for anything, but eleven years of good service is a pretty long run. Isn't it amazing how technology changes so quickly? We've also signed up for Starlink Internet at our place in Hondo. That should be a real game-changer when it is finally available.

Okay, I digress--what else is new?

Since I was so busy on Tuesday, (Surgery Day +8), I didn't do but one round of PT exercises. My thinking was that, since I was already ahead of normal, Mary wouldn't notice. When she appeared on Wednesday, (Surgery day +9) that seemed to be the case, so I felt pretty smug. Then Mary announced that on her next visit, we would practice walking down the RV stairs and getting into the car, in preparation for my two-week post-up visit with Dr. Williams. Well, this was like telling a kid in school he was having a field trip. I have to admit the walls have been closing in a bit, having not ventured forth from Phannie for nearly two weeks!

And so it was; on Friday (Surgery Day +12), we headed down the stairs to greet a sunny day. Freedom! It was heaven!  I used the walker only on the ground, and getting in and out of Mae was easier than I thought. Here are a couple of pics with Mary paying close attention: 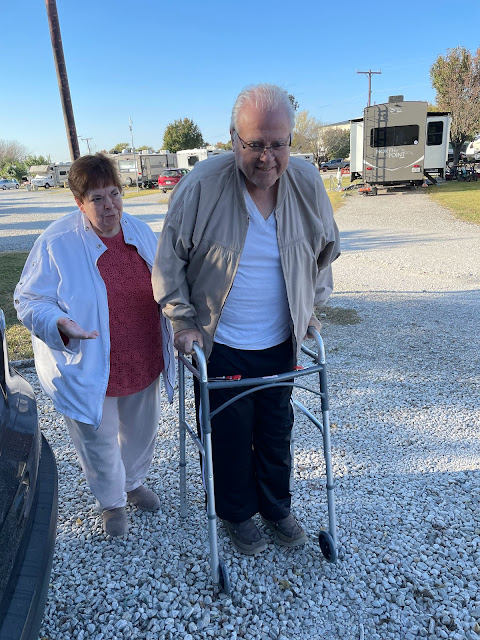 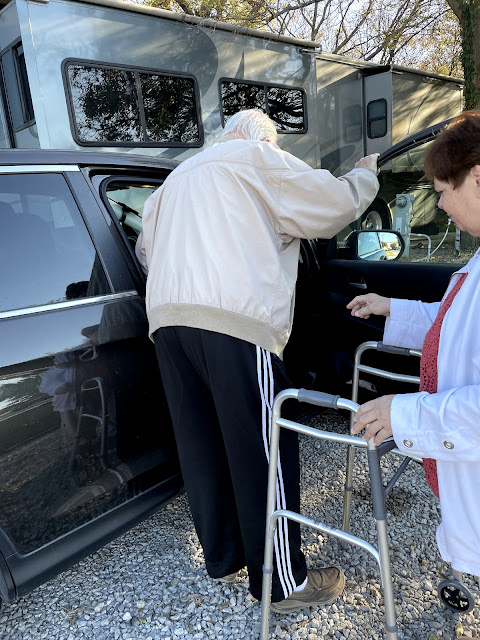 I wanted my photographer (Sandy) to get a photo of my negotiating Phannie's stairs, but she doesn't like to take pictures (because cameras are machinery--something with which she doesn't get along), but it was okay. Once I saw how bedraggled I looked, it seemed the photos were indeed of a hermit who had just been discovered in a culvert after several weeks. Clearly, I was not not thinking about my image, but my first day of freedom!  We celebrated that evening by going out to dinner--Panda Express. We ate in the car, and I kept marveling that there was still a world out here!

Perhaps it would be a good idea to share my progress in several other areas:

On Surgery Day + 4, I was able to take a shower in Phannie. Since there is about an eight-inch step-up into the shower, I had first to sit in a tall chair and swing my legs inside. It was a bit scary but, with Sandy's help, I got a decent shower. I'm sure others around me were equally happy.

I usually take a shower every day, but I opted for one every two days until I am really comfortable getting in and out of it. On Surgery Day + 12, I am now very comfortable lifting my legs up and stepping inside, so I am returning to my usual daily regimen (is someone cheering in the background?)

Also on Surgery Day +12, Mary began noticing that I was being unnecessarily dependent on the walker. She asked me first to practice just guiding the walker ahead of me but walking without using it. I was more surprised than anyone that I really didn't need it all that much. The next step she called "furniture walking." That's when I abandon the walker and walk unassisted through the room, holding on to furniture or cabinets as needed to steady myself. So there I was, walking without the walker on Surgery Day +12! Now, at Surgery Day +13, I try not to use it at all, and that certainly adds to my sense of progress.

No one asked, but it is essential for a while to have a raised toilet seat. That's one thing you shouldn't forget.

I need to make sure and acknowledge the dozens of messages, thoughts and effective prayers that have come my way from family and friends. I love you all for thinking of me.

Next Tuesday will be my two-week post-up visit with Dr. Williams. I'm looking forward to hearing his take on my progress.  More after that.