I love all my commenters but, this week, one of the earlier comments in particular stood out in my mind. She was lamenting the excruciating post-op pain of her knee replacement surgery. It was something for which she was not prepared, and she said she wouldn't have had it done if she had known about it beforehand.

I quite understand her conclusion, because anyone with a low pain tolerance would probably feel the same way. I wouldn't want to imply that I have a high pain tolerance, because I don't; I think mine is about medium for a man, whose tolerance for pain in general appears to be a good bit lower than women. I think God gave this special dispensation to women because they are the ones who give birth. If that job were somehow given over to a man, the world would probably be devoid of human life in about a century.

As I mentioned before, my surgeon warned me during his visit immediately after surgery that, for the first two weeks, I would question my decision because of the pain but, around the third week, things would change for the better. And, as it turns out, he was right. There are other guys who seem to sail through this with much less whining (I admit to being a professional-level whiner when I don't feel well. And, if I should have a cold...well, that's worth a 911 call, in my view.) For those guys who are impervious to pain, well, I would like to know what drug cocktail they're using and where I can get it, even if it is from a guy named Vinny who is carrying a .45 under his coat.

So, what's my bottom line for the first two weeks? Yes, it was painful, especially when the pain medication's efficacy began to wear off before it was time to take another dose, but it was bearable. What was surprising was that getting up and walking, while a bit unsteady, was not nearly as painful as I thought it would be. Did I have those feelings that Dr. Williams said I would have? Well, yes, to a degree, but I think the pain didn't play as much a part as did the confinement and what appeared to be the slowness in healing. Once I remembered that I am 75, not 25, I think my recovery has been remarkable. Healing doesn't go all that quickly when one gets old.

With the last episode, I was about to make my two-week post-op visit with Dr. Williams. That turned out to be a nothing-burger of sorts, as all he did was to take a look at my incision and move my leg back and forth. He seemed very pleased with what he saw (he should know, because he does about eight knee replacements on each surgery day), so I was sent on my way to out-patient physical therapy, which will begin next week. However, I know what to expect from these people because of my shoulder surgery a couple of years ago. The doc wants to see me again toward the end of January if I survive the therapy.

Physical therapists are wonderful professionals, without whose attention joint surgeries would not be nearly as successful as they are. I wanted to get that out of the way before pointing out they also have split personalities, and the other one is psychotic and sadistic. What else could explain their smiling while seemingly dismembering you with all kinds of instruments of torture? Oh, well...I really don't need to go into that; If you've had physical therapy, you know what I'm talking about. So pray for me next Tuesday; I know what awaits me.

I see I have not related anything in this post to recovering in an RV. I suppose I would say that the only negatives so far have been negotiating Phannie's stairs--which really hasn't been a big deal--and the increased feeling of confinement in the small space. It would have been nice to have had a larger area in which to practice walking; I think that has been the only thing that I can see as a negative so far. The positive, of course, is that you can go wherever you wish for treatment--in this case, to a surgeon with whom we've had excellent results for, now, the fourth time--soon to be fifth, when I have the other knee done.

I am finishing up this post on Day 19 after surgery, and I am pleased to tell you that the excruciatingly slow recovery seems suddenly to have reached a turning point. I am beginning to feel like my old self again, and my knee doesn't seem like the center of my annoyance universe any longer. The therapists will do their thing and, if I survive that, I'm hoping to have a new and more useful knee. I'll keep you posted.

I also notice that I have not provided you with a single photo in this post, which is not my style. So, here is one of my favorites as we look back at all the places we've been in this incredible 16-year journey, six of which have been fulltime: 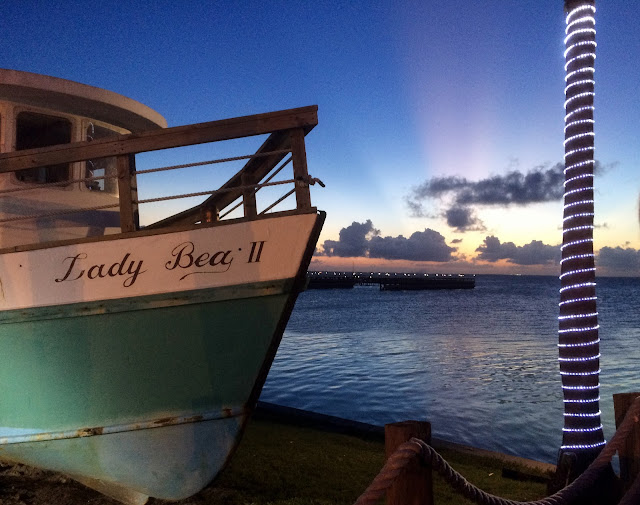 This is a well-used and now retired fishing boat at sunset in Port Isabel, Texas.