Okay, This is Embarrassing!

No, the blog hasn't gone dark; I'm still here. However, things are a-changing, methinks. We seem to be entering a new phase in our fulltiming/part timing lifestyle that appears to be brought about largely by the inevitable aging process. It is said that a child's world is very small until he or she reaches adulthood, when the world grows large and potential is seemingly limitless in many areas, including travel. However, in later life, their world slowly gets smaller until their confines return to that of a child when their cognitive and physical abilities diminish with their passage into old age.

I wouldn't want you to infer from the above that Sandy and I have suffered much cognitive decline, at least that we can perceive (some may disagree). However, the last few years have presented some physical challenges, and we have the surgical scars to prove it. These have been illuminated ad nauseum in prior posts, so there's no need to rehash any of that. Even though surgical repairs have been made and parts replaced to enhance our mobility, an aging body is sort of like the Bop-A-Mole game, where something unexpected begins to hurt, creak or leak from time to time. This adds to the frequency of visits to health professionals to get that mole bopped down again. If you're in your seventies or better, you know what I'm talking about. If you're not there yet, you can get a glimpse herewith of that to which you can look forward!

Besides enriching health providers, there is another very effective means to lessen the impact of the unwelcome moles that pop up; it all has to do with one's attitude. We try to concentrate on the positives--the things we can do, our wonderful family and the many cherished friends who are almost family to us. We thank God for each new day and try to ignore or beat back the moles that keep popping up. (Have I worn out that metaphor yet?) Sandy is naturally better at brushing off adversity than I; I think men, in general, are predisposed to whining about things that don't go right, and her lack of complaining can be annoying at times. See? It's not hard for me to find something about which to whine!

Now before you get the idea that my lack of presence in the blogosphere is due to my being holed up in a pity party or some kind of 12-step program, we are not doing nothing. In fact, we have been quite busy, recently spending a month away from our digs here in Hondo to visit family, celebrating grandson Pryce's birthday and visiting with friends in the eastern part of the state. Meanwhile, while there, we took care of some end-of-life business that befalls everyone when the realization of the inevitable shows clearly the loose ends that need to be tied up. Once accomplished, however, these can be forgotten, replaced by more pleasant things.

I've written previously about our reasons for buying into this Escapees park--mainly having our home (Phannie) and our stuff (stored in the cabin) together in a place that we own. Since the cabins here are not equipped for fulltime living, they can be claimed on the tax rolls as 'sheds,' thereby generating an insanely low tax footprint. Being classified as a shed doesn't mean that it can't be very nice inside and outside--projects in which we have been heavily involved lately. (Photos of the inside later.)

When I think back at all the crowing I have done about having gotten rid of the drudgery of keeping up a stick-and-brick house, I feel a little sheepish about having a small resurgence of that drudgery with our place here in Hondo. I guess it hadn't occurred to me that any edifice in which one at least partially lives--no matter how small--always requires attention. For example, I had to buy an electric hedge trimmer the other day--after I had given away my old one when we began fulltiming, and I thought then I would never have to use one again. Following the acquisition of our tiny stick-and-brick cabin, we have had to acquire anew many of the house-upkeeping tools that we had given away, all the while sneering at the poor souls who would have to be using them. Karma is alive and well, it seems.

That brings me to the concluding thoughts about this new phase of our lifestyle and the years that led up to it:

1) In the initial phase of fulltiming, we were drunk with freedom; we couldn't wait to go and see all the things on our bucket list. We were always on the move--sometimes exhaustively. I remember writing about the most inane of details--about everything; it was so exciting!

2) As time went by and we began to develop friendships along the way, we tended to moderate our traveling frenzy to include places where we could interact with those friends for a longer period of time.

3) Even when we were not with friends, our traveling was moderated in favor of staying a longer time at the places we had grown to enjoy.

4) In the next phase, which stretched over years, we traveled to see most everything on our bucket list, so we found ourselves returning--and off the road--for a full season at the places we liked.

5) In the current phase, we feel the need to have our own home base--however modest--from which we do an even lesser amount of traveling. We find now there is really no substitute for being home, irrespective of what kind of home, as long as it's ours.

So, are we no longer fulltimers? I guess we're not. We seem to have flopped into part-timing after about six years.

Since we are quite happy with our setup here in Hondo, we've decided to dress up the place a bit. We hired a landscape company to revamp completely the entire area around the cabin with near-carefree hardscape. The company had a designer on staff, so we prevailed on him to make a unique design for the front yard, and he certainly did.  Here is a photo, taken as the workers were beginning the job; you'll notice they have removed part of the horrid chain-link fence that the previous owner had installed to keep pets from roaming: 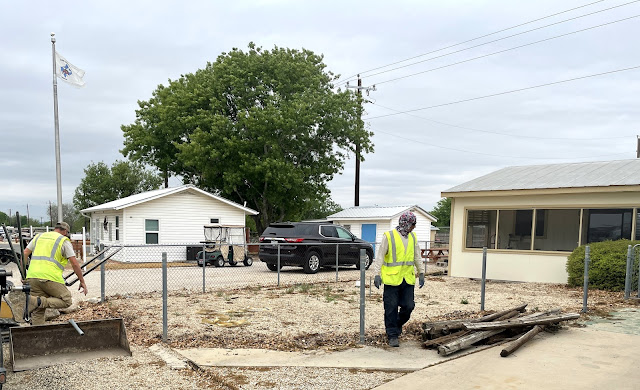 The weed barrier beneath the old pea gravel had deteriorated, causing a fight with weeds that I was about to lose. The company removed every bit of the pea gravel and the old weed barrier, bringing in new, plus river rock, flagstone and crushed granite to make this design: 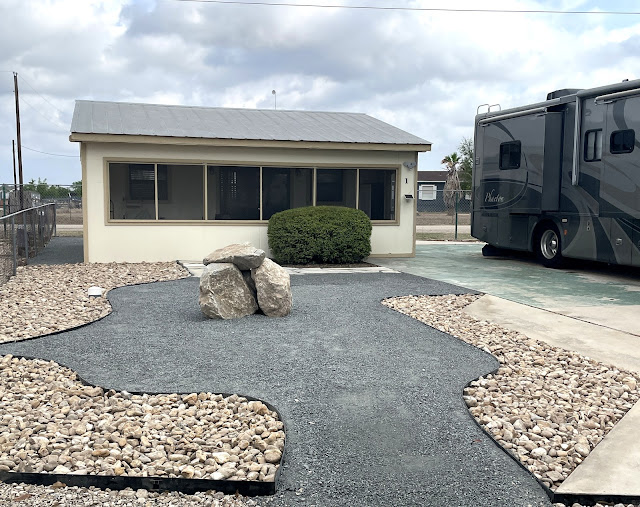 The photo above was taken from the street in front of our place, and it shows the minimalist design that we wanted. You'll notice the dark crushed rock is roughly in the shape of the state of Texas with a stack of large boulders in the middle. The boulders, to which I refer as a mini-Stonehenge, is a real head-turner for many of the park's residents, whose tastes generally run in a much more traditional vein. The purpose of stack of stones, of course, is to evoke curiosity in the viewer as to 'what it means.' The truth is that it has no intended meaning; it means whatever the observer thinks--good, bad or indifferent.

In this instance, the design has some of the aspects of modern art, which I  always thought was a bit silly, as I couldn't figure out what the artists were trying to show with odd blotches, squiggles and tortured shapes. Then I realized that it wasn't necessary to figure out the 'meaning' of the piece; whatever I thought about it, in most instances, was the meaning, and so it is with the landscape design. We are becoming much bigger fans of minimalist simple design and, if we were to build another house (not gonna happen), we would need to resurrect Frank Lloyd Wright to design it. As you can imagine, there is nothing else like our lot in the park, and there has been no shortage of head-scratching from those who pass by. We just smile and do a high-five. Success!

This project--the cost of which was hard to swallow--still isn't quite finished. One last row of chain-link fence, visible in the photo, has now been taken down, to be replaced by a wooden rail fence. The driveway, which is painted dark green in places--for reasons known only to God--has yet to be sandblasted. There is another small area of pea gravel at the rear of the driveway and along the other side of Phannie that will be refurbished in the fall with river rock.

Now that we've been here a while, we are meeting new friends besides our old friends and fellow residents, Richard and Karen. Here are a couple of photos that show some of them: 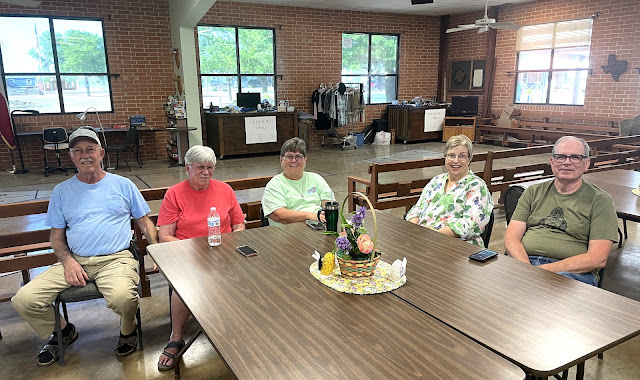 Richard and Karen are on the left of the photo above, and new friends Patti and Gary are beside Sandy. They are sitting in the park's event center. 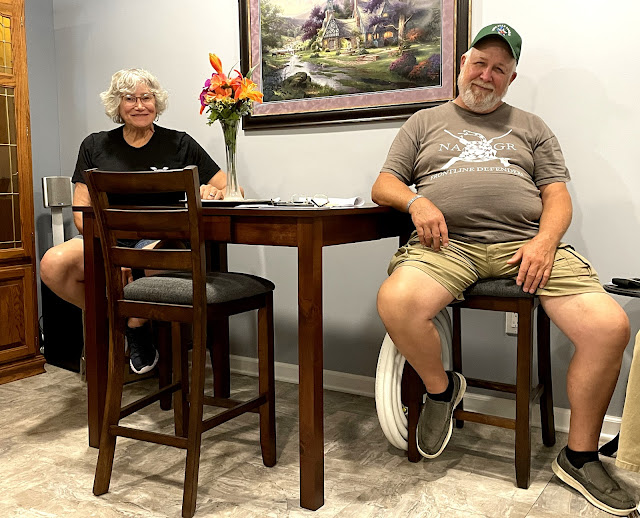 Lanie and Walt, above, are busy renovating their cabin. Unlike us, they are annoyingly talented at this sort of thing, but their friendliness helps us overcome our own inadequacies in such endeavors.

About a month from now, we will be leaving for the Dallas area, where we will help grandson Mason celebrate his 13th birthday at the Great Wolf Lodge. After that, we will be making our way to Colorado to spend the summer, with a stop near Plainview, Texas, to visit friends Bubba and LouAnn and their family.

I appreciate all of you who have stuck around during my serious posting deficit. My entries will undoubtedly pick up steam when we leave for Colorado.