We awoke after a pretty good sleep and went downstairs to avail ourselves of the complimentary “breakfast” served by the hotel. What they offered was no different from all the other hotels like this that serve insipid cardboard cutouts of real food to make you think you are getting something worth eating. Most of the stuff was in the form of cereals, unripened fruit and something laughingly called rolls and pastries. I am convinced these hotels give contracts to bakeries with instructions to make their products attractive looking but as completely devoid of taste as possible, so as to discourage the guests from taking more than, well, one bite. But, no biggie, I thought; I never cared much for breakfast anyway.

We returned to the room to await checkout, which we delayed until 1:30 p.m. I spent the morning working on the blog while Sandy spent the morning, uh, “getting ready.” I’ve never really understood this elaborate ritual of hers, but I have learned over our 33 years together that analyzing it is futile and perhaps even dangerous.

Amazingly, we departed the hotel in our taxi at the appointed time and became the captive audience of a cab driver who was a native Bostonian and whose indigenous accent was as thick as any we had heard—a native dialect totally devoid of the letter “r.”  The cabbie was eager to talk about his hometown, and we would not have been unhappy to hear it, except for the fact that we understood very little of what he was saying.

After waiting an hour in the obligatory processing line with 1,668 other passengers, we finally boarded the Norwegian Spirit, a large vessel about 900 feet long and weighing 75,000 tons, much of which was our luggage. We wandered around the place for a while and eventually found our stateroom, which I think was in steerage. The room was quite small, much like the one we had on our last cruise to the Caribbean a few years ago on Royal Caribbean. We were quite apprehensive about the bed this time, as the mattress on the Royal Caribbean ship was nothing but thin foam and very uncomfortable. This one, however, seems much better. Looking around, we remarked at how Homer, our fifth wheel RV, is a good deal roomier! The Norwegian Spirit was built in Germany and, as a result, seemed a little over-engineered; all the structures and appointments seem very sturdy and well-crafted, but that’s not necessarily a bid thing when it comes to something like a ship or an airplane. 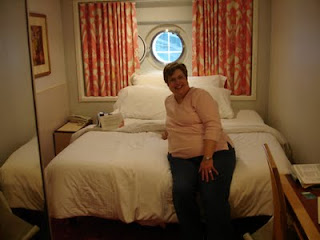 Since we had had nothing to eat since attempting to ingest the fake food at the hotel, we were starved, so we found the ship’s buffet, which was one of eight restaurants that were available. As with any buffet, some of the food was quite good and some was, well, meh. I had some outstanding sauerkraut and Sandy had some pork patties and stir fried vegetables that she said were quite good.

After we ate, all the passengers were directed to designated assembly areas on the promenade deck, wearing our life vests for an emergency drill. Each assembled group had an attendant who attempted to shout instructions we would need in the event we needed to escape the vessel. The area was very noisy and, since the attendant had a heavy oriental accent, we didn’t comprehend much of what was said. I’m thinking that it wasn’t very important, however, because we got the vests on, saw our gathering point and identified our lifeboat. What else do we need to know other than where to put our sack lunch and Sandy’s makeup? 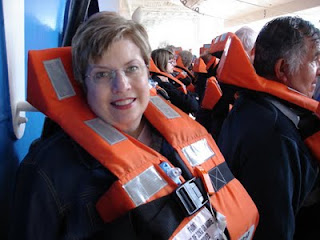 Shortly thereafter, the Spirit’s horn blew three times and cast off the lines. We were off, uh…backing up! Yes, the captain backed this thing out of its berth and out into the harbor without a tugboat in sight. Modern ships don’t need them, of course, because of the thrusters now incorporated into the bow and stern; what will they think of next?  We went to the stern of the ship and watched the city of Boston slip quietly into the sunset as the great ship headed into the open sea. 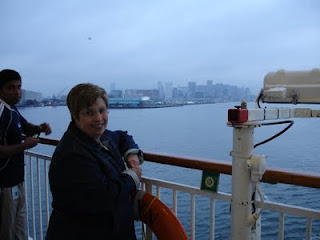 After roaming the ship for a while, we decided to have a late dinner and went back to the buffet, where we had among other things, bean salad, flank steak, asparagus and fried rice, all quite good. 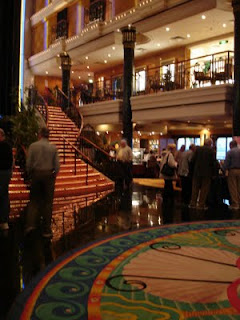 Next, we went to the ship’s theater, a huge place that we thought was larger than the one on our Royal Caribbean ship. The variety show was quite good and lasted just a little more than an hour, which we thought was just about right. As you might imagine for an excursion to enjoy fall foliage, most of the folks on this trip were on up in years. In fact, we were asking ourselves what we were doing on this ship with all of these old people? You gotta give them credit, however, for getting out and staying active. We believe you’re only old if you think you are!

After the show, we were pretty tired, so we turned in and had a fairly decent sleep, sensing the faint rocking of the ship as we smoothly sailed along.
Posted by Mike Mills at 4:30:00 PM