, named for John the Baptist, was a fitting place for us to be on Sunday, we thought.   Unfortunately, this place appears to have little else going for it, except the distinction of being the oldest incorporated city in Canada and the home of the Reversing Falls on the St. John River.  It also has an ice-free port and is home to a significant shipbuilding facility.

Now, back to the :  This describes a phenomenon that occurs twice daily, at high and low tide.  The tides at this location are very pronounced, raising and lowering the water level up to 30 feet between high and low tide!  The St. John River, emptying into the bay, is caused to reverse direction for a few miles at high tide when the sea water pours from the bay into the river channel, pushing the river water back upstream.  Then, at low tide, the direction of the flow is reversed and the river water pushes the sea water back out into the bay.

These monstrous tides resulted in a funny story about , which I recount here at my peril.  When we arose this morning, the ship was docking at high tide, and we could see the wharf and its associated buildings quite clearly through our porthole above the dock level.  We went to the breakfast buffet, and then became preoccupied back in our stateroom with her “getting ready” ritual (discussed in an earlier post with some trepidation).  She was oblivious to the fact that the tide was quickly going out and was causing the water level—and the ship—to descend several feet at its moorings.  While was primping, the ship slowly descended with the water level and our porthole sank beneath the surface of the dock.  When she stepped out of the bathroom, all she could see was the side of the concrete pier instead of the nice view of the port area we had had earlier.

“My Lord, we’re sinking!”, she shrieked, and began to scratch around in the suitcase for her jewelry case, makeup (naturally) and other valuables.

After I explained the tide situation, she calmed down a bit, but she had to sit down for a few minutes.

So, main claim to fame appears to be related to tides, and that’s about it.  Even the cruise line’s excursion brochure was skimpy in its attempt to lure passengers ashore.  The Spirit was docked quite close to downtown and, from the large windows on the 12th floor of the ship, we could see just about all we needed to see of this rather nondescript place.   We strolled down to dockside for a few minutes and decided it was too cold and windy to investigate further.  Some of the passengers who had made the trek out to said it was a bust because they were not there at the time of day the river reversed course.  (Looks like they could have figured that out beforehand from the tidal calendar.)

Back on the ship, we spent a good while in the ship’s library, where read a book and I posted to our journal, checked e-mail and read other blogs.  We had hamburgers for lunch and then relaxed our cabin until dinnertime.   At departure time, we went up to the 12th floor to a viewing area with large windows overlooking the ship’s bow, where we sat and marveled again at the maneuverability of this huge ship as it backed away from the dock and turned itself around in the small channel before heading out to sea. 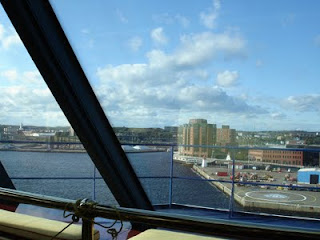 As we departed the harbor, a very talented barbershop quartet was singing in the lounge behind us.  After they finished, we went to the main dining room and decided to repeat the steak again, this time with melon soup and fatoosh (middle eastern salad); it was just as good as the previous night's dinner.  We had an excellent table at a window overlooking the as the sun sank behind the low shoreline.  The evening show was a Broadway extravaganza with some incredibly professional and talented dancers and singers.

All in all, it was a very relaxing day; we enjoyed it immensely, though we didn’t even manage to leave the dock area.