is a much larger city than we expected—a population of about 500,000.  We elected to take a city tour when we arrived at the cruise terminal.  The city was founded by the British in 1749, and it retains much of the British influence today.  In fact, it is said that many of the residents still consider themselves British subjects, although has been a self-governing dominion since 1867.  is frequently visited by members of the British royal family, and Prince Charles is due to visit here in December.  Many of the older houses and buildings are reminiscent of those found in , complete with the gardens and manicured landscaping favored by the British.  We found it to be an altogether charming place. 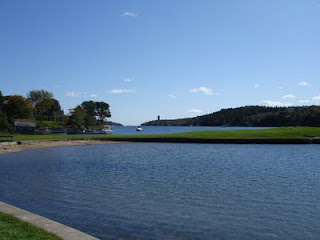 has one of the largest natural harbors in the world and played a key role in World Wars I and II as a protected final embarkation point for convoys of ships sailing across the .  It also has the sad distinction of providing three ships that sailed to the site of the Titanic wreck in April, 1912, to pick up bodies of the victims.    In all, 249 bodies were recovered and brought back to for burial, while the survivors were taken to .  We made a stop at the cemetery where the gravestones of the Titanic victims were arranged in rows forming the shape of a ship’s bow.  Not all of the victims could be identified, and their gravestones remained nameless.  The cemetery is located in a quiet wooded area near downtown, and Sandy and I couldn’t help feeling a sense of deep sadness as we viewed the gravestones, some of which displayed the names of entire families, including young children, who perished in that senseless disaster.  One of the gravestones displayed the name “J. Dawson,” the name of the character Jack Dawson played by Leonardo DeCaprio in the recent Titanic film.  Looks like the filmmaker did his homework in picking the real name of a Titanic victim, although the real Jack Dawson was employed as a boiler tender on the ship, a backbreaking job shoveling coal to feed the boiler fires.  Unlike the DeCaprio character, this poor lad would have had little time for romancing Kate Winslet. 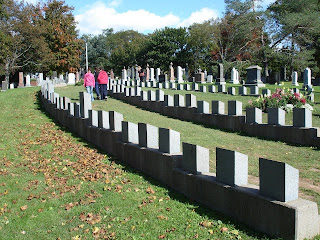 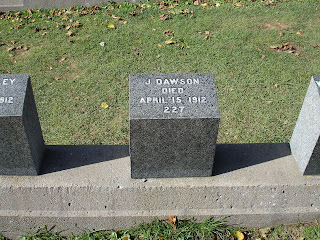 was the site of another disaster of its own back in 1917, when the , a military vessel full of gunpowder and munitions, collided with a Norwegian freighter and exploded in the harbor near downtown.  The city is situated in a bowl-shaped area, and this topography served to intensify the effects of the explosion.  About 2,000 people died and 9,000 were injured in the blast, and the town was largely destroyed.  I don’t think many people in the know about this event, even though it remains the worst manmade accidental explosion in history.  By contrast, the ship explosion in 1947 claimed 581 lives.

We toured the before leaving, and found it very interesting—especially the artifacts retrieved from the site of the Titanic sinking.

We walked a good bit in the very nice development near the cruise terminal and then returned to the ship to enjoy another tasty hamburger.  Then I posted yesterday’s blog entry and we went for dinner—an excellent sautéed halibut entrée with melon soup, artichoke salad and strawberry soufflé.   Delicious!  I still can’t get over how good the food is on this ship.  One would never expect this quality to be maintained, considering the thousands of meals that have to be prepared every day.

After dinner, we saw a comedy troupe in the theater.  They were quite good, as all the other entertainment has been on this trip.