The very noticeable whooshing sound of the powerful bow thrusters, signaling the Spirit’s final docking maneuvers each morning, had become a familiar sensation by now, a rumbling alarm clock that would not permit further slumber.  When the captain was satisfied with his parallel parking exercise, the thrusters fell silent, and the dockworkers on the pier looped the mooring lines around the bollards. (You didn’t know this is what they call the spindle thingy on the dock, did you?  Neither did I.)  The mighty ship was at rest for the day.

It was Friday, and Sandy and I were elated to be in , our final cruise destination and the start of two relatively short airplane rides back to .  Our luggage had been taken to the ship’s hold the previous evening, and we had only to wait until our appointed departure time of to leave the ship.  Because of the number of passengers aboard these large cruise ships, those who depart are given a specific time to show up at the gangway, the times based on groupings of about 250 passengers for each 15-minute increment.

We ate a leisurely breakfast seated next to a gentleman of about 70, who asked if we were leaving the ship here at .  We said that we were and, with a dejected look, he said that he and his wife had booked a round trip and that he still had a week of this $#!% to go.  (Call it a wild guess, but I figured his experience wasn’t exactly positive.)  Sandy and I contemplated what we would do if we were only half finished with this trip.  Ruling out suicide as being a sin committed perilously close to when we would be held accountable for it, we decided we would merely beat each other senseless with ’s hair dryer.  Then it occurred to us that that wouldn’t work, because the one who was the recipient of the first beating would not then be conscious to beat the other.  We decided we would need two hair dryers, so that we could pummel each other simultaneously, hoping that we would lapse into unconsciousness at the same time.  (Perhaps I should offer a suggestion to the cruise line that they provide this service themselves, conveniently including the charge among the countless others on the passengers’ cruise ID cards; it could be a real profit center for them.)

We walked down the gangway at exactly and cleared Canadian customs fairly quickly.  We hailed a cab to take us to the hotel and took note of the French influence in the architecture of old churches, hotels and government buildings.  The only negative was that these beautifully ornate masterpieces were surrounded by nondescript, boxlike buildings indistinguishable from those in other large cities.  What a shame, I thought, that the city’s development couldn’t have been more imaginatively themed in the context of the legacy structures.  Downtown traffic was a mess, even though there were separate lanes for buses and taxis.  The taxi driver’s frustration level became evident, as he drove like a madman once having cleared the ubiquitous and ill-timed traffic signals.  Our hotel was near the airport and far from downtown, so after the white-knuckled ride to get there, we decided not to spend forty more dollars each way to return to downtown and do some sightseeing.  Besides, it was cold and windy, and I was still a little worried about a relapse of my illness of the past few days. 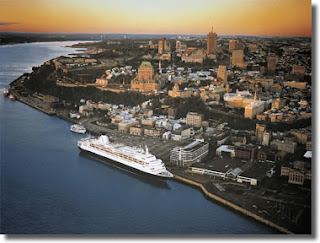 So, we curled up and watched television, most of whose programming was meaningless because it was broadcast in French.  This made for frequent napping and, after eating nearby at a forgettable Chinese buffet, we turned in for the evening.  A word on the Chinese buffet:  This was probably the worst Chinese food we ever sampled, located in one of the most expensive custom-built buildings imaginable.  We were still hungry when we left, because the only thing we found up to our standards was chicken-on-a-stick.  Oh, yes, the almond cookie was also pretty good.  They didn’t even have any chili sauce (finely chopped red peppers in oil, a standard Chinese condiment—like our ketchup).  Yet patrons were flocking to the place, presumably thinking it was good food.  Are our standards perhaps a little high?  Well, maybe, but they can’t be that high, considering some of dives we often patronize.  The glaring omission of the chili sauce reminds me:  These folks in the north have no concept of spicy food.  We have had nothing spicy to eat since we left , and now that I think about it, that’s probably what made me sick!  (I bought a jar of salsa in medium was the spiciest they had--but I’ve been saving it for an emergency; that time may have come.)

On Saturday, we woke up early, excited that it was going home day.  After a short ride to ’s smallish but very clean and modern airport, we discovered that ’s reservation for this flight had been snarled by the computer.  I printed out the tickets months ago, but didn't notice in the tiny print of the schedule that would be leaving late in the afternoon today but then leaving , our connecting point, around today.  Obviously, that made no sense, and I should have double-checked it.  The result was that wasn’t listed on this flight, and it was overbooked!  A seat was available three hours later, so we elected to split up, causing a good deal of trepidation on her part, as she had not been through airport customs before by herself and was counting on my knowledge of the Detroit airport (because I flew airliners into there often in my previous career) to facilitate the experience.  I reassured her that I have seen no news reports of people entering customs areas and never coming out again, and that, in all likelihood, she would be fine.  With a less-than-happy look, she bade me farewell, and I was thinking I may have chosen a bad time to have been so flippant.

My flight to was uneventful, and I noticed the customs and immigration area had been completely remodeled and seemed foolproof enough.  Good!  In the security checkpoint line, I found myself standing behind a German family consisting of an older man and woman, their daughter and son-in-law and two grandsons, aged about seven and four.  The daughter was the star of this show, dressed in what I could only describe as a black satin “goth” jumpsuit, on the back of which was embroidered a large elaborate gray skull and crossbones with a red heart in the mouth of the skull and the words “Love Kills Slowly” on a banner overhead.  On the back of her neck, I could see the words “Kiss Here” tattooed just below her black dyed hair, and when she reached for a piece of luggage, I noticed that her fingernails were painted black.  The whole group was in a state of chaos, as the gothic daughter was berating all the other family members loudly in German, undoubtedly laced with profanity.  The older boy looked quite normal, except that the back of his hair had been allowed to grow into a tail, the tip of which was cut into the shape of a spearhead.  The younger boy, who was the oldest child I had ever seen with a pacifier in his mouth, appeared catatonic.  The group had a huge collection of carry-ons and multiple layers of outerwear, all of which had to be removed and run through the x-ray screener.  The area looked like the aftermath of a tornado, as clothing and shoes were strewn everywhere, being scooped up with the other carry-on items in no particular order and pushed down the conveyor belt, the gothic daughter screaming in German at the rest of her cowering family and the security agents.  I thought to myself that I would rather let a terrorist into the than this woman.

Why do I think I need to recount this observation here in a travel blog?  Well, I don’t know, but I agonize a great deal about the decline of modern culture and the increasing lack of a religious and moral underpinning of society.  This makes me very sad and fearful for Mindy and her family.  We need to pray for our country while we’re allowed to.

The rest of the day’s travel was uneventful, and both our flights--Sandy's a little later than mine--were right on time in Detroit and Dallas.  It was very good to get back home.  Cruising?  We’ve got that box checked.