A Peaceful Stay in Northeast Indiana Among the Amish

If we had to pick somewhere to go through the rigors of trading cars and outfitting a new toad, it would be hard to find a prettier or more peaceful location than this. Because of the influence of the large Amish and Mennonite population, rural areas such as that around Shipshewana (an old Indian name) are bucolic havens of impossibly green cropland, dotted by well-kept farms, barns and silos. The black horse-drawn buggies used by the Amish and Mennonites are everywhere, with special lanes set aside for them at the edge of some of the highways. 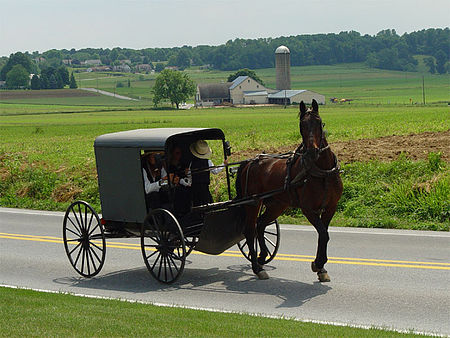 In town, stores have special parking areas for the buggies as their owners come in from the country to buy the things they need:

Due to the quaintness of the area and the availability of quality goods--especially furniture, in this area--produced by the Amish, LaGrange county is a haven for tourists, who contribute handsomely to the economy of tiny Shipshewana (pop. 628).
There are neat hotels and restaurants here--even live theater at several venues within 50 miles. We attended one play with an Amish theme, and it was quite good.

If one is intrigued by the prospect of returning to simpler times, the Amish lifestyle has much to recommend it, considering its lofty tenets of honesty, humility, hard work, family orientation and frugality. However, their desire to be separated from worldly excess (based on a Biblical passage in Romans that tells Christians they are not to be "conformed to this world") is among the things that pique the interest of the carloads of curiosity-seekers who often clog the roadways that the Amish share precariously in their horse-drawn vehicles. The downside to living as we did a hundred years ago, besides the clash of cultures, is that, well, we would live like we lived a hundred years ago. For those accustomed to modern conveniences, it would be quite a shock to become Amish. That is the reason few outsiders join the movement.

While there is plenty of information available on the Amish and Mennonite sects via the Internet, here are a few things of interest that I found:


If I have misrepresented any of these facts, I'm sure someone more familiar with the subject will correct me. And, in case it's not clear, I view these folks with great admiration. However, living their lifestyle would be quite difficult for me--spoiled, undisciplined and unaccustomed to hardship as I am. I would also have some difficulty with the pacifism part--not that I would unilaterally do harm to anyone, but I there is not much I wouldn't do to protect my family or my country.

The Amish like to eat, and they make a lot of good stuff that is widely sold to tourists in the area. We found these pretzels to be really good at Jo Jo's in Shipshewana: 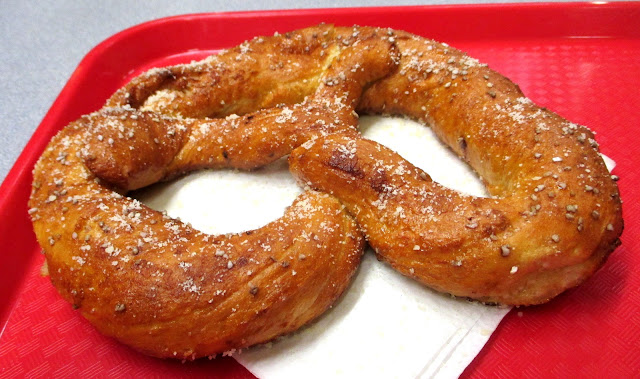 We found some excellent marinated chicken breast at Yoder's Meat and Cheese Shop here in Shipshewana; in fact, I would characterize it as the best ever! We are loading up on this stuff for the freezer!

While I'm on the subject of food, we have sampled a couple of the insanely popular buffet restaurants nearby--the Blue Gate here in Shipshewana and the Essenhaus in Middlebury and found them wanting.  Now, before I'm branded a heretic, let me say that there's nothing wrong with their food; it is fresh and plentiful, but it is so boring! Both restaurants, which are inexplicably packed with diners most of the time, offer the same basic things on their buffet: Fried chicken, roast beef, meat loaf, mashed potatoes, canned corn, noodles and green beans. Of these, the fried chicken was clearly a standout, but everything else? Meh. One problem is that they seem never to have heard of spices up here. Being from Texas, I enjoy spicy food. Frankly, I'm fine with enough Scovill heat units to at least make it interesting, but I prefer the burn to be only slightly less than that required to sear the membranes inside my mouth. Around here, a grain of hot pepper would die of loneliness; I guess the all-you-can-eat buffet lines are the draw. My advice is to skip them unless you need a fried chicken fix.

One curiosity that appears in several small towns in the area is the placement of life-sized statues in front of certain businesses. Here is a very life-like postman in front of the Middlebury post office: 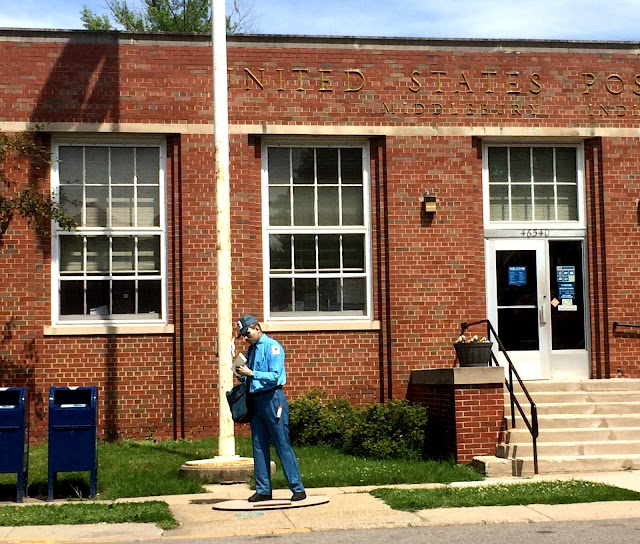 Our CR/V will be getting a new Blue Ox base plate and connections installed at Dan's Service Center in Elkhart. With all the RV manufacturers in the area, this large shop stays frantically busy all the time. It took about a week to get an appointment. While we're waiting, we plan a visit to the Studebaker Museum and the Oliver Mansion in South Bend. That'll be in the next post.