We caught a shuttle bus that Ford runs between the museum and the factory, a journey of about ten minutes. We disembarked at a very nicely appointed visitor center near the F-150 assembly line, where we were directed to five different stops. The first two stops were in small theaters in which we were shown films about the history of Ford Motor Company and, in the next theater, how a Ford F-150 pickup is assembled. The second video was an incredible experience of sight and sound, complete with lasers, surround sound that we felt in our seats and even gusts of wind at some points. I will tell you that if Ford was trying to demonstrate its complete immersion in the latest technology, they succeeded.

After recovering from the theater experience, we were ushered into the factory, where we walked about 1/3 of a mile around the perimeter on a wide catwalk that looked down on the assembly line below.

Unfortunately, I can't show you any photos of the assembly area. Ford was adamant about no photos being taken there, reinforcing this admonition several times during the tour, even telling us that we should not even take a cell phone or camera out of our pocket lest it be confiscated. There were security guards everywhere that seemed ready to enforce this rule.

We were allowed to take photos outside the assembly area, and they had a newly-minted F-150 nicely positioned for that purpose: 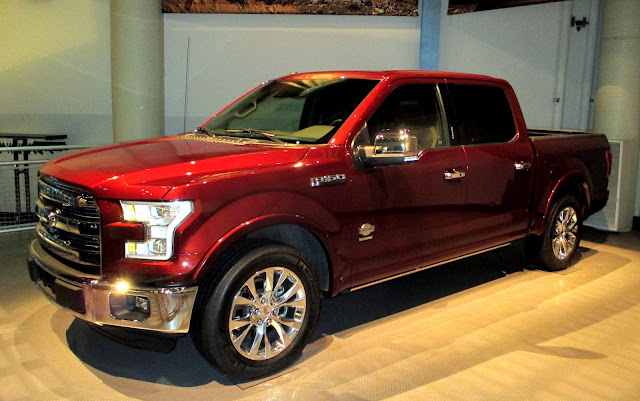 Nearby was an F-150 chassis that we were able to see up close: 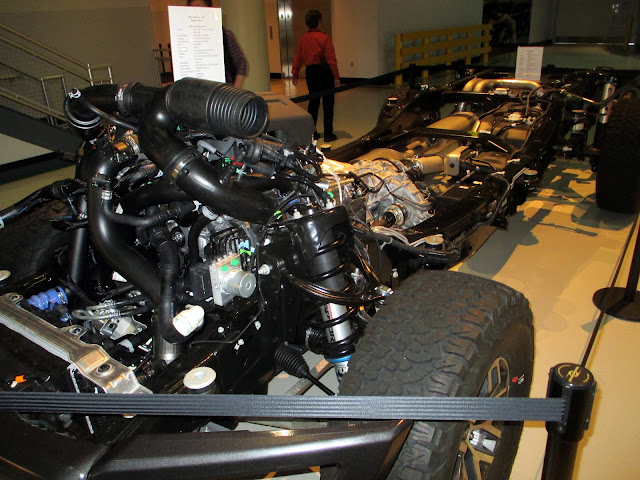 I was able to download from the Internet an inferior photo of the assembly line, but it hardly matches what we were able to see from the catwalk: 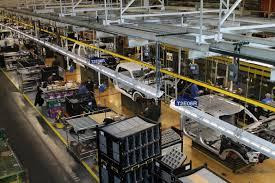 Let's just say that, for someone who had never seen an automobile assembly line before, I was flabbergasted that such an enormously complicated industrial ballet could be dreamed up by the mind of man. There are so many thousands of actions that must happen at exactly the right time to the incomplete vehicles gliding inexorably around the plant, each on its own wooden platform. In general, two workers were stationed on either side of the truck, installing or fastening several items before the truck moved beyond their work station. If any action was omitted, or if some required part wasn't timely in reaching the workers' bins, the line would have to be stopped, much to the consternation of the supervisors, I'm sure.

But no stoppage occurred while we were watching. The employees seemed very intent on performing each task quickly and thoroughly, and a fleet of tugs looked like ants, pulling around trailers full of parts that somehow arrived at just the right time at the right workstation so that no bins ran out of parts for the workers to install.

I left almost dizzy as to how this incredibly complex wonder of industrial engineering came to be so that a brand new F-150 would roll off the assembly line every single minute for 20 hours a day. The assembly of a truck requires only 30 minutes from the time the first part is installed at the beginning of the assembly line until the finished vehicle rolls out the door under its own power.

From the third floor of the visitor center, we could look out over the vast 2,000-acre River Rouge industrial complex that Henry Ford built after he acquired the land in 1917 for fifty cents an acre. Again, the next two photos are from the web and not of good quality, unfortunately:

Ford sought the land specifically because a navigable river was on one side and a railroad spur on the other. 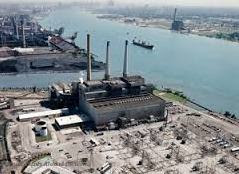 It was via these transportation assets that Ford was able to realize his dream of creating a self-sufficient industrial complex where he could bring in and process raw materials that would be used in onsite facilities like a steel mill and glass plant, among others. The factory had its own electrical power plant whose generators were operated by nine gigantic coal-gas fired engines having 6,000 horsepower each. Having almost total control over the entire manufacturing cycle meant much better planning, economy and flexibility. At one time, the facility had 16 million square feet of factory space in 93 buildings, employing 100,000 workers.

Ford's facilities have been spread out to other locations nowadays, and the giant facility has been downsized, but it was for a long time the largest manufacturing facility in the world.

With this bucket list item completed, we will be leaving Michigan for Shipshewana, Indiana (on the recommendation of RV friends John and Bobbie Jo), where we will spend a few days in Amish country awaiting the end of the July 4th holiday before we start our trek westward. It's just too difficult to find RV spaces during holidays. When the weekend warriors have all gone back to w*rk (I still can't bring myself to spell out that awful word), things will get back to normal, hopefully.

We were so glad to get back to some halfway decent roads. Most of the highways we traveled in Michigan were in horrible shape, leading me to wonder how much stuff has been jarred loose in Phannie and Mae. Poor things!

Thank you, Lord, for this wonderful life; please forgive me if I don't appreciate it enough each day.
Posted by Mike Mills at 12:38:00 AM