Miles and Miles of Miles

After the challenging first day of our trek westward from Indiana, things settled down, and the next two days proved totally uneventful. We were making close to 400 miles a day, purposely doubling our usual 200-mile daily travel limit in order to hasten our journey through mostly nondescript Iowa and South Dakota. (Sorry, residents thereof; I'm sure these are wonderful places to live.)  We had never driven through either state, and we found that we hadn't missed much except maybe a billion green cornstalks that were beginning to show their tassels nicely.

On the positive side, I-90 gets the award for the smoothest and most pristeen U. S. Interstate highway we have traveled. I suppose its need for repair is low because of the paucity of traffic that uses it. Here is a photo of I-90 in South Dakota taken through Phannie's windshield: 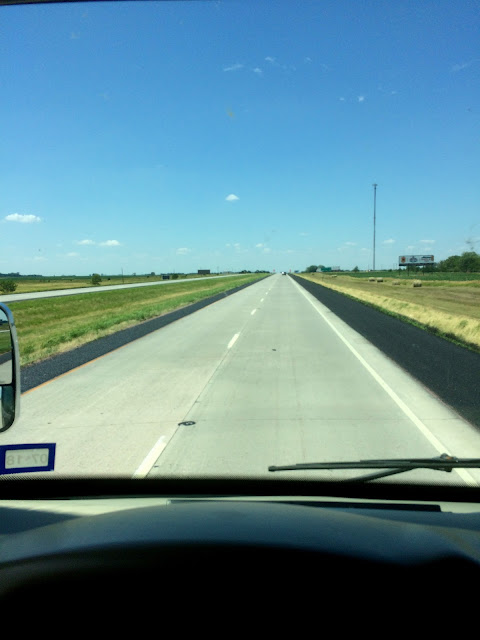 I can't remember the last time I saw an interstate highway with so little traffic on it.

Owing to the unchanging flat topography around us, these long driving legs would have proved incredibly boring, had it not been for our heaven-sent Sirius XM radio. Fortunately, I rarely get tired when driving Phannie. The big bus just floats along, silent except for a little wind noise. (The rear engine can be heard only faintly from the cockpit.) The plush captain's chairs provide plenty of legroom, allowing a seated posture much like an easy chair in one's den. There is none of the torture of sitting with my long legs stretched out horizontally in front of me. With all the creature comforts accessible, like a bathroom, fridge and unlimited snacks, I can drive some pretty long legs in Phannie without very much physical impact at all.

We arrived in Sioux Falls, South Dakota with enough daylight left to do a little exploring, so we checked out the falls on the Big Sioux river, from which the city of Sioux Falls, of course, gets his name. It was a very pretty location where the falls looked great flowing over the pink quartzsite: 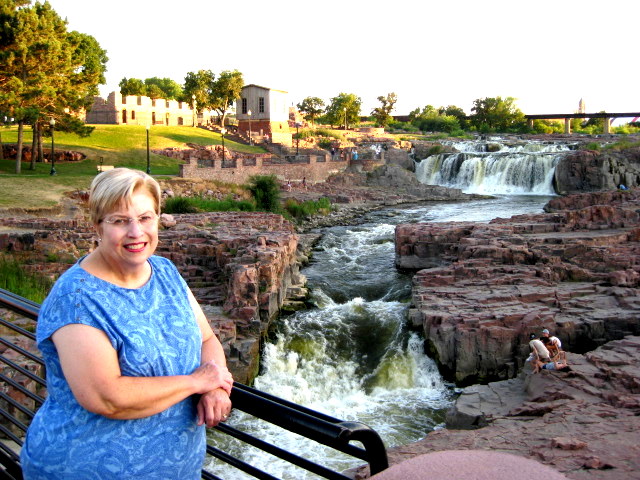 As we neared Rapid City on I-90, we began to see more and more signs advertising Wall Drug, a place I had heard of for decades but never visited. I knew I would likely not get another chance to see what is the big deal, so we exited I-90 and drove the few blocks into downtown Wall, a rather small little burg bustling with hordes of tourists. There was ample parking available, even for Phannie and Mae; so, after parking, we strode over to Main Street and stared at the block-long complex that is Wall Drug: 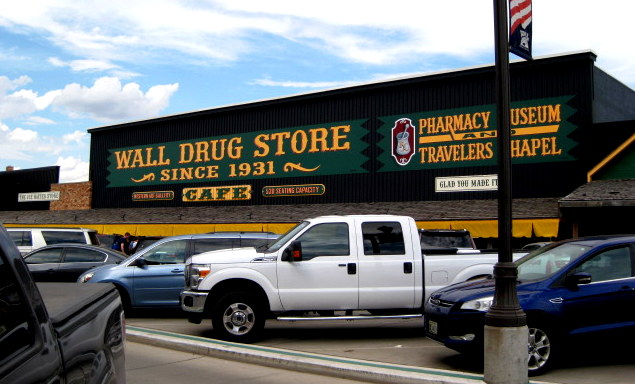 I'm not sure what we were expecting, but it wasn't exactly this. The original drugstore has obviously expanded and taken in several other stores beside it, having now grown to a monstrous 76,000- square-foot, western-themed, mall-like affair, selling everything imaginable that might appeal to a tourist. There are also restaurants and a soda fountain and, oh yes, a pharmacy. The place was packed with people, so we went out back to the kids' area, where I snapped this pic of Sandy in a mid-1800s version, I guess, of Phannie: 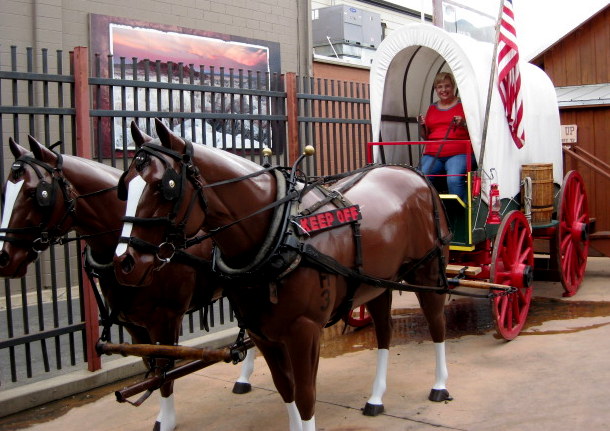 We didn't buy anything at Wall drug, but at least we can say we have been there. Perhaps the most interesting thing about the place is the history of how it came to be:

In 1931, a pharmacist named Ted Hustead bought the drugstore and tried to make a living from it in Wall, a tiny town of 231 people in South Dakota. Things weren't going all that well until his wife came up with the idea of giving free ice water to travelers heading down the nearby highway toward Mt. Rushmore. This freebie proved to be a hit with thirsty travelers, and Hustead began advertising heavily on billboards in South Dakota and surrounding states hundreds of miles distant. Due to its almost cultish following, some visitors have taken it upon themselves to erect signs in many different parts of the world displaying the mileage to Wall Drug.

The drugstore, huge as it is today, is still a single business entity, and they still give free ice water and sell coffee for five cents a cup. It is one of the largest tourist attractions in the northern U. S., hosting some two million visitors a year from many different nations.

I'm not sure why.

After our brief stop at Wall Drug, we quickly covered the 71 miles to the Heartland RV Park, our destination near Rapid City, where we met up with Bobbie Jo and John, RVing pals from Texas. More adventures to follow!


I had rather own little and see the world than to own the world and see little of it. --Alexander Sattler
Posted by Mike Mills at 11:19:00 PM