The Studebaker Museum and Oliver Mansion in South Bend

(Before we get started, I might mention that the "Best of the Best RV Parks" page has been updated with several new listings. There is a link to it in the right hand column of this blog. Be sure and let me know if you find a park that should be included.)

While we were waiting for our appointment to get the new tow package installed on the new Mae, we spent some time touring the Studebaker museum and the Oliver mansion in South Bend. These were very interesting, and they took us back to our youth (Studebakers were still being built when we were kids; the last one was built in 1966), and our tour of the Oliver mansion gave us a glimpse of the lives of the wealthy around 1900. I've always enjoyed the historical period of the mid 19th century to the mid-20th, so I'm always ready to go on tours like these.

I think Sandy looked good in this 1950 Studebaker convertible; don't you? 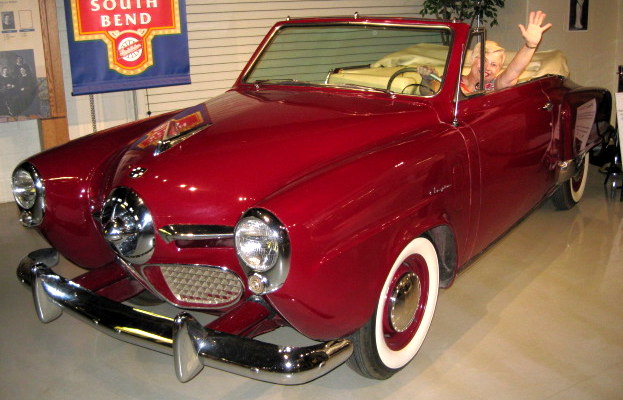 We gained an appreciation for the industriousness of the Studebaker family (they changed their name from Studebecher when they immigrated to the U. S. from Germany) and their ability to transform a wagon-making business into an industrial giant that turned out 500,000 cars a year in 1950.

Studebaker built horse-drawn carriages in addition to wagons and one of the more interesting displays was that of carriages that served four presidents: Grant, Harrison, McKinley and Lincoln: 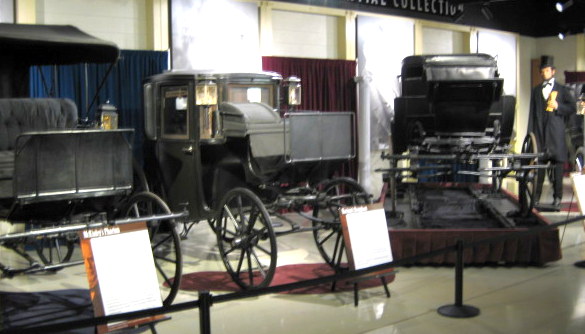 On a sad note, two of the carriages were the very ones in which presidents Lincoln and McKinley took their last ride on the occasions of their assassinations.  Here is Lincoln's carriage: 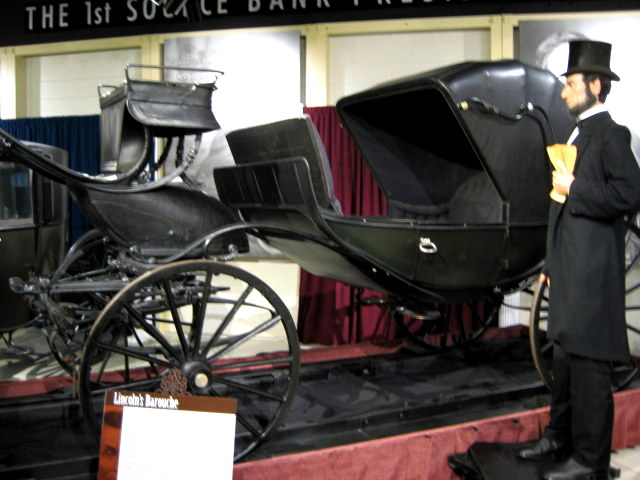 And here is McKinley's carriage: 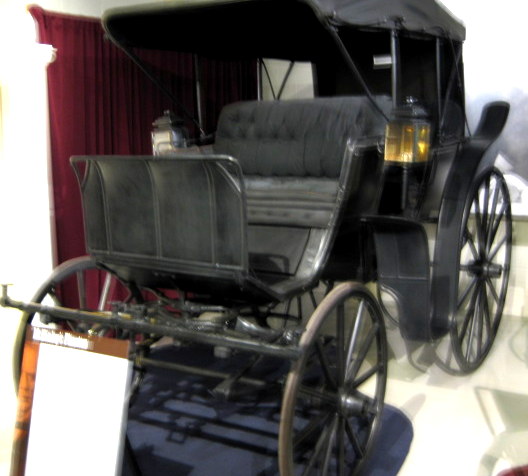 Below is another Studebaker that I hadn't heard of--a child's hearse. According to information in the museum, it was not uncommon in the early 1900s for funeral homes to have white hearses for children's funerals. The white color was to symbolize the innocence of the children, and we found this quite sad, having lived through the loss of a child ourselves. Of course, advances in medicine within the rest of the 20th century resulted in a dramatic decline in childhood fatal diseases, and these hearses eventually disappeared: 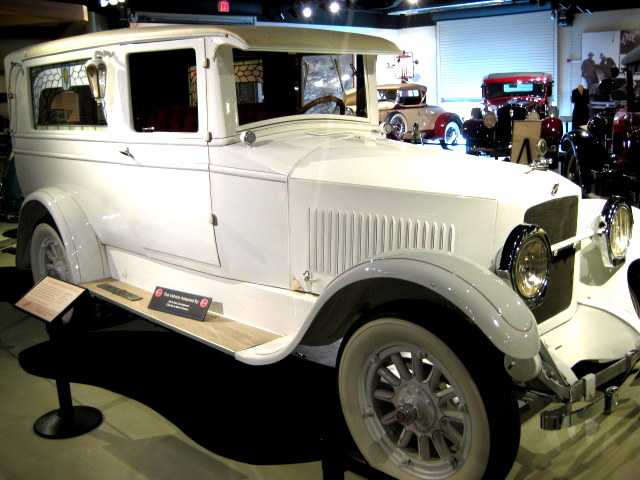 This was my favorite of all the Studebaker cars--the 1950 Commander Starlight. I still think it was a unique and interesting design for 1950: 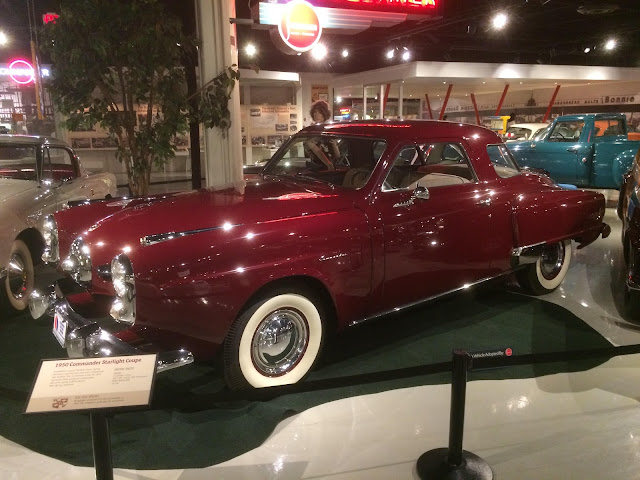 The car below was the very last Studebaker car built, having been assembled in Canada on March 17, 1966. The company didn't go out of business, however; they were well diversified by then and did a significant amount of manufacturing for the government. The company's divisions were ultimately absorbed by other firms, however, and the Studebaker name disappeared from the business world in 1969. 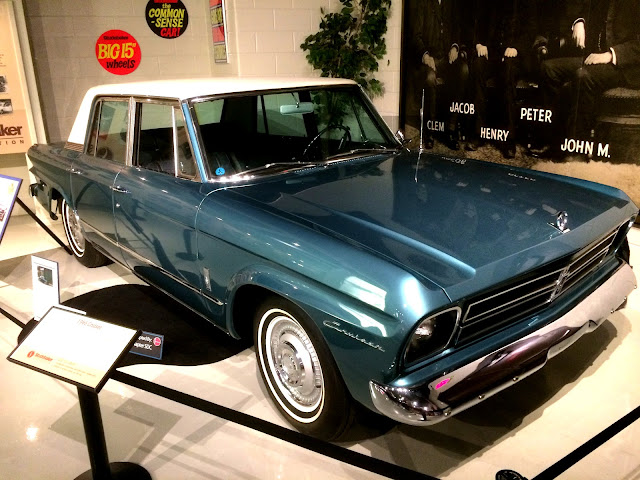 One of the historic homes we viewed in South Bend was Tippecanoe, the residence of Clement Studebaker. We didn't have time for a tour, but we did manage to get this photo of the 30,000 square foot house: 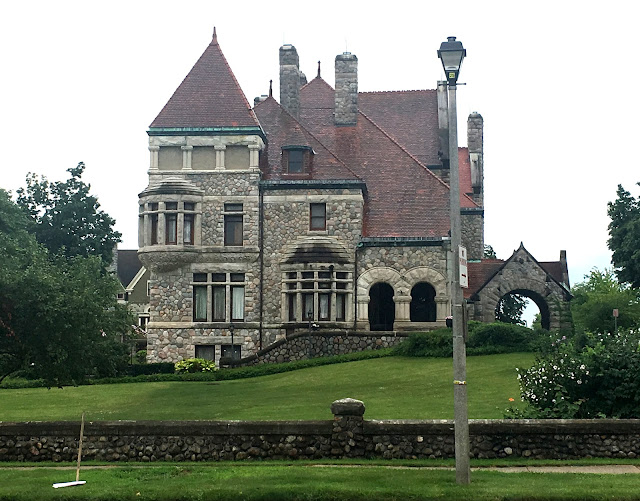 We were able to get a tour of the Oliver Mansion next door to the Studebaker Museum. It was a glorious architectural wonder: 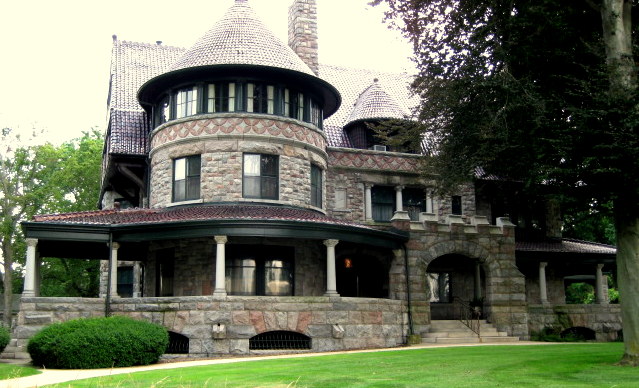 J. D. Oliver, who built the house in the late 1800s, was the son of the inventor of a process to manufacture cast iron plows that had the durability and performance of much more expensive steel plows. Plow sales mushroomed in the fast-developing country and the company eventually diversified into manufacturing tractors and other farm implements. With no income tax then in place, the family accumulated great wealth, and J. D. built this house as a place to raise his four children. Building the house took almost three years, and the family moved in on January 1, 1897.

The home has 38 rooms occupying 12,000 square feet and was the first house in South Bend to be wired for electricity. The only problem was that electricity was very unreliable in 1897, so Oliver built a power plant to serve the house, his factory and other homes of family members; any excess electricity produced he sold to the city. The house was very high-tech for its day, having an intercom, forced-air heat and a central vacuum.

The Olivers and the Studebakers lived on the same street, and some members of the families intermarried and worked in the others' respective companies. Here are some more photos of the house:

One of the reasons I was eager to tour the Oliver house was because of the manner in which it was bequeathed to the historical society. The heirs donated not only the residence but all of the furnishings as well, including the spices in the cupboards and even undergarments in the chests of drawers. The docent giving the tour told us that it took two years for the society to catalog the thousands of artifacts.

With this post, we'll be saying goodbye to northern Indiana for now. It was a very pleasant two-week stay, and there are still things we didn't see, so we will hope to return. That seems the way it is most everywhere we go; there is so much to see and so little time. I think this quotation from Alexander Sattler best describes what motivates us in our current fulltime, nomadic lifestyle: I had rather own little and see the world than to own the world and see little of it. I like this quotation so much that I'm going begin using it as an additional tag line in every post underneath the short prayer of appreciation that you find there.

We will always remember this as the place where we said goodbye to our original tow car, Mae I. So long, little red car; you have served us well, and we hope you find a good home. We are heading west from here, meeting friends in South Dakota. From there, who knows?

I had rather own little and see the world than to own the world and see little of it. --Alexander Sattler