We Took Starlink With Us; How Does It Work?

We've been Starlink customers for about five months now, so when they announced their new portability feature, it was a no-brainer to take it with us to Colorado for the summer. I had read on some Facebook groups that there are some problems when you take the dish away from its home base, but that didn't deter me from signing up for portability at an additional $25 per month.

If you've read this rag for a while, you probably know that we have disconnected our DirectTV satellite and gone to full wi-fi streaming. Before Starlink, this was done via a Verizon unlimited hotspot (which is really not unlimited) and our T-Mobile cell phone hotspots. Now this gives us over 200 gigs of unthrottled data, but who needs the hassle of running up against limits and having to change devices to get wi-fi? Enter Starlink, where you just turn it on and forget it--unlimited lightning-fast data, all the time. There's no need to turn it off; your "home" network is on all the time.

We left the Starlink dish in a belly compartment (it comes with a protective carrying bag) and used the Verizon hotspot during the two-week trip to Colorado. Once we arrived here in Cortez--where we will be for three weeks--I set up the dish and fired up the router. Within seconds, the dish came alive and pointed itself northward. The network came up immediately, and a speed test revealed that the data throughput was somewhat slower than it was at Ranchito Hondo. Even at the slower speed, it was still faster than DSL and the Verizon hotspot. The slower speed was a known factor, as Starlink advertises that its use in portability mode results in a lesser prioritization than that given native users. This was fine with me, as I much prefer the "set it and forget it" nature of a wi-fi network live all the time with no worries about throttling at some point--which is what Verizon does with my hotspot at 100 gigs. We're hanging on to the Verizon hotspot, however; we don't want to be without multiple backups (including the cell phones) when we're not using Starlink.

So, here is a pic of our setup--so easy to do and so easy to move to our next location: 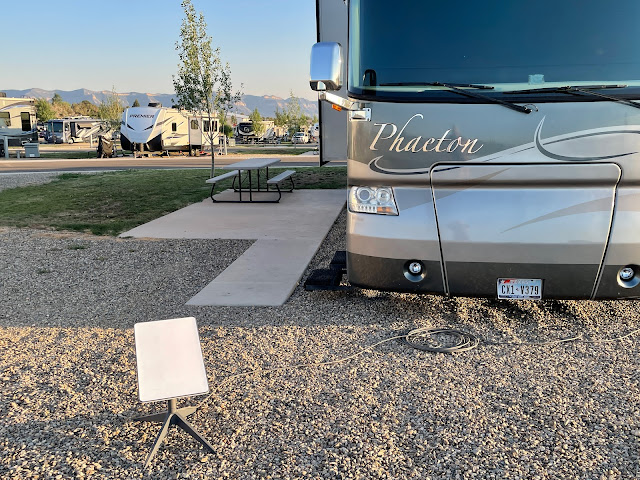