We had just pulled into an RV park in Plainview, Texas after a weekend with our daughter, son-in-law and grandsons in Dallas. I remarked to Sandy, "I have a doggone tickle in my throat." She nodded and disclosed that she, too, had the unmistakable beginnings of a cold. We were both taken aback, as it had been years since we had a cold of any kind, and we couldn't remember the last summer cold either of us had experienced.

Luckily, we had planned for a week's stay at this park while we visited nearby friends, so we thought we would give ourselves a couple of down days, and these sniffles would go away. Alas, it was not to be; each day brought with it more coughing, drainage, fever and a slight breathing restriction. This was anything but a summer cold, we thought. About the time we were becoming concerned as to the nature of our malady, our daughter, Mindy, who is a nurse, called and said she had tested positive for Covid, as had her entire family. She said we likely have Covid ourselves because of our exposure to them in Dallas. This was a shock, because none of them appeared to be ill, except for our oldest grandson, who lost his voice near the end of our visit.

We hadn't even thought about Covid for a long time, as we had been fully vaccinated and boosted.  We assumed, therefore, that we were at relatively low risk, especially since we were also in relatively good health for an older couple. Nevertheless, we hurried to a local emergency care clinic for testing; it was, indeed, Covid. We looked at each other with the realization that we had finally contracted the infamous virus that had been the scourge of the whole world. It was a somewhat sobering moment, but we also knew the lethality of Covid had lessened greatly over time. The doctor gave us a prescription for Paxlovid and told us to come back if our conditions worsened or we had any difficulty in breathing. Once we began the medication, we improved quickly, with only the cough and drainage lingering.

According to the doctor, we were fortunate to have contracted Covid after the virus had mutated many times, rendering it far less dangerous than the original. The downside, according to him, was that the current variant is highly contagious.

We're just sharing this personal experience for your health information and in memory of friends and loved ones who were not so fortunate. We are grateful to God for our good outcome.

At the end of a week in which we felt pretty lousy, our energy had returned to an extent, and we set off for Colorado on schedule.  We wished our friends well until we see them later this summer at our park in Gunnison. Our only stop enroute would be in Edgewood, New Mexico, some 30 miles east of Albuquerque. But first, we had to travel past Earth. No, not the planet...Earth, Texas: 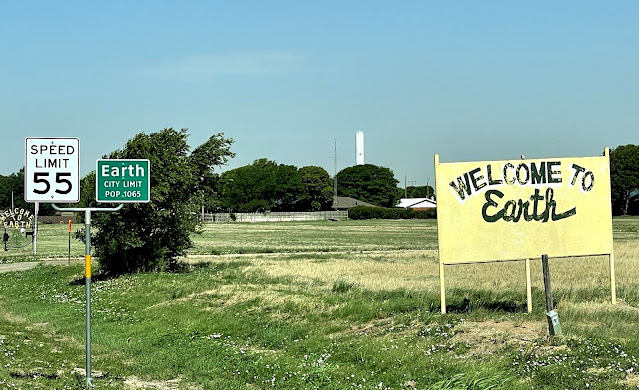 The tiny town of Earth (population around 1,000) is in the panhandle of Texas, not far from the New Mexico border. It was established in 1924 and originally named Tulsa, which the post office rejected. It was then named "Good Earth" due to the good farming land surrounding the area. After a while, the name was shortened to just "Earth." According to the mayor, there are no other towns in the world so named...something I haven't fact checked, but I would like to believe it's true. 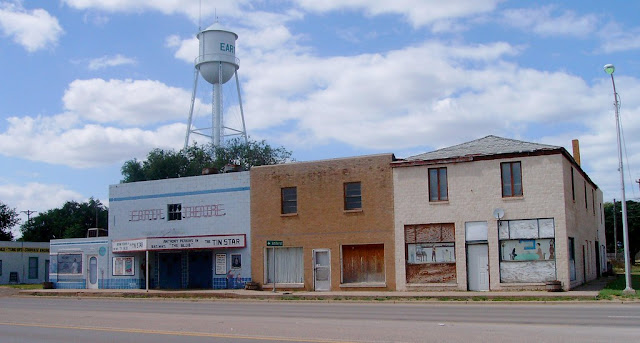 Earth is not what you would call vibrant, but it DOES have a Dairy Queen, so there's that...

Since leaving Plainview, we were plagued with a vicious headwind for the entire 287 miles to Edgewood. I don't even want to know what kind of mileage Phannie was getting, but I'm sure it was less than her usual 7.4 mpg. I tried not to think of the nearly one dollar leaving my bank account for every mile traveled.

We arrived at the Route 66 RV Park, dog-tired and still somewhat weak from our bout with Covid. There was not a sprig of vegetation anywhere in the park--just powder-like sand, mixed with gravel in places to form RV sites. The wind was whipping up dust devils everywhere and, when I stepped outside the coach, my hat blew off, and I was covered with a layer of fine sand. Suddenly, I thought I was in an old foreign-legion movie or something; I expected to see a camel at any moment. It didn't dawn on me until later that I had not recovered fully from Covid, one of the effects of which is diminished lung capacity, and look at what I'm breathing!

Water, I thought; I must have water! I fought my way to where the water hookup should be and, upon brushing the sand away, found that the faucet was located beneath a steel manhole cover about 18 inches below ground level! Now consider what this means for someone who has one bad knee and one fake knee, neither of which is designed for kneeling on gravel and reaching 18 inches below to hook up a water hose. The meme below best describes my thinking at that moment: 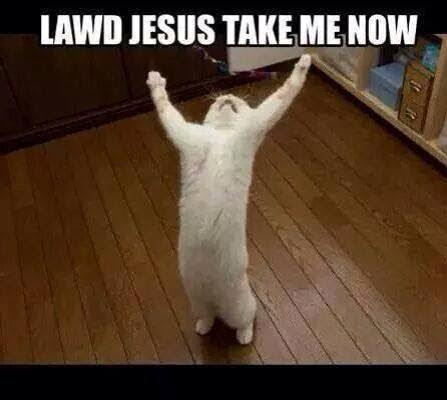 Through the dust storm, I could barely make out the office in the distance. Wondering where my hat was by then, I stumbled to the office, where my windblown countenance visibly frightened the poor girl sitting at the desk. I explained my circumstances and asked if they had a maintenance person who could help me drill for water. "Um, the owner has gone to Albuquerque, but I'll call him," came the answer. Not at all sure how this would help, I thanked her and rode the tailwind back to Phannie. It would have been nice, I thought, if I had included a divining rod when I was preparing to leave Ranchito Hondo. (I wonder who will know what the heck I'm talking about here.)

In a short while, a young fella showed up. (At least that's what I thought the visage was, as I was trying to see through the dust on my eyelids.) I explained the situation, and he quickly hooked up the hose after half his body disappeared through the manhole.

It wasn't long until nightfall, and the wind began to moderate. After a nice shower, we settled in for a short night...we had over 300 miles to go the next day.