This morning, we tried some of the breakfast sausage we bought yesterday at the country butcher shop, and it tasted just as good as it looked. Foodies that we are, we have a lot of fun trying homemade goodies like this from the burgs through which we travel. It's almost always far better than the boring chain store offerings that I mostly detest.

We said goodbye to the Lake Hamilton RV Park and stopped in again at Cajun Boilers to have some more seafood for lunch. We were a little sorry that we couldn't eat six meals a day in Hot Springs. We saw a lot of interesting restaurants that we just didn't have enough time to try.

We pointed the Hornet northward on route 7 and quickly got into the rigors of mountain driving. I had forgotten how much of this highway is comprised of steep grades and switchbacks. The scenery is fabulous, but we could only average about 35 miles per hour for the mountainous leg to Branson, which was less than 200 miles away.

Warning to female readers: The following paragraph is for guys; you'll probably find it more boring that the rest of this pap.

While the Hornet's diesel engine has plenty of power to pull the 10,000-lb. Homer up the steep hills, I often prefer to shift the transmission manually in the mountains, because I have much better control over engine speed, EGT and turbo boost pressure. And a lower gear is essential to control the rig's speed on some of the steep descents, especially the long seven percent grade just south of Harrison. It would be nice to have a jake brake for the engine, but I have been advised by the experts that this doesn't work very well except on the 2006 Dodge diesels or later models. Seeing the value of the jake brake, Dodge designed the new transmissions to accommodate these starting this year. In addition to the extra gauges (EGT and Turbo boost pressure) I had installed on the Hornet, I also installed a transmission oil temperature gauge. On a couple of occasions today going up a long steep grade, I became a bit worried, as the transmission heated up to within ten degrees of the 220-degree maximum. I may need to check into getting an auxiliary transmission oil cooler for future mountain driving. I'm much more comfortable having a good set of engine gauges now, vice the idiot lights. Once a pilot, always a pilot, I guess.

We pulled into Oak Grove RV Park in Branson at about 7:00 p.m. I was exhausted from manhandling this rig through the mountains. This was the first time I really noticed the three thousand pound extra weight difference between Homer I and Homer II. I'm figuring this was about as much mountain driving as I would ever want to do in a day. 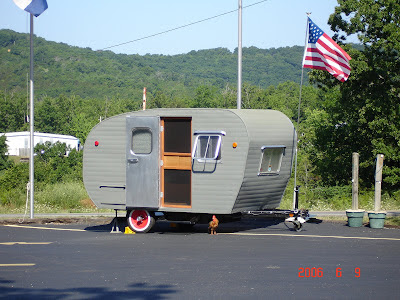 Sandy and I were famished at this point, so we walked to the Fuji Japanese Steak House just next door to the RV park. We were seated next to a charming couple from England, and we had a nice conversation with them while the chef did his obligatory tricks at the grill. The food was okay, but hardly up to the standard set by Kobe Steaks in Dallas for this type of venue. Perhaps for show, the British chap queried the waiter for an obscure brand of English beer which, of course, the restaurant didn't carry. When offered an American beer, he turned up his nose and waved the waiter off, obviously piqued at the idea of having to drink any vile American product. He then offered an unsolicited explanation that the town where he lived in England was home to the brewery having the oldest beer brand in the world, of which he was obviously enamored. He went on to reveal that the brewery had just been bought out by Coors, a sore point for him that he didn't attempt to conceal from us greedy Americans who stole his brewery. I started to point out that if it had not been for a few hundred thousand American beer drinkers in World War II, he might be ordering schnapps and speaking with a German accent. Seeing that I was contemplating such a smart aleck remark, Sandy pinched the tendon on the bottom of my right thigh where it connects onto my knee joint. Thus immobilized by pain, I could muster only a raspy groaning noise. And alas, my remark was lost to history (except as retold here, of course).

Sandy then helped me limp back to Homer, and we enjoyed the rest of the evening, situated as we were in a rather remote and quiet area of the park, nestled among tall shade trees.
Posted by Mike Mills at 11:27:00 PM