During these two days, we just zoned out, sleeping late, seeing shows, going for walks, watching TV, etc. We didn't even encounter anyone weird enough to write about during this time. It was very relaxing. Here are my reviews of the shows we attended:

50s at the Hop - A cute show with talented performers that is always successful in administering our nostalgia fix. 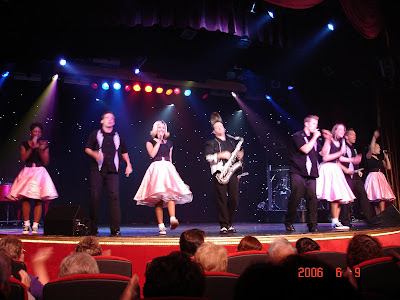 Fifties at the Hop Show

Andy Williams and Glen Campbell - These two stars were appearing together in Andy Williams' theater and, as expected, the show was top notch. Williams obviously spares no expense in surrounding himself with the very best musicians, so his orchestra and backup singers were nothing short of spectacular. This was the most expensive show in Branson at $42.00, but well worth it. Andy, who is in his mid-seventies, still has a strong voice and is able to hit the high notes, but his age has brought about a bit of wobbliness in the higher range that we didn't notice several years ago when we saw his show. I hope he has the good sense to retire before he gets to a point of embarrassment, as Perry Como did in his unfortunate performances near the end.

Frederick Antonio, Piano Virtuoso - This was a dinner show, starring an old guy with an ill-defined European accent who played a variety of piano tunes to a background track. He was just awful. He obviously had little formal training, but had learned a few keyboard licks that, to the indiscriminating ear, might sound impressive, because he hit a lot of keys. Unfortunately, they weren't the right ones. It was painful, painful to hear, and most others apparently thought so, too, as there were only seven people in the audience. This poor guy was a real bomb. Even I could have done better. The only saving grace was that we got our tickets for $11.50, which was half price, and that included a pretty good steak dinner. We slipped out after the meal, which was merciful to our ears and our digestion.

The Titanic Museum - Some entrepreneur has constructed a huge replica of the front third of the Titanic at the corner of highway 76 and Gretna Road! Inside this impressive structure is a museum containing more than 400 artifacts from the original ship. This was very well done, involving a 90-minute self-guided tour of all sorts of vignettes constructed to help visitors get a sense of what it was like on that fateful night in 1912. Of particular interest was the ship's grand staircase, which the builder of the museum had faithfully replicated in its actual size and splendor. This added a good deal of realism to the experience of imagining the opulence of this vessel and the compelling stories of its prominent passengers. 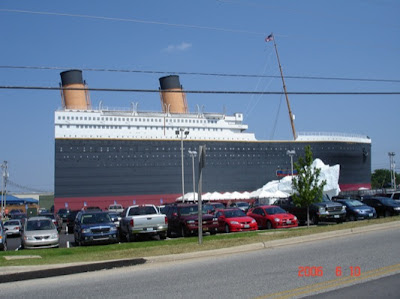 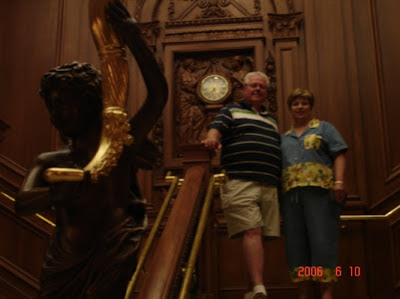 The Duttons - This show has been in Branson for eight years, but we didn't know anything about it and decided to drop in, especially since we were able to get half-price tickets to this show, too. The Duttons are a very talented family of nine who sing and play mostly bluegrass music in an engaging and energetic performance. Now, bluegrass is fine, and a lot of people enjoy it. However, it is one of our least favorite musical styles, and had we known this beforehand, we wouldn't have gone anywhere near the place. We left during the intermission.

We also made a first-time tour of the new Riverbend Center that his just opened in downtown Branson. This place is something else! It's an upscale mall, not enclosed like a conventional one, but constructed as shops on each side of a 1 ½ mile-long promenade along the riverbank. Above the shops are apartments and condos, and it looks for the world like a typical main street in mid-America. There is a large Bass Pro Shop and a Belk store as anchors, and two large hotels, one of them a Hilton, are being built nearby. The project is costing $420 million, and it will definitely put downtown Branson on the map!

One of the curious things about Branson is that we haven't found very many good places to eat, as we define them. There are many restaurants that serve fast food and all-you-can-eat buffets, but we have found the quality of the food to be well beneath our standards which, admittedly, are perhaps unnecessarily lofty. Oriental food is scarce and inferior; the mexican restaurants are a joke. And, since we avoid chain restaurants like the plague, we rarely eat out when we are in Branson. One of the nice things about Homer is that we can whip up a nice meal in the kitchen at a real cost savings. We don't fix anything elaborate, but it's always to our liking. For example, we made a killer chicken chili one night, and we keep on hand a supply of tuna and chicken salad, made just as we like them. We also get deli meats and cheeses and make gourmet sandwiches. We eat a good bit of fresh fruit, and we have a blender to make smoothies. With our nice flat panel TVs, satellite receiver and DVD player, we can have dinner and a movie right there in Homer or watch TV in the bedroom. This RV travel is pretty cushy.
Posted by Mike Mills at 9:30:00 PM