We decided to stay another day in Hot Springs, as we liked the new Lake Hamilton RV park, and the previous day's rain kept us from getting to all the things we wanted to do before we left town. After a morning walk around the RV park, we enjoyed a breakfast of fajita nachos—yes, you heard me right. (We are a little unconventional, foodwise, at times, as most of you know.) Then we lounged around for the rest of the morning, did some e-mailing, and I worked on this journal. We were ready to get out again around noon, so we drove down the street a mile or so to the Cajun Boilers restaurant, situated on a small bay of Lake Hamilton. We noticed this place was always packed when we drove by, and now we know why. The seafood is plentiful and divine. The large fried shrimp platter was fabulous, and there was plenty for Sandy and me to share. The crab claw appetizer was also wonderful. We'll probably be forced to go back to this place before we leave.

We drove up to the Mountain Tower overlooking Hot Springs. This is the highest observation point in the area, as it stands a few hundred feet on top of a mountain near downtown Hot Springs. The view from this was terrific, but Sandy rode up the elevator as a labor of love. She is very claustrophobic in elevators—especially those rising to high elevations and having a window to view outside. This elevator had both features, and Sandy had to sit down to recover from her anxiety attack when she reached the top. Neither she nor I realized how serious her reaction would be, and I'm sure we won't be doing this sort of thing again, now that we know how much difficulty she had this time. As Sandy rested, I moved around the circular observation room where, below the windows, was displayed a timeline-style narrative of Hot Springs history circling the entire outer perimeter of the room. I found this to be just what I needed—not too much, not too little, and with large enough print—to reacquaint me with an overview of the history of the area in the time available. Hot Springs has a rich and interesting history, and I enjoyed this a great deal. The only drawback was a TV screen in the room playing a continuous video loop describing Bill Clinton's early years as a resident of Hot Springs. This was very annoying, but I couldn't reach the TV controls and had to endure this blather for the entire time.

After driving down from the mountain, we parked downtown and toured the old Fordyce bath house, restored by the U. S. Dept. of Interior to its former 1925 glory. 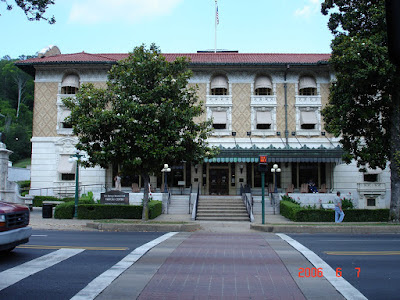 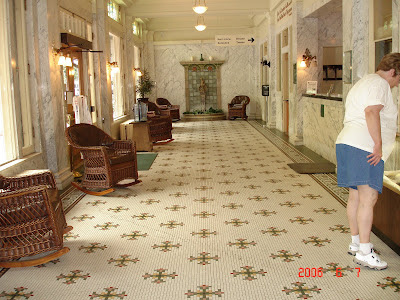 Lobby of the Fordyce

Of particular interest in the Fordyce was the far greater opulence of the men's bathing area compared to the women's bathing room. The men's area was much larger, with long marble benches and an elegant stained glass skylight, underneath which was a statue of Hernando DeSoto. The women's area was small and almost utilitarian by comparison. Ah, those were the days, weren't they, guys? 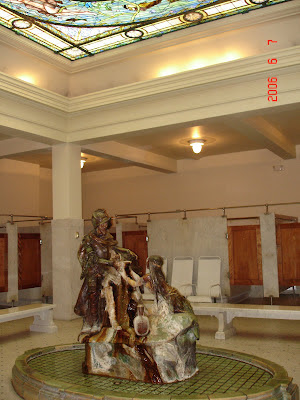 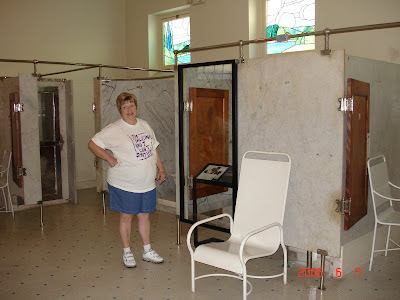 Women's Bathing Room, Not So Opulent

We then walked behind the Fordyce to see one of the 47 hot springs that give the town its name. 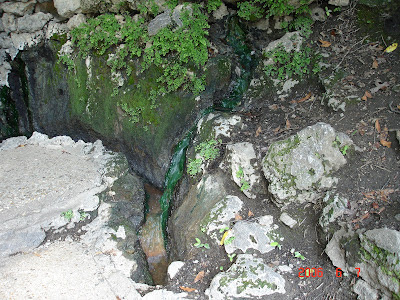 One of the 47 Hot Springs 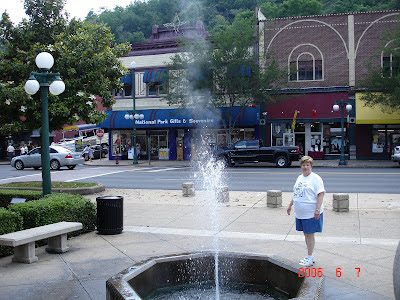 The mineral-infused water has bubbled from this mountain at a steaming 134 degrees since before recorded time. Because bathing in the water was so popular in the late 1800s and early 1900s, the flow from the springs was insufficient at times to supply all the bath houses. Someone had the bright idea that they would dynamite the opening of one of the larger springs, in an effort to increase the flow. This didn't work, but this stunt, among other problems, like the building of too many unsafe ramshackle bath houses, became catalysts for the federal government to step in and regulate the springs, setting the area aside as the first national recreation area and the precursor of Hot Springs National Park. The water coming directly from the spring is quite fit for drinking (after cooling, of course), and a free container filling station is located just off Central Avenue at the southern end of Bath House Row. As we did last trip, we filled a 10-gallon container to use as our drinking water in Homer, as we think the water is very tasty and imagine that it might be of some health benefit due to the minerals contained therein.

By this time, Sandy seemed almost to have recovered from her elevator experience, but she thought that a little shopping spree might be just the ticket to erase any lasting trauma. Not wishing to impede the healing effects that such an adventure would bring, I smiled sweetly and drove to a newish shopping center not far away. At the conclusion of this little diversion, she did indeed seem like her old self again.

Sandy's little shopping trip had such a curative effect that she allowed how her appetite had also now returned. So, we stopped at Facci's, an Italian restaurant on Central Avenue in a junky old house that had been operated by, well, a Mr. Facci, since 1975. The food was rumored to be good, although the proprietor, whom we encountered almost immediately, was sloppily attired in a dirty apron and tennis shoes, wearing his gray unwashed hair in a very long pony tail. I really don't know why Sandy and I seem to run into so many characters like this. I guess everyone else does, too, but it just seems a lot wierder out there than it used to. One thing's for sure, though: This old hippie could cook. Our chicken piccata was very, very good, although there were a few too many capers. The bread and olive-oil based dipping sauce was so good, I almost gnawed into my fingers as I gobbled up the bread.

After dinner, we drove out to Lake Ouachita, another beautiful body of water just a short distance from Hot Springs. We toured a marina and a COE (U. S. Corps of Engineers) RV park that fronted right on the lake. Every available space was taken, but that is understandable, given the inexpensive site rental fees and the picturesque location. I suppose people who live in this area could be jaded by the natural beauty so abundant here, but it would be hard for me to get tired of the Ozarks, I think. On the way back, we stopped at a country butcher shop and bought some breakfast sausage that looked good. By then, darkness had fallen, and it was time to call it a day.
Posted by Mike Mills at 10:23:00 PM