We awoke on top of the mountain to find it raining! It had been so dry in Dallas that we had sort of forgotten what rain was like! The temperature outside showed 65 degrees, so there was no need for air conditioning. We just turned on the exhaust fan (RV equivalent to an attic fan) and enjoyed the cool breeze coming in the windows. Thanks to our Wal-Mart excursion last night, we had bacon and eggs for breakfast, a big improvement from yesterday's Spam debacle. Even though we had satellite TV going, we still felt surprisingly disconnected from everything since we had no internet or e-mail access. Isn't that amazing? I'm embarrassed to admit that we have become such satellite/cell phone/internet/e-mail junkies that we can't go on vacation without all this silly technology. We are what we are, however; we just can't figure out how we got this way.

With the need to get back to civilization in mind, I was determined to pull out of Cloud Nine a day early and move to a park closer to town where we would have wi-fi and not feel like early frontier settlers waiting for an Indian attack. So, we scurried around to break camp, and when I went to the office to tell the little Nazi lady that we were leaving early, she informed me that I would not be getting a refund for the extra night. I told her that that decision would be costly for her, as I would be submitting an unflattering review of her park in RVparkreviews.com (the premier web source for unbiased info about RV parks). She shrugged her shoulders, and I left. But I successfully carried out my threat. (You can read my review at http://rvparkreviews.com.) I can guarantee that will cost her a lot more than the 27 bucks she chose not to refund. We chose Lake Hamilton RV park as our recovery location, and were glad we did. The staff was super friendly, and it was right on the lakefront, close to everything. Not only was it cheaper, but the wi-fi was excellent. 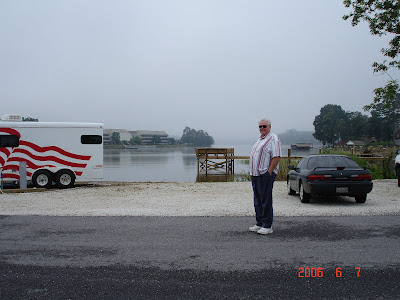 After we got settled into the new digs, we decided to drive around the area and do some sightseeing. This was a good plan, as the clouds and rain showers gave every indication of being with us the entire day. This made for an absolutely delightful temperature that didn't exceed 72 degrees all day, and the showers were spotty enough that it wasn't a problem to get out of the Hornet now and then. We stopped for lunch at McClard's Barbecue, the Hot Springs legend that was closed the last time we came through here on a Monday. The place was mobbed, as usual, and the food was as good as ever. 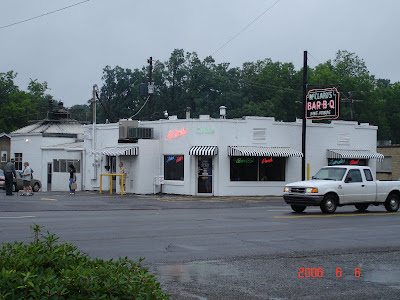 Our sightseeing then took us out to the Galvan Woodland Gardens, maintained by the University of Arkansas on a 210-acre tract on Lake Hamilton. This was well worth the six-dollar admission price, and the lushness of the place was made even more appealing in the cool dampness of the day. After our afternoon of motoring around the area, we went downtown to take in dinner at the Belle Arts restaurant. The food was Italian, and the setting was an elegant dining room with a soaring arched ceiling and a pianist playing easy listening tunes on the grand piano. Unfortunately, the meal was overpriced and disappointing. The shrimp scampi was prepared with a sauce that had tomato in it, which is just not done in reputable Italian restaurants. The garden salad had way too much balsamic vinegar in the dressing, and the cold shrimp and avocado salad was just that—shrimp and avocado—with a highly forgettable dipping sauce. Too bad—the place had a lot of potential, but should be avoided at all costs because of the unimaginative food and high prices.

After dinner, we went next door to a storefront building with a neon sign that advertised it as the Bath House Theater. We had seen a brochure for this attraction when we were at Galvan Gardens, and it billed itself as the "best live show in Arkansas." The offering, according to the brochure, was a family variety show with comedy acts and an orchestra playing popular music from the last eight decades. What's not to like about that? We paid the $13 admission and settled in for what we anticipated would be a Branson-like show. Uh, it wasn't. The orchestra members, who numbered 8 souls, did double duty as the cast players during the skits. The musicians tried valiantly, but there were just not enough of them (only one trumpet player, two trombonists, and no strings) to bring off the big-band numbers they were trying to play. The result was almost comical, in that there was a melody—thanks to the poor lone trumpeter—but two trombones couldn't possibly have added the orchestral depth required for the music that was attempted. The result was a very amateurish sound, no matter how much effort—which was considerable—they put into their performance. The owner of the theater, Tom Wilkins, was the "star" of the show, along with his wife, who was the lead female vocalist, and his daughter, who was also a singer as well as the pianist for the group. As a pianist, she was pretty good, but as a singer—oh my word! Wilkins, his wife and daughter should be banned from singing for life, with the threat of imprisonment if they ever attempt it again. Everything they did was an off-pitch, screeching mess that was just maddening to endure. The comedy skits were lame and poorly executed but, to my astonishment, some of the 50 or so patrons actually applauded what was going on. This led me to believe these poor souls might never have seen a good show before or that they were polite to a fault. Sandy and I sat there for an hour with our mouths open in utter disbelief that enough people had paid to see this artistic holocaust for it to stay in business for years. The only slightly amusing part of the show was Wilkins's portrayal of Elvis's inept imaginary brother, Buford who, according to the story line, was attempting to do a show mimicking the real Elvis. This had some real potential as a skit idea, but it was executed in a bush-league manner. It did, however, keep our interest sufficiently so as to deter us from slashing our wrists before we could escape from the theater during intermission, which we did. If this was, indeed, the "best live show in Arkansas," then I pity Arkansans. The only good thing about this experience is that it gave me fodder for this journal. It was truly more fun to write about than to watch. Hopefully, some reader will take heed and avoid wasting the price of admission to see this travesty. Other than that, I really don't have any strong feelings on the matter.
Posted by Mike Mills at 10:32:00 PM