Big Bend: A Day Off in Alpine!

After burning up the roads every day since leaving on this trip, we needed a break; the old stamina is just not what it used to be sometimes. Sandy fixed a great breakfast and we took our time getting ready for the day. I spent the morning messing with this blog, trying to figure out why I can’t get my photos to upload to Blogger. Desperate, I tried uploading to other sites, and that isn’t working, either. I’ll guess I’ll try again from the desktops at home when I get back. I’ve been looking for an excuse to change to a Mac, and this may be it.

We decided to try yet another restaurant here in Alpine for lunch, and we chose Alicia’s, which had been recommended by the office attendant here at the Lost Alaskan RV Park. I’m happy to report (especially for Ed and Marilyn’s sake, considering their upcoming journey to these parts), the first ‘thumbs-up’ in our quest for good restaurant food.

You’ll have to be prepared to be unimpressed with the exterior of this little place. Alicia’s, at 706 E. Gallego—a short distance south of downtown—is, well, a dump. But the food made us forget the ambiance entirely. Sandy had a killer hamburger, just the way we like it, with buns browned on the griddle while the meat cooks and a big, hand-formed and perfectly cooked meat patty hanging out around the edges. The French fries were fresh and hand-cut, still sizzling when they arrived at our table. I had a Mexican combo plate, which was all good, but it included a serving of chili verde that was to die for. (FYI, the Mexican dishes are a little spicy here; they haven't been tamed for the gringo palate.) These folks know how to cook, and we feel relieved that we have finally found a decent food emporium. 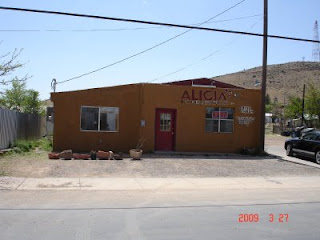 
We strolled around downtown after lunch. In one of the shops, Sandy found a pair of earrings she liked and left for me the financial transaction, a chore for which I have had more than a little practice.

After a while we drove back to Homer, where the little woman took a nap and I read some of the blogs we follow. The longer we find ourselves in Alpine, the more I think I may have judged it a bit prematurely in a previous post. The friendliness of the local residents is really contagious, and this has the effect of suppressing my initial impression that the place was dull and unremarkable. I’m very happy we chose Alpine as a base while we toured the Big Bend area. Also, having checked out the other RV parks here, we are convinced the Lost Alaskan is the best by far we could have chosen.

Reading Ed and Marilyn’s blog, I picked up on a question Ed had about cell phone service. Well, surprisingly enough, almost every town we visited has cellular service. Even tiny Terlingua had a good signal! That is not to say that the coverage extended too far beyond the city limits, mind you. Obviously, you won’t have any capability at all when you’re out in the desert a hundred miles from nowhere.

Another thing occurred to me about traveling the river road (highway 170 between Presidio and Terlingua) described in the previous post. To ensure the best light for photography, you probably would want to keep the sun behind you. With that in mind, I would recommend starting a morning trip from Terlingua or an afternoon trip from Presidio. On the other hand, if you wanted to skip Presidio altogether (which is not a bad idea), a better choice would be to start the journey from Terlingua and then turn around and come back when you run out of scenery. That way, you would see a completely different visual treat each way. That is undoubtedly what we would do if we had it to do over again.

Oh, and one more thing: You can get diesel fuel in both Presidio and Terlingua.

After Sandy’s nap, we motored downtown to the Museum of the Big Bend on the Sul Ross University campus. There were some fairly decent exhibits, but the big attraction for us was an art exhibit in the north wing of the museum. Shown there (for sale) was some outstanding work of some really exceptional western artists. The pieces were mostly out of our price range, but the talent represented in this exhibit was just incredible. We thought it was well worth the trip. Frankly, the museum was not what you would call a must-see, but if you have any appreciation for art—especially western art—this stop would be worthwhile.

Since it was nearing dinnertime, we elected to try yet another new restaurant we found here in Alpine. This was Texas Fusion, at 200 W. Murphy, and yes, it was another dump. But, like Alicia’s, it was a keeper! Sandy ordered steak fingers, and I had a barbeque beef sandwich. The steak fingers were not the usual pre-breaded, pre-formed frozen planks that could be alternately used as leveling blocks for your fifth wheel. These were hand-cut pieces of quality steak, hand-battered and fried for each order. Served with cream gravy and French fries, these were divine. My sandwich was also good, as the plenteous brisket was obviously smoked for today and not left over from a previous day, as was the case with Alpine City Limits. So, another thumbs-up for Texas Fusion! Great cooking and cheap prices are what we like.

I also found a local radio station at 1240 AM that plays music I like—you know, the old timeless standards, big band numbers, show tunes and ballads that the younger generation despises? Frankly, I stopped listening to popular music about 30 years ago because I think songs should have a melody, and I haven’t heard many of those since about 1975. Frankly, I don’t think I’ve missed a thing.

After watching a little TV, we talked on the phone to our daughter, Mindy, who is in College Station, Texas, then turned in for the night. We had to be ready for the next day, when we would actually visit Big Bend National Park for the first time.
Posted by Mike Mills at 12:59:00 AM