On the Road to Big Bend: Brownwood, Texas

Yes, I know how long it has been since the last post. I have some excuses, however, but these involve mostly personal and work-related matters, and a travelogue is no place to drone on and on about those things. In fact, we have made a couple of trips in Homer that we didn’t record for posterity, mostly because they were unremarkable. We went back to Branson last fall and to New Orleans in February. I have already written about Branson a good bit, and the New Orleans trip was work-related, so I was too bummed out to write about that one. Retirement can’t come too soon; that will definitely improve my state of mind.

Okay, I didn’t say these were good excuses, but they’ll have to do. I find myself so envious of fulltimers like Ed and Marilyn and Gordon and Juanita, whose escape from the work world allows them enough carefree time to post daily to their journals.

After almost a year in the new house, we can report that it is just about perfect for us at this stage of our lives. It has exceeded our expectations in every way, especially in its energy efficiency. Although this house is only about 40 percent smaller than our old one, our energy bills have shrunk by 60-75 percent, even though we’re paying higher rates now. I’m still pinching myself at having had the uncharacteristically good foresight to spend the extra money during construction for the energy-saving features. They are really going to pay off bigtime.

We decided to go to the Big Bend area of Texas because it is a “bucket list” item of mine. Having lived lo, these many years as a native Texan and having not seen that part of my great state was, well, embarrassing. Now Sandy wasn’t particularly excited about this destination, mainly because she doesn’t care much for desolate areas and she is deathly afraid of snakes. She had heard a few snake stories from friends who had visited the Big Bend, and she had built up in her mind some pretty fanciful ideas about the supposed plethora of these creatures that would be awaiting her at every step outside. Even so, she gamely agreed to accompany me and, knowing the depth of her phobia, I marveled at her willingness to accept what she believed to be certain peril just to be with me. Gotta love this gal.

As usual, we were late getting away from the house. We’ve found that we really need a full day without other obligations to prepare for a trip departure, and that is difficult to do most of the time due to my work obligations, which was the case this time. We had intended to make San Angelo our first stop en route. At 250 miles, that is about as far as we like to travel in a day. The late departure didn’t permit it, however, so we settled for Brownwood as the first night’s stopover.

Neither of us had visited Brownwood before, so we really had no idea what to expect. We already knew, through RVParkReviews.com that there was only one RV park in town, the Shady Oaks, and we found it to be pretty much as advertised. Arriving late on a Saturday, the office was closed, but we selected a spot with 50 amp service and left payment in a mail slot on the front door. The frontage of this park is within a few feet of a busy highway, and it was incredibly noisy. Frankly, I wouldn’t want to stay there any longer than I had to.

Soon after dropping Homer at Shady Oaks, we went back into town for dinner at Underwood’s Cafeteria, easily the most significant eatery in Brownwood. This barbecue place has been around since the fifties and had a number of clones in other Texas cities. I don’t think many remain, however. There was a fairly long line of patrons awaiting their turn at the buffet, and we were somewhat surprised to notice that most were having chicken fried steak as an entree. Sandy chose fried chicken, and I had a “smoked steak” sandwich. We shared a bit and determined that the entrees were pretty decent. The smoked steak was quite unusual. From the looks of it, they had placed a sirloin or rib eye steak in their smoker for a very long time, as it was just falling apart. The smoky flavor was quite good, as was the barbecue sauce, and I wouldn’t mind trying the ribs and sausage next time. The side dishes were quite forgettable, but the dessert cobblers…oh, my stars! At the end of the serving line set three huge pans containing peach, cherry and apple cobblers, and Sandy and I both agreed these were the best we had ever eaten anywhere. These were hot, crusty marvels with just the right ratio of dumplings to fruit and the perfect degree of sweetness. If it wouldn’t have made such a scene, I would have taken all three pans out to the truck and bathed in whatever drippings didn’t make it into my mouth! 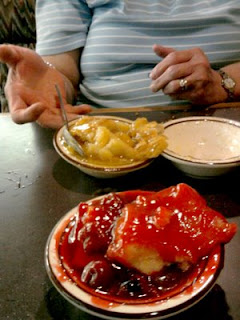 Being on a sugar high now, we decided to drive around town a bit. We saw a sign that pointed to the historic downtown area, so we opted to go check it out. By now, it was dark, and I wasn’t quite prepared for what awaited us. The downtown area was probably the most lifeless, gloomy place I have ever seen. Although many of the buildings appeared to be occupied by businesses, no people could be seen anywhere along the dark, narrow streets! It was a moonless night, and the only thing keeping the darkness at bay were some incredibly glaring mercury vapor lamps that actually increased the spookiness of the place. It looked, for all the world, like a sci-fi horror movie set where all the citizens had either been abducted or evacuated in preparation for the arrival of a giant squid or something. I’m sure it gives a much better daytime appearance, but the night visage was truly disturbing.

On a positive note, all the people we met were unfailingly friendly, and that sort of made up for the downer of our visit to the downtown area.

Our tummies full, we returned to Homer to bed down for the night, eager to see what tomorrow would bring.
Posted by Mike Mills at 7:19:00 AM