This day was devoted to a day-long road trip to traverse highway 170 between Presidio and Terlingua along the Rio Grande. We had read that this was one of the ten most scenic drives in the U. S., and we wanted to see for ourselves. This required the excursion of a 250-mile triangle from Alpine through Marfa to Presidio, where highway 170 begins its journey following the river southeastward. The drive to Presidio was along U. S. 67 which, as we have come to expect for the roads in this region, in excellent condition with little traffic. The weather was clear, and the hundred-mile visibility allowed unimpeded views of the vast desert vistas ringed with mountains tinted in blue, purple and plum colors. I had the Hornet’s cruise control set on 75 (the speed limit in most of west Texas) and the trusty Cummins diesel hummed along contentedly at 2,100 rpm, taking the occasional hill with only a slight increase in EGT. (Jet pilots and diesel drivers with the appropriate engine gauges will know what that is.) A road trip just doesn’t get much better than this, I thought, as I beheld God’s creation before me. Speaking of topping hills, I was reminded of my days flying airliners over areas such as this in clear weather. The enormity of the landscape viewed from the top of a mountain was not unlike the visual impression from the cockpit seven miles high. It was already a wonderful drive, and I didn’t even realize then how much better it would get.

As we rolled into Presidio, I wasn’t quite prepared for the impression I got that I had already left the U. S. and arrived in Mexico. I had always heard Presidio mentioned on the TV weathercasts as having record high temperatures during the summer, and I had expected a heavily Mexican influence due to its location on the border. Well, the outside temperature on the Hornet’s display read 93 degrees, and it is only March! I wouldn’t want to be here in July or August, that’s for sure. But the more striking element of the city is that we thought we were driving in Mexico. The houses and buildings are largely ramshackle affairs painted bright colors of turquoise, pink and yellow, and if there was any zoning in the city, it was largely ignored. While the road signage was in English, almost all the signs on businesses were in Spanish only. We stopped at a local grocery store to get some fruit, and the signs in the vegetable and fruit section were in Spanish. All the conversations we overheard were also in Spanish, as was the background music. Driving through some narrow streets with junky cars around, I really thought I had taken a wrong turn and had accidentally left the U. S. I actually had to audibly tell myself that I was being illogical—I couldn’t just drive into Mexico without going through a guarded customs entry point or crossing the Rio Grande! With this in mind, I regained enough mental stability to find my way to F. M. 170. We didn’t stop for food or water, probably because I still had the irrational subconscious thought that we might get Montezuma’s revenge. So was our impression of Presidio, which actually should be worthy of some respect, as it is billed as the oldest continuous human settlement in the U. S. Maybe so, but I still wouldn’t want to live there.

Soon after turning onto highway 170, we saw a flashing road sign that announced a detour six miles ahead and that there was no through traffic allowed. I had already turned around to go back to Alpine when Sandy suggested that I get clarification of the sign. What a good idea! Nearby we spotted an equipment depot and office of the Texas Dept. of Transportation, so I pulled in there to ask about the sign. They knew about the sign and said that I was not the first motorist to ask about it. They told me the sign was misleading, because through traffic was indeed allowed, although via a 1.8 mile detour over a dirt road that was wide enough for two-way traffic. Great! We were off, and found the detour exactly as advertised. The posted speed limit for the short dirt leg was 20 mph, and I certainly didn’t exceed that, as the Hornet’s stiff suspension didn’t exactly absorb the rub board effect of the rocky detour. We also left a cloud of white dust, even at the slow speed, that I knew must have choked the three motorcyclists following us. 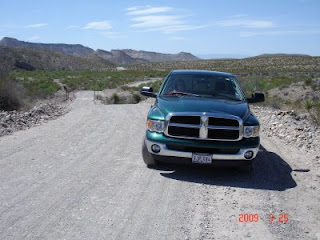 
Back on the pavement, we found highway 170 to be a very good road—not quite as smooth as the U. S. highways we had been traveling, but plenty nice. We didn’t see a single pothole or even any evidence of one that had been filled. This was amazingly better than we expected.

The first twenty miles or so after leaving Presidio were really not much to look at, scenery-wise. We could see some mountains in the distance on the Mexican side, but highway 170 at this point involved driving up and down over a series of dunes that looked as though they may have been deposited there in the eddies of an epic flood eons ago. 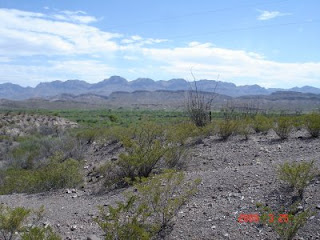 Dunes in the foreground, mountains in the distance on the Mexican side


After leaving this area, however, our visual sensations were increasingly rewarded, as rounding every curve and topping every hill revealed a grander and grander view of some of the most outrageously beautiful terrain we had ever seen!
The Rio Grande was flowing rapidly on the right below us, and the water a clear aqua color—not the muddy stream we had expected. Arising from its banks were huge mountains on the Mexican side and giant monoliths and escarpments on the U. S. side. The sheer rock faces were not unlike smaller versions of El Capitan in Yosemite, except much more colorful. The variety of the rock layers and formations cut by the Rio Grande revealed a geologist’s paradise. The earth’s carcass had been opened up to reveal every texture imaginable and every color in the spectrum, complete with hoodoos and outcrops of countless strange rocks, smoothed and shaped into both amusing and grotesque figures through millennia of erosion. Adding to the show was the desert backdrop itself, serving much like the skirt at the bottom of a beautiful Christmas tree. It was composed not so much of sand, but of pebbles, rocks and boulders of every size, festooned not only with the ubiquitous prickly pear cacti, but with dozens of other varieties of cacti and succulents, some of which were blooming in colors that were almost alarmingly intense. (I took lots of photos, but they don’t begin to do justice to what we saw, due to the limitations of my camera and its operator.) A photography buff would be in absolute heaven here. (Gordon, I’m thinking of you.) There was no dirt, or mud, or dust to detract from the order and cleanliness of the desert artistry. It looked for the world like it had all been professionally landscaped (and I suppose, in a way, that it had, by the great Gardener Himself). Sandy and I were completely mesmerized and totally amazed that such a beautiful place existed in my very own home state, and we didn’t even know it! It certainly lived up to its billing as one of the most scenic drives in the country. 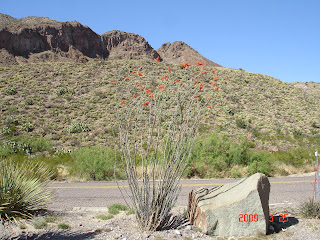 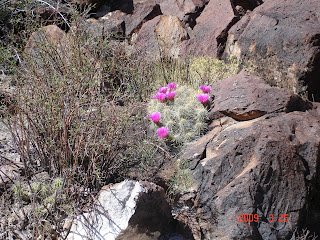 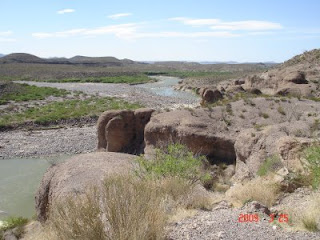 View of Rio Grand at beginning of very scenic area 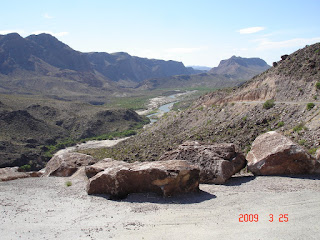 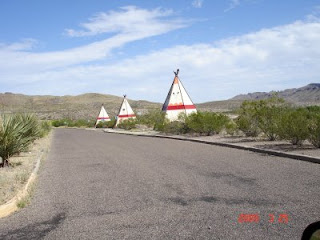 
We drove through Lajitas and spent a little time at the upscale resort there. This was a very unusual and quaint place, complete with a shopping area that mimicked a frontier town in the old west, and we vowed to come back and investigate further. 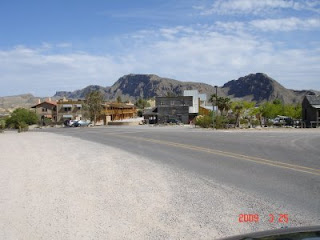 Lajitas From a Distance 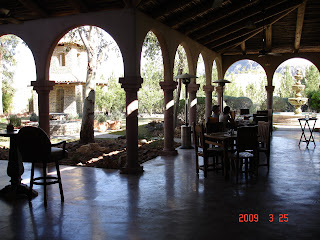 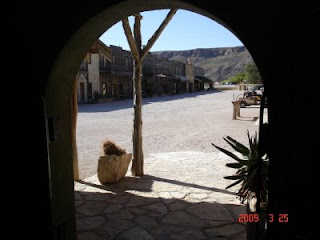 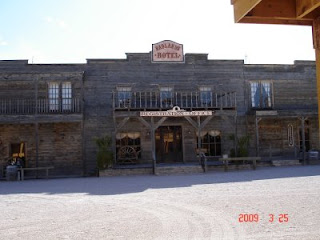 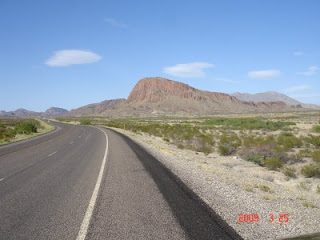 Highway 170 ended for us at Terlingua, the site of the famous chili cookoff and home to a few eccentric types, including what appeared to be a small colony of hippie dropouts from the sixties. There were a few outdoor cottage businesses along the highway, one of which even included a brightly-painted old rusting school bus with flowers painted on the exterior—something you might have seen, say, at Woodstock. (Memo to these folks: It’s over; let it go.) A hand-painted sign at one of these junky places advertised ‘cosmic hamburgers’ but we really didn’t have much motivation to stop and find out why they were cosmic.

The last 86-mile leg up state highway 118 from Terlingua back to Alpine was just as nice as the earlier drive from Alpine to Presidio. The unlimited visibility allowed us to enjoy the grandeur of the mountains, mesas and buttes from very long distances as we approached them on the nearly empty highway. While this was admittedly a long day trip, it didn’t seem so because there was so much to see.

Upon returning to Alpine, we had dinner at the forgettable Oriental Express, which I wrote about in the Alpine post a couple of days ago.

After dark, we drove up highway 118 north of our RV park, pulled off on a deserted side road and did some stargazing. With the high elevation and clear, moonless skies, we could see the breathtaking panoply of countless stars, planets and constellations, as if we were in a planetarium. The temperature was perfect—only a light jacket was needed—and the wind dead calm. It reminded us of how infinitesimally insignificant we are in the whole of the universe, yet how important we are to the Creator.

The only interruption of the utter quiet was a nearby cow, who suddenly was clearly annoyed by something and began voicing her disapproval. We laughed, as it was so predictable for us that such a meaningful moment would be accompanied by something as humorously incongruent as a mooing cow.

Bessie calmed down after a few minutes, and we lingered a little longer. Orion was just to the west of overhead, and we thought we could almost reach out and touch his shoulder. It’s not often that circumstances align so as to allow us humans to pause and behold such a show, and it didn’t cost a penny!
Posted by Mike Mills at 9:36:00 AM