On the Road to Big Bend: San Angelo, Texas

Leaving Brownwood behind, I’m feeling a little remorse for having pilloried it so badly in my last post. One of the unfortunate aspects of recounting our impressions of a town or city from a single overnight stay is that the reader (and the writer, for that matter) gleans little about the true nature or history of the place. I’m sure Brownwood has much to be proud of, and such a superficial sampling as mine does not do it justice.

Nevertheless, first impressions are what they are, and nonetheless valid, I think. The decline of Brownwood’s downtown area is a malady shared by many, many other cities, and I’m confident the local politicos are doing all they can to revitalize it. Unfortunately, their job will be more difficult in this case because of the narrow, labyrinthine downtown streets and the displacement of the area from the main thoroughfare, U. S. Highway 67/84. And whoever came up with the idea of adding the harsh mercury vapor street lights certainly didn’t help the effort.

Crossing the Colorado River just west of Brownwood, it was easy to see that the city’s founders chose a fine place for a settlement on the banks of this beautiful waterway. A steep hill west of the river undoubtedly offers some protection from the wild west Texas winds that are often prevalent this time of year.

Highway 67 gradually climbed a bit with the rising terrain as we headed toward San Angelo, and the vistas became wider and wider as trees became very scarce, revealing the vast expanse of mesquite-studded open land with the highway ribbon unrolled in front of us. There was little traffic, and the highway shoulders were plenty wide enough for us to pull over when the occasional vehicle approached from behind. We remembered a mileage sign back on I-20 west of Weatherford that jolted us with the announcement that El Paso was 545 miles ahead! We tend to forget how large Texas really is.

We rolled through a number of tiny burgs and a couple of towns such as Santa Anna and Ballinger that actually had a town center and a fair amount of activity on this, a Sunday. We stopped for lunch at Alejandra’s Mexican and American Restaurant in Ballinger. The food was pretty good, although unnecessarily pricey, we thought. The building on the square housing the restaurant was quite old, and this added to the ambiance of the place. One curiosity was that the proprietors elected to locate the restrooms in a separate small metal building outside the rear entrance to the building. The walkway to the building wasn’t covered, so patrons would certainly get wet when it rains. It reminded me ever so much of an outhouse. Not that I ever lived at a place with an outhouse, mind you, but I have used one on a couple of occasions. (Wait a minute; it occurs to me that this is probably more information than you need, and I’m even a little unsure of how I got to this point in my narrative. Let’s move on.)

Across the street was the Runnels County courthouse, which, unlike many charming small-town Texas courthouses, had a somewhat unfortunate deficit in architectural appeal. 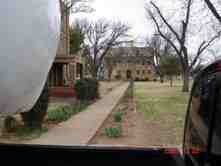 
Rolling again, the mesquite gave way to farmland as we approached San Angelo, which we found a bit surprising, given the scarcity of rainfall in the area. They must have a good aquifer for a water source.

We could easily have omitted the stop in San Angelo because of the relatively short leg from Brownwood, but I was determined to have a meal at Zentner’s Daughter Steakhouse, a restaurant so good that I still remembered it from 25 years ago when San Angelo was a layover point for a commuter airline where I was employed as a pilot back then. (We are such foodies, it’s just sinful, I’m afraid.) So, we settled into the Spring Creek Marina and RV Park, on the shore of Lake Nasworthy just south of the city. This was a very nice park with gravel roads, wide spaces and long pull-throughs. Almost all the spaces were full, which surprised us a bit. The economy doesn’t seem to be keeping RVer’s at home all that much. 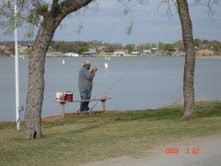 It was with great anticipation that we arrived at Zentner’s. Their specialty is, of course, steaks—large ones that have been cooked in garlic butter on a flat top griddle rather than grilled over charcoal grill or a wood fire.

Unfortunately—and to my complete anguish—the meal was a bomb from the beginning. The salad dressing was (shudder) bottled ranch! This would normally be enough for me to slip into a storage room and begin setting the place on fire, but I hoped this would be just someone’s bad idea, and that all else would be okay. It wasn’t to be. Neither my steak nor Sandy’s was cooked as we had ordered it, and they were nothing like the fabulous juicy versions that I had remembered. For one thing, they were too thick for stovetop cooking and were, therefore, much too rare. In order to get a steak with a hot pink center, a thick steak would have to stay on the griddle so long that the garlic would be burned and bitter. Much of my steak was tough and sinewy, and I’m sure that John Zentner was rolling over in his grave at the travesty being done to his reputation here. The only acceptable food item was the french fries, which were fresh cut and quite good. We tried to salvage something else by sharing a slice of Italian cream cake, but the piece we were served was dry and crumbly, obviously not baked at a time within recent memory. It was hard to believe that we would now be forced to rate this a TAGL restaurant. (Take A Good Look, cause we ain’t comin’ back.)

After stopping at Wal-Mart for a few things (looks like we, too, are contributing to the decline of downtowns), we dragged our disappointment back to Homer and watched a movie, “Pride and Prejudice,” based on the Jane Austen novel written in the late 1700s. It would have to be classified as a “chick flick,” as Sandy especially loved it, but I’ll have to admit it was very well done with great acting.

I’m already plotting that on the return trip, I’m going to try the Lowake Steak House, located out in the middle of nowhere just east of San Angelo. This was John Zentner’s original restaurant, and I want to see if that place, too, has been corrupted.