On the Road to Big Bend: Alpine, Texas

The trip from San Angelo to Alpine proved to be about a six-hour drive through some of Texas’ least attractive topography. We saw a lot of oil well pumps sticking up out of the scrubby vegetation for a hundred miles west of San Angelo, so the owners of that land probably think those parcels are quite beautiful when their royalty checks arrive.

The only towns of any size we traversed were Big Lake (population about 2,500) and Fort Stockton. Approaching Fort Stockton and beyond, the grand vistas really opened up in the sparkling clear air. The mountains near Alpine were clearly visible from a hundred miles away. Before we departed on this trip, we had ordered a couple of books, Roadside Geology of Texas and Roadside History of Texas, and these have proved very interesting companion reading during our journey. For example, we learned that the large mountains at the intersection of U. S. 90 and U. S. 67 east of Alpine are part of the Permian limestone uplift and much different from and older (by hundreds of millions of years) than those like the well-known Ranger Mountain and the Twin Sisters, which are part of the Presidio volcanic field west of Alpine. The geology book contains descriptions and photographs of many unusual formations clearly visible from the highways. If you have any interest in the history and geology associated with Texas travel, I highly recommend these books for your RVing library.

While I’m on the subject of history, readers may note that I don’t tend to include lengthy historical narratives when writing about the places we visit. The reason for this is simple: This blog is not meant to be a history textbook. While I love history and historic places, I find blogs that present a lot of historical detail a trifle boring, frankly. With the advent of the internet, I can find, with a few mouse clicks, as much history as I desire about a place. This blog is about impressions—what a traveler might see through our eyes and experience through our reaction. We humans are always more interested in what other humans do, think and feel. This helps readers imagine they are living the experience themselves through the story—even though the story may be simple or the experience mundane. Writers who understand this will always favor the readers by engaging them on a personal level, thereby meriting their readership.

Because towns of any size are far apart in this area, I highly recommend keeping your diesel supply a little heavier than usual. I really wish I had an aux tank for areas like this. (This reminds me of my flying days; pilots generally think the only time they have too much fuel on board is when their aircraft is on fire.)

Our park of choice in Alpine was the Lost Alaskan RV Park. This is a well-run and clean facility near the Alpine airport with fairly level pull-through spaces and full hookups, including 50 amp. The park staffers were friendly, and a caretaker came by when we parked to see that we had everything we needed. The only downer was that all the formerly gravel roads in the park are being paved, and the graders and rollers were a little noisy during the daytime. Around the first part of April, the paving will be complete and will really be a nice feature for RVers. There isn’t any park cable, but we really didn’t need it with our DirecTV satellite and the automatic TracVision antenna. (We’re still tickled with this system; it was worth every dime of the investment, in my view.) We were having a bit of trouble with the park wi-fi, however. The signal was a trifle weak, so we just abandoned that in favor of the AT&T aircard, which worked well for our internet connection. 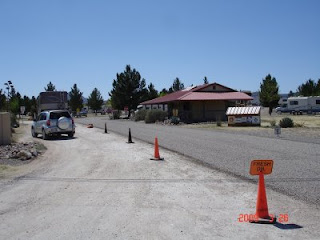 We have to confess to being a bit disappointed with our initial observation of Alpine. It is surrounded by fairly low mountains, but no one could confuse these hills with the majestic European Alps, from which the town gets its name. And, we were expecting a degree of quaintness, but this was not always the case. South of the downtown main drag, U. S. 90, there was a surprising degree of rundown and unappealing houses, buildings and other structures. To the north and west, the residential areas were much more well-kept and somewhat more prosperous-looking.

The elevation—nearly 5,000 feet—makes for a fine outdoor climate. Although the temperature was around 85 degrees during the day, the nights were very cool—between 40 and 50. We definitely had to turn on the heater in the early mornings. I think this might be a healthy climate, too. I seem to be relatively free of the allergy and sinus problems that chronically plague me back in the Dallas/Fort Worth area. In fact, the attendant who checked me in at the Lost Alaskan RV Park told me that she had moved to Alpine from Euless (a stone’s throw from where we live near Fort Worth) to escape her respiratory problems.

Sul Ross University has a larger-than-expected presence on the eastern outskirts of the city. The buildings are very nice and modern-looking, and we understand the school has excellent programs in agricultural and animal science. (I hadn’t realized that Sul Ross, the university’s namesake, was a former governor of Texas.) 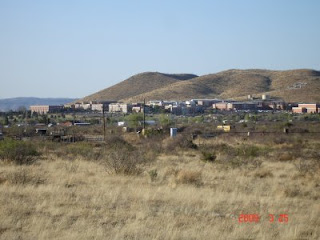 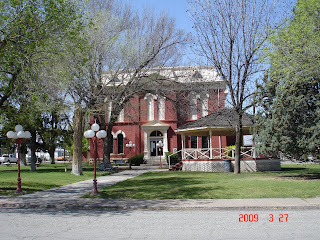 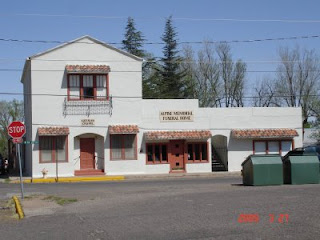 
One curiosity expressed by Sandy was where the students hang out when they’re not in class. There is no movie theater, no mall, no Wal-Mart (perhaps a good thing, in Alpine’s case), and few fast-food joints. We found a McDonald’s, a Subway, a Sonic and a Dairy Queen, but that’s about it for fast food. There are a couple of pizza places, including a Pizza Hut, but no other chain restaurants of any kind. (Not that it mattered; we usually avoid these.) We figured the college students must all get good grades, because there’s little in Alpine to distract them from their studies.

We had dinner at the Longhorn Steak House just down the road from our RV park on highway 118. It was absolutely insipid. The owners should be flogged for serving what they thought passed for food. We simply couldn’t eat it and left hungry. Nearer to downtown on the same highway was the Reata restaurant, redone from an old house and serving upscale western cuisine, but the menu was rather ridiculously expensive. Perhaps for this reason, the restaurant was also relatively empty. I guess price shouldn’t be such an issue, because we can certainly afford a nice meal, but it just galls me to pay thirty dollars for a steak in a restaurant about which I know nothing, especially when all the side dishes are priced extra. After reading the menu posted outside and determining that our meal would have cost the better part of a hundred bucks, we elected to look elsewhere. Perhaps the food was good, but this was Alpine, Texas, not New York City. The owners need to return to earth.

We drove a few blocks to Alexander’s Grill, a Mexican restaurant. Only one other couple was occupying a table, but no one came to seat us. We noticed an employee on the phone nearby, but he appeared clearly annoyed that we had come in, so we obliged him and left. I continue to be amazed at how many restaurants are poorly run; it’s no wonder their failure rate is so high.

We stopped by the local market and picked up a few grocery items, then we returned to Homer, where we had a couple of hot dogs. We were tired after the day’s journey, and we knew we would have a full day coming up, so we retired early, anticipating a good night’s sleep.

Within a day or two later, we tried two more restaurants—Alpine City Limits, appropriately located near the western city limits, and the Oriental Express next door. ACL was a newer restaurant, well-appointed, with an eclectic, moderately-priced menu. Service was fast, friendly and attentive. I ordered fajitas, and Sandy ordered a barbecue beef sandwich with cottage fries. Let’s just say the food was edible, but definitely not memorable. The fajitas had been warmed up from being left over, and Sandy’s sandwich was very dry. It tasted as if it had been warmed up from leftovers as well. The Oriental Express was run by a very serious gentleman of oriental descent, and his daughter was performing waitress duties. We ordered lemon chicken and a vegetable plate, and these, too, were just barely mediocre. The waitress never came back to our table after delivering the food, so I had to get up and search around for things we needed. I hasten to report that her tip was reflective of her indifference.
Posted by Mike Mills at 10:25:00 AM