It was a beastly drive to Durango from Clovis--some eleven hours to travel the 430 miles, including fairly long stops for fuel and lunch and another shorter stop to make a sandwich to eat while we drove.  Lucille’s computer showed 12.9 mpg, which I thought was quite respectable.  I’ve paid between $2.79 and $3.28 per gallon for diesel, usually around $3.08 in this area.


We hate driving such long distances but, we were behind schedule, and my days off are not yet unlimited, like you lucky retirees!  Grrrrr.  The journey was unremarkable, but Sandy’s knee was beginning to bother her due to the long sitting spells that deprived her of the movement she needs for optimizing the healing process. We shouldn’t have any more of these long driving days; I’m trying to keep the legs below 300 miles.


Bubba met us at Lightner Creek Campground in Durango around 10:00 p.m., and boy, was it dark—country dark!  We didn’t even attempt to unhook Homer from Lucille, because setting up in the dark is not only a struggle, but it’s noisy, and the other campers don’t appreciate all that racket so late in the evening.  We just hooked up electricity and water and went to bed, dog tired.  We would finish setting up in the morning.


We awoke to find ourselves in a very nice campground that followed the banks of Lightner Creek, a clear, gurgling stream that flows down a narrow mountain valley about five miles west of Durango.  The place is full this July 4th weekend, and we roamed around until we found Bubba and his crew. 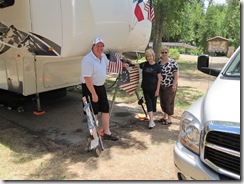 Bubba, LouAnn and Sandy in front of their trailer
We then went out on our own for a little shopping, during which we ate lunch at La Margarita, a fairly good Mexican restaurant, but certainly not up to Texas standards.  I’m not sure why we keep trying Mexican restaurants outside Texas; so far, it hasn’t yielded very good results; I guess it’s because hope springs eternal.  By the way, the worst Mexican restaurant we have ever patronized, and the one by which all other bad Mexican restaurants will be judged, is the one in London, England.  I can’t even remember the name now, as I have attempted to obliterate it from my memory.  Suffice it to say that it truly deserved to be dispatched to the dustbin of history by a talented arsonist.   Sandy enjoyed looking in all the shops in the bustling downtown area, she bought some very handsome earrings in the shape of a Suguaro cactus, which I thought appropriate, given the area in which we are traveling.


Durango is a vibrant, busy town that is very clean and well-policed, appearing to be almost devoid of the kind of blight we saw in Clovis.  I’m not sure how they manage that, given today’s economy, but it reminded me of towns we have seen in Switzerland and Austria that appear to have no citizen underclass.  Amazing.  (Post-publishing note:     We found the, ah, more modest residential area some distance north of the city, in the Hermosa area.)


On tap for the evening’s entertainment was dinner and a show at the Bar D ranch, serving a barbecue dinner to about a thousand folks, who remained for music from a talented quartet singing mostly western songs including, to our delight, the iconic “Tumbling Tumbleweeds,” which I’m sure the group has done every night since 1969 when the place opened.    The dinner was forgettable, but the guys were superb instrumentalists and singers, and we enjoyed the show very much.  We got back to Homer quite late and slept well, enjoying a short rain shower peppering down on the roof. 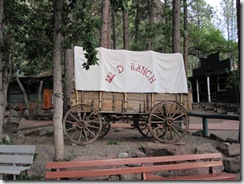 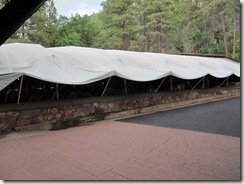 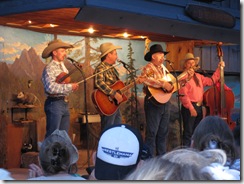 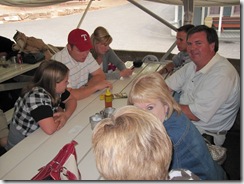 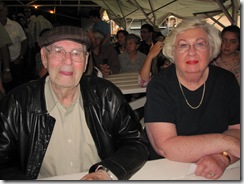 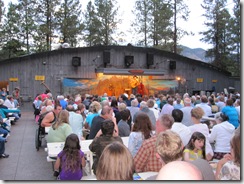 Barry and Algene, Bubba’s mom and dad        Pavilion cover retracted after rain
Posted by Mike Mills at 8:35:00 AM