If you are a railroad buff (or even if you’re not), taking the narrow-gauge rail trip between Durango and Silverton, Colorado is not to be missed.  It is one of the truly iconic train rides in the country, the railroad having been in business since 1882.  The ancient coal-fired steam engines are throwbacks to an era unknown to the last three generations or so of Americans, and the fact that these 1920s relics are still operating reliably is an engineering wonder.  Parts for these locomotives have been nonexistent for decades, so the Durango and Silverton Railroad rebuilds them or manufactures new ones themselves in their state-of-the art shops. 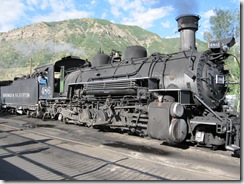 I had ridden the train in my childhood, so my memories of the trip were very hazy.  Sandy had never experienced it at all, so Bubba invited us to meet them in Durango and make the trip with them today.  He made reservations months ago, and if you intend to take this trip, you need to do the same.  Don’t bother to show up on the day of departure and expect to get a seat.


We were to meet at 8:00 a.m., to arrive at the station and get parked in time for the 9:00 a.m. train and, almost as amazing as the locomotives, Bubba and his group were on time!


Sandy had been a little nervous about the trip, as she has some degree of acrophobia and feared the train would be negotiating hairpin curves overlooking deep chasms, a situation that would be very uncomfortable for her.  Unfortunately, I didn’t remember enough about my childhood ride to offer her much assurance that the route wouldn’t be a challenging in this way.  However, as the train made its way up the Animas River valley, it became clear that there would be no hairpin curves overlooking deep canyons, except for a short stretch near Rockwood that was relatively benign but simply too picturesque for her to be apprehensive.


The vast majority of the route followed the Animas River, a gorgeous clear stream cascading over millions of rocks and through calm eddies, as well, making its way south to Durango and beyond.  The water flow is substantial enough to offer a good ride to countless rafters and tubers, and such an adventure seemed really appealing due to the picturesque setting in the cool mountain air. 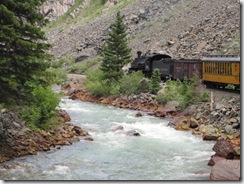 Typical scenery en route to Silverton
The train travels quite slowly, taking three and one-half hours to reach Silverton, a charming old mining town at 9,300 feet elevation, at which point a layover of a couple of hours was provided for lunch and sightseeing before returning to Durango. Main Street in Silverton
A popular option for riders is to omit the return trip in favor of a much faster bus ride.  We chose the bus for the leg back to Durango, and we’re glad we did.  The road trip was through gorgeous mountain scenery, and the driver, who gave an excellent touristy narrative, pointed out that the San Juan Skyway, a part of which is the route between Silverton and Durango, is one of the ten most scenic drives in America.  We would have to agree and vowed to return sometime to make the entire 126-mile trip.


Is this train trip one that I would do again?  Probably not.  Once you get past reliving the rich history of the railroad and the novelty of passenger travel on a steam train, the trip is really little more than spending three and a half hours looking at the Animas River at the bottom of picturesque, but not dissimilar, canyons.  I think one hour would have been enough.


After our return to Durango, we drove about ten miles north to Hermosa and visited Honeyville, a purveyor of honey, jams and jellies and other novelties since 1950.  We got quite a few samples before deciding on six jars of tasty, but rather expensive, honey butter and jellies.


We then came back to town and toured the Durango and Silverton Railroad’s museum (free with your trip ticket), housed in the old roundhouse, still in use by the company to perform maintenance on its rolling stock.  We enjoyed this interesting exhibit and then walked to a nearby Thai restaurant (named the Sizzling Pot, I think) for what turned out to be some really second rate food.  We won’t be going back to this one.


Returning to the RV park, we stopped by Bubba’s trailer and spent a couple of hours sitting outside chatting with the group.  We laughed a lot and finally broke up the merriment as the warmth of the day yielded to the growing coldness of the night mountain air.


It was a good day--a very good day--and tomorrow we will be leaving for Monument Valley.
Posted by Mike Mills at 7:18:00 AM