The drive from Show Low to was tiring, as it was almost all in the mountains.  It was a beautiful drive, but towing a heavy trailer is much more difficult here than, for example, on Interstate highways, where you can just set the cruise control and forget it.  Even with the powerful diesel engine, climbing and descending steep grades is a challenge; the 11,000-pound Homer demands much of the engine and transmission, and careful monitoring is necessary to ensure the engine exhaust and transmission temperatures are not exceeded.  This often requires manual shifting to lower or higher gears, as the transmission is not designed to monitor and control precisely these limitations.  I know that some folks don’t install the extra gauges in their trucks, but according to some experts I trust, drivers ignore these parameters to the peril of their transmission and engine, especially when pulling heavy loads in the mountains.  Some trucks, including Lucille, have warning lights to indicate, for example, excessive transmission temperature.  The problem is, by the time the light illuminates, the damage has likely already been done.  I hate these idiot lights—I suppose because of all my years flying airplanes, where we have gauges for everything imaginable; I am not comfortable not knowing what is going on with the engine and transmission.
By the end of this leg, I was exhausted, so we selected the Silver City RV Park (another imaginative name, isn't it?), and were escorted to a shady pull-through spot by a very officious, if not brusque, older gentleman.  When I pulled out my credit card to pay for the night, he advised me that he didn’t take credit cards, as it wasn’t worth it to him for the $23.00 per night fee.  I thought this was a good enough bargain, and happily handed over the cash without further comment.  I asked him for a nearby restaurant recommendation but, instead of answering, he gave me two brochures on , one of which showed all the restaurants in town.  Perhaps he was a bit grumpy because it was a little past closing time, but I don’t think it would have taken much effort for him to have been ever so slightly friendly. 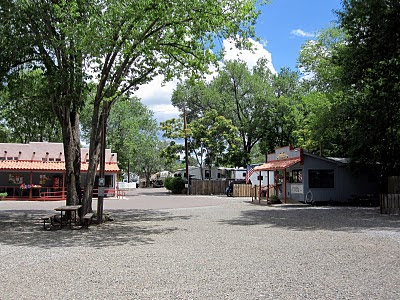 Lots of nice shade in the Silver City RV Park
Since the park manager was of no help in our finding a good restaurant, I went back to Homer and fired up the computer.  A quick check at http://www.yelp.com yielded recommendations for several restaurants in downtown .  We selected Jalisco’s Mexican Restaurant, which was within walking distance of the RV park.
We had a very pleasant walk of some 10 blocks, during which we were able to observe an oddity in the layout of downtown .  When the streets were laid out in 1870, the principal north-south thoroughfare through the business district was named, as you might expect, .  The street one block to the west was named , in honor of the founder of the town.  A couple of decades after the downtown buildings had been erected facing , a flash flood roared through the town and demolished many of these structures.  To prevent a recurrence, the city fathers decided to replace with a canal that would carry the runoff harmlessly beyond the city proper.  This had the effect of rendering the storefronts unusable, as no vehicle or pedestrian traffic was possible.  As a result, , to which the rear store entrances faced, became, in effect, the new , and patrons would simply use the rear doors as the main entrances to the buildings.  Newer buildings were constructed with their fronts facing but, to this day, a number of the older downtown buildings have their more elaborate and unused front entrances facing a dry ditch.  This canal is referred to by the locals, appropriately, as the Big Ditch. 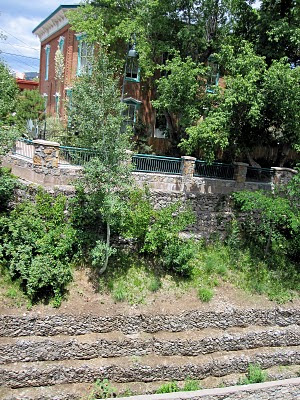 This is one of the old buildings fronting on Main Street, now a ditch. 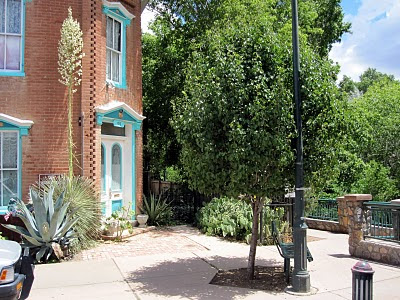 The same building from a different angle; the ditch that was Main Street is just beyond the iron fence. 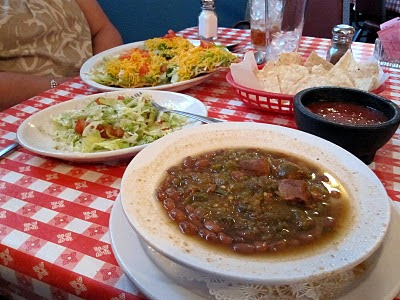 We had a terrific dinner at Jalisco’s.  had combination tostadas and I had green chile stew, made with the famous Hatch chiles—scrumptious!
Afterward, we enjoyed the cool breeze as we walked back to the RV park.  Like and Show Low, the high altitude here makes for mild summers and cool evenings—very pleasant, indeed.
Silver City, so named because of silver deposits discovered in the vicinity, is the home of Western Arizona University, and many of the town’s residents are employed by Phelps Dodge in a nearby copper mine.  The company has given the city notice that the mine will play out within a couple of decades, so the growth prospects of the city seem a bit limited, at least in the short term.
All in all, this was a pleasant and restful stop.  Tomorrow, we’re off again, headed toward .
Posted by Mike Mills at 10:48:00 PM