After leaving Durango and the delightfully cool mornings in the San Juan mountains, it is a relatively short distance westbound on U. S. 160 to a jarringly abrupt change of scenery.  In the short 42 miles to Cortez, Colorado, we were finished with mountains and looking ahead to a foreboding and bleak landscape, almost devoid of vegetation.  We were a little uneasy leaving the security of Cortez, because we weren’t sure we would be seeing civilization again, based on what we were seeing ahead of us.


We decided to eat lunch at Cortez, stopping at a tiny mom-and-pop diner named Popillo’s.  I had a Navajo taco with some extremely tasty green chile sauce on top, and Sandy had a burger and fries.  All of it was cheap and delicious.  We sort of lingered over our meal, probably due to a subconscious uneasiness over what was “out there.”


We finally mustered our courage, and I took special note of the amount of diesel fuel showing on the gauge.  It was nearly full, as I had refueled in Durango, and I had already calculated that I should have plenty of fuel to reach Monument Valley.  Nevertheless, Sandy questioned me several times about the fuel supply, nervous Nellie that she is about such things.  After several reassurances, I finally talked her into giving me the keys.  (Not really.)


Since we were about to enter no-man’s land, we decided we didn’t have enough provisions!  I should modify that to, “we didn’t have enough JUNK FOOD provisions.”  Now bear in mind that Homer’s refrigerator and pantry contained sufficient foodstuffs to take us to Monument Valley even at wagon train speed, but we were very uncomfortably low on carbs!  A stop at a local corner mart solved that problem, as I picked up a collection of favorite “sin” foods and, for Sandy, a glass of iced tea large enough to fill a wading pool.  With this in mind, I felt lucky that Homer’s restroom was following along behind us.


We past by the Four Corners area (where the states of Colorado, Arizona, New Mexico and Utah join at their respective corners), but the actual marker was not accessible due to construction.  This wasn’t particularly bothersome, because we had visited this place before when Mindy was a kid, and we took her photo lying at the four corners marker with her hands and feet all in different states.
After four corners, the landscape became even more barren, with the ribbon that was Highway 160 stretched straight ahead as far as the eye could see.  There was no cell phone signal, of course, and Sandy was getting increasingly fidgety.  She turned toward me, her eyebrows a little higher than usual, and said:


“Do you suppose there are any buzzards out here?”
“Why do you ask?,” I replied.
“I was just wondering how long our carcasses would last for identification purposes.”

Bless her heart; Sandy really hates desolate, isolated spaces, and she is a trooper for enduring all she does to satisfy my wanderlust.


After what seemed like a week in suspended animation, we finally reached Kayenta, Arizona and our turn onto Highway 163 to take us to Monument Valley.  We filled up with fuel, of course, and I thought Sandy would hug the diesel pump at any minute.


After refueling, we set off on the final leg, and it wasn’t long until the unmistakable buttes of Monument Valley appeared before us, instantly recognizable from countless photographs.  This was the fulfillment of a bucket list item for me, and there truly is nothing like “being there.”  The movies and photos just don’t due justice to the grandeur and breathtaking vastness of this area.  Of course, one has to appreciate the clear desert air that allows the impossibly long vistas, resulting in unrealistically long travel times to reach a point that you can clearly see 70 or 80 miles ahead. 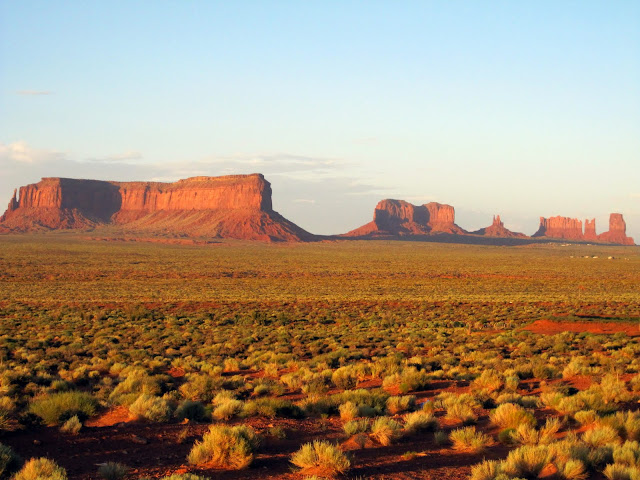 We pulled into Goulding’s campground in late afternoon, with the Mittens (famously named buttes) clearly visible from our spot in the red sandstone hills.  I don’t know how the Gouldings were able to assemble such an enterprise as they have here for tourists, but they are about the only game in town other than the Navajo tribal facility, which isn’t nearly as significant.  If you can think of an enterprise that would be used by tourists, there is a Goulding name on it:  Goulding’s Lodge, Goulding’s Restaurant, Goulding’s Campground, Goulding’s Tours, Goulding’s Grocery Store, Goulding’s Car Wash, even Goulding’s Airport.  This family simply has a gold mine here.


The famous formations around here are what’s left of vertical sandstone rock areas that have eroded more slowly than the softer sandstone shale areas around them.  This erosion has been taking place over tens of millions of years, and one day, they will finally be gone.  (Don’t worry, Bubba, it won’t be on our lifetime.)  These formations are said to constitute the most photographed landscape in the world. 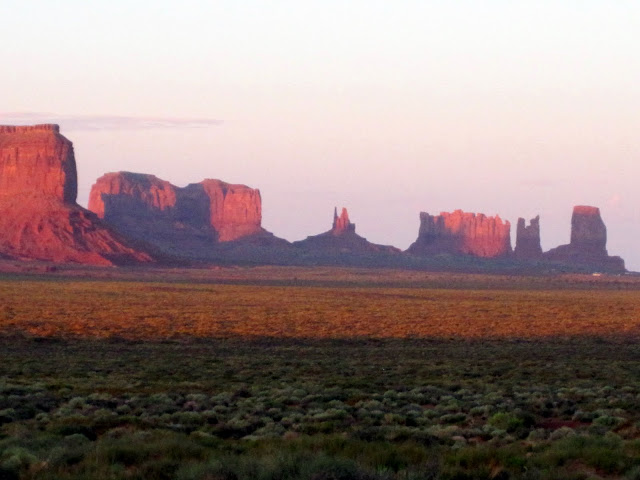 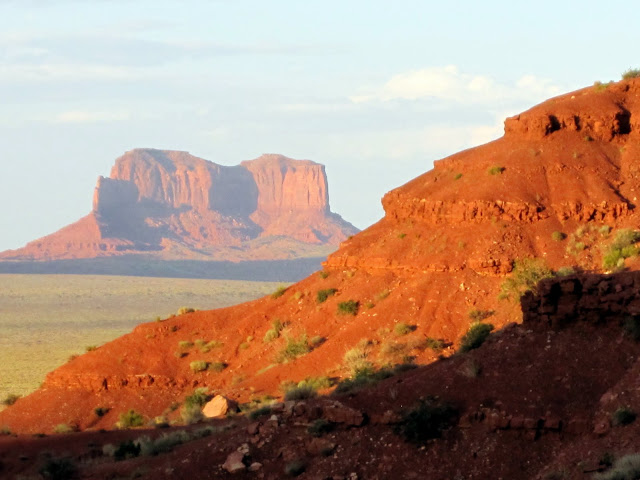 Of all the photos I took, the two above are my personal favorites.

We had a nice steak dinner in Goulding’s Restaurant overlooking the valley, and afterward, a nice Fourth of July fireworks show. 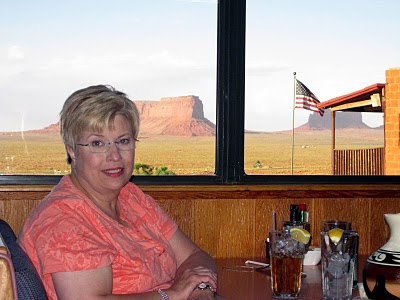 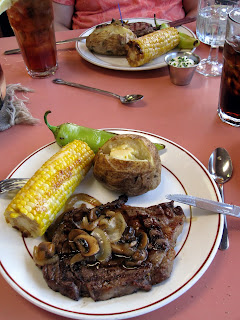 Only foodies take photos of their meals. (This was quite good, and we don't apologize for being foodies.) 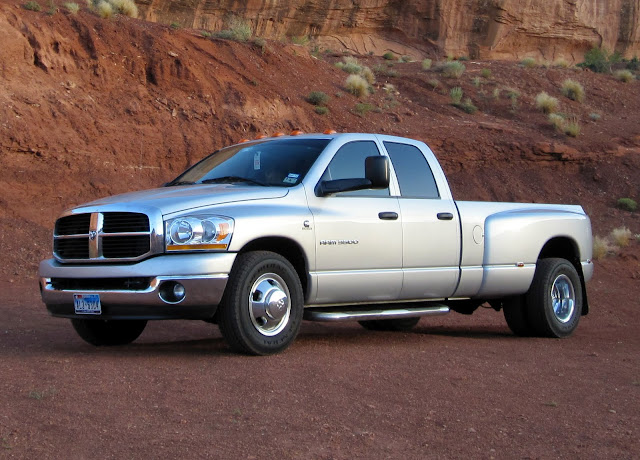 Lucille just had to get into the act.  She's pretty fetching, don't you think? 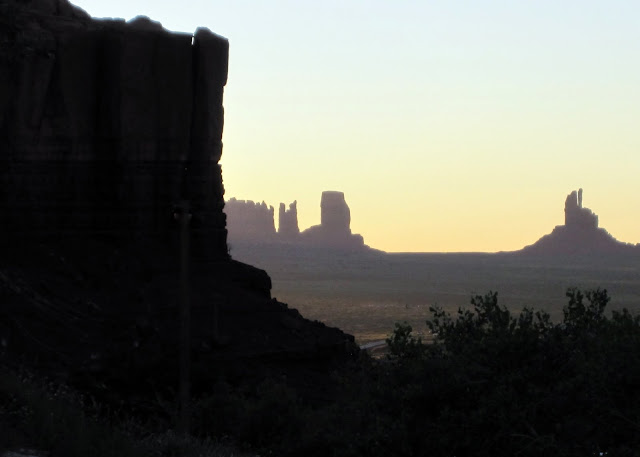 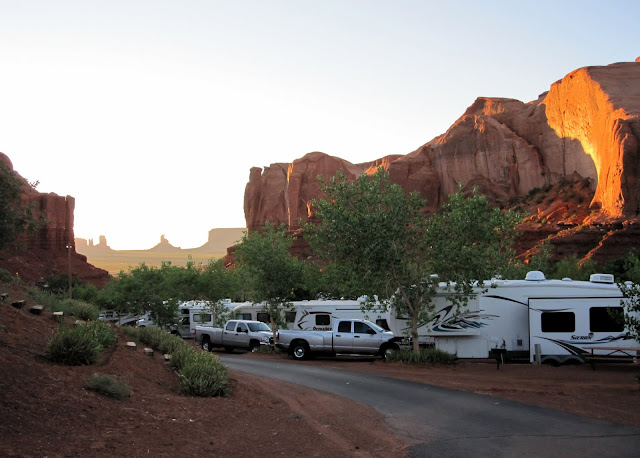 
I can’t help remembering the countless photos and movies I’ve seen with this area as the backdrop, and it’s hard to believe it’s taken me so long to see it for myself.  I am truly humbled with gratitude that God gave me life, eyesight and a perfect companion with whom I can behold what must be some of His best handiwork.
Posted by Mike Mills at 11:23:00 AM