Yes, We Eat Out a Lot

I suppose it's time to catch up on restaurant reviews. Yes, I do a lot of these in this blog, and there have been a number of commenters who wonder if all we do is eat out. Well, while we do other things, we also tend to eat regularly and, admittedly, most often at restaurants. We usually eat a light breakfast in Phannie, but at lunchtime and dinnertime, we are often sightseeing or otherwise roaming around, so we usually grab something to eat at a restaurant that has been recommended by others or that has good reviews on Yelp, Urbanspoon, Local Eats, Trip Advisor or TV Food Maps. Sometimes we just stop somewhere and take our chances. We tend to avoid expensive venues and chain restaurants in favor of places where the locals go for a good meal. Ferreting those out is sometimes an adventure in itself, because it may take us off the beaten path to a discovery that would be missed by the tourists. Another benefit is that we have a permanent record of the places we like (and don't like) in case we find ourselves in the area again.

We really see no need to apologize for this, as cooking meals for just the two of us is time consuming and messy. We try to mitigate some of the expense of eating out by choosing more modest restaurants, sharing an entrée, skipping adult beverages and, of course, taking advantage of senior discounts. By doing this, we don't think it's too much more expensive. Did I mention there is nothing to clean up?

There's also the potential for people watching. Many of my inspirations for posts come from observations of restaurant patrons or workers. It's a slice of life that shouldn't be ignored, and I exploit it when I can. There's also the matter of my bum foot; I am somewhat circumscribed in my activities at the moment, so going out to eat is a welcome diversion from the confines of Phannie. Fortunately, we have previously toured most of the tourist attractions in this area and posted about them on the blog, so my temporary lack of mobility is not causing us to miss any sightseeing.

Following are comments about some more of the restaurants we've sampled here in Rockport. You will notice that most are seafood restaurants, of which there are many in this area. We are very fond of fresh seafood and, since it doesn't get much fresher than that which comes in on the boats each day, we indulge ourselves.

The Bleu Crab Cafe. A new restaurant that is trying too hard to be something it isn't. It has a promising chef who is--I never thought I would say this--too heavy handed in using butter. (Yes, Paula Deen, there is such a thing as too much butter.) Its offerings are too expensive and esoteric for an inelegant café in a strip shopping center. They'll need a lot of luck, I'm afraid.  Three and a half stars for food, but two and a half overall because of the identity crisis.

Jalisco's. A somewhat tired but inexplicably popular Mexican restaurant where the food is just serviceable at best. The enchilada sauce is likely out of a can. Although there were few patrons in the restaurant when we visited, there was no place to sit, as every empty table needed bussing. Only 2 stars for this one; don't bother.

The Shack Smokehouse. A typical BBQ joint that is definitely a hangout for the locals. The service is good, and the staff is friendly. We liked the barbeque, but while the ribs had a good smoky flavor, they were way overcooked. The meat on a perfectly cooked rib should adhere to the bone just slightly as you take a bite. These ribs fell apart when I lifted them from the plate. Sandy tried a hamburger, which was quite good. The meat patty was hand formed and generous, the bun was toasted and, thankfully, the burger was served fully assembled. (If there is a pet peeve of mine, it is a hamburger that is served dismantled. This irks me because the purpose of coming to a restaurant is to have a meal prepared for me. If they leave some of the job for me to do, I may as well have stayed home. Such an error would be fatal in my book, and I would not darken their door again.) Three and a half stars, though, for the Shack; it's worth a visit.

Charlotte Plummer's. This well-known restaurant overlooking the Fulton waterfront is one that can be counted on for good food and good value. We ate here three times on this trip and had seafood each time. We found it to be fresh and tasty with good service provided. We also liked the salad bar. Four stars for this one. You can get a good meal here with a good view of the bay, and it won't cost an arm and a leg. (Perhaps just an arm.) 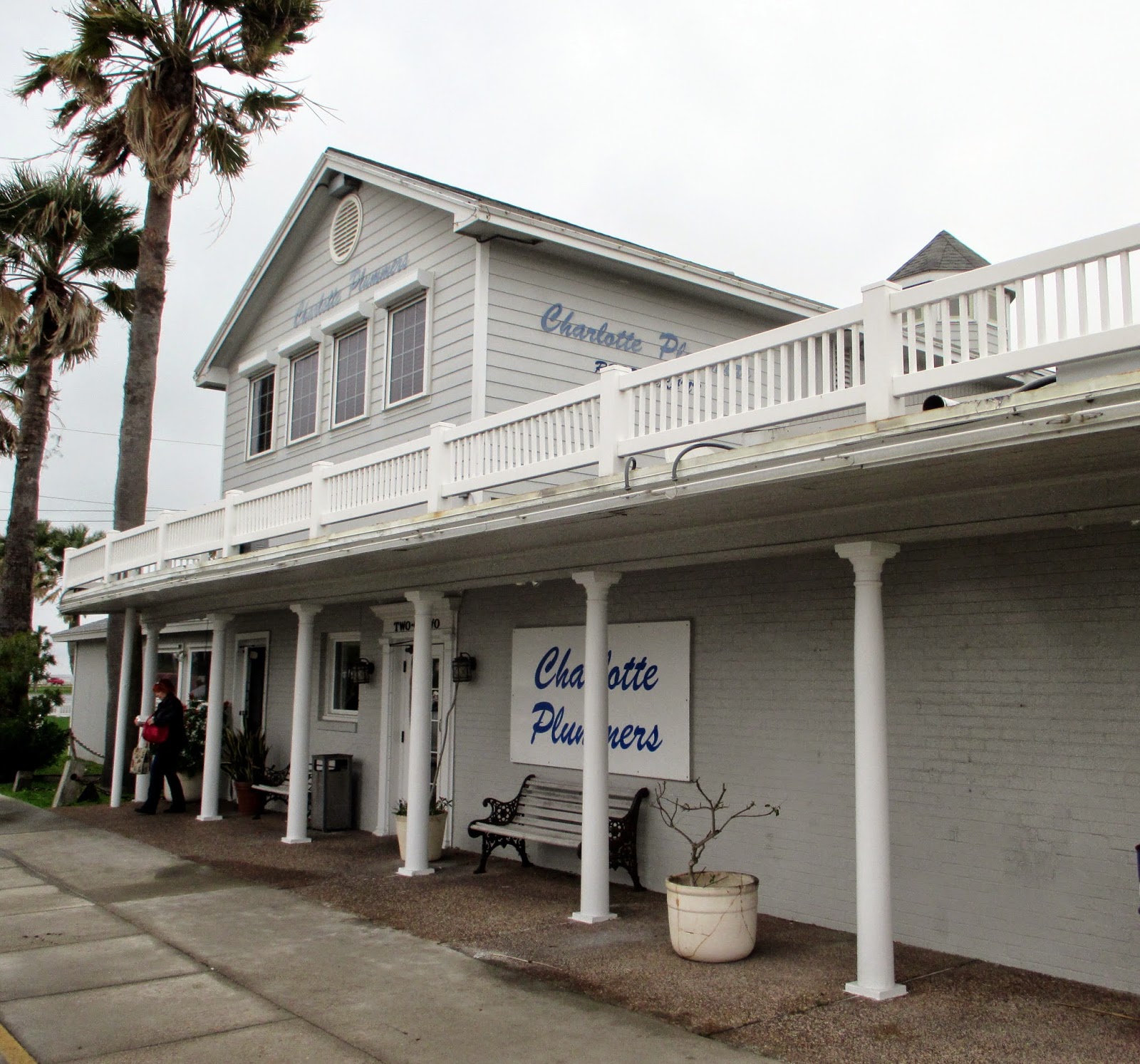 One thing you really shouldn't miss at Charlotte Plummer's is the bread pudding. It has a wonderfully rich bourbon sauce and is probably too sinful to be eaten on Sunday. But we did; we'll repent later.


JD's Seafood and Burgers. We had a fried seafood combo of fish and shrimp which was pretty good. It was on a lunch special for $13.95, which we thought was a good deal. The regular price of $19.95 would have been a bit much unless the portions were larger. The staff was friendly enough, but our server was distracted. On the day we stopped, they could accept only cash, claiming their credit card machine was on the fritz. The décor was sparse and uninspired, and we got a feeling that all may not be well from a business standpoint. Two stars for this one; we don't think we would go back.

Captain Benny's Seafood. If there were ever a hangout for locals, this is it. We were greeted by Captain Benny himself, a wiry old gentleman who constantly mumbled to himself and assiduously guarded the cash register. Everyone seemed to know him except us. The patrons also seemed to know each other, and several groups sat at large mismatched tables in the ramshackle place. They were surrounded by many beer and wine bottles they had carried in themselves, as the restaurant is BYOB. Most of the bottles in view were empty or nearly so, and the noise levels at the tables seemed to increase proportionately with the consumption of booze, which is, of course, not exactly a new phenomenon. The service was incredibly slow--it took about an hour to get our meal--but it was no faster for the regular patrons either, who were really too sloshed to care.

One woman feeling no pain at a nearby table took the opportunity, in an increasingly loud voice, to describe in excruciating detail the labor and delivery of her two children. Very little was left to the imagination, including a description of how the doctor "cleaned her out" once the baby had arrived. Fortunately, our meal had not yet been served, so we had a little time to recover after she had finished the grisly story.

The food? Quite good, actually. The shrimp and fish were very fresh and tasty, and the price was fairly reasonable. Three and a half stars; we would go again, even though the service was slow. It's sort of like driving up on a traffic accident; you know it's not going to be pretty, but you can't keep from looking.


Thank you, Lord, for the wonderful life You've given me. Please forgive me if I do not appreciate it enough each day.