Approaching One Year of Fulltiming: Still Getting Rid of Stuff

As we approach the end of our first year of fulltiming, we find ourselves still in a paring down mode. Getting rid of possessions accumulated over 40 years has not been easy. The reason, I suppose, is that we spent most of that time acquiring the stuff and only a small fraction of that time getting rid of it. Oh, if only we had had the wisdom of old age when we were young!

I'm not sure why we thought it necessary to buy or build huge houses, since there were only the three of us. The obvious and uncomfortable answer was that it was an ego thing, I guess. Over time, we began to realize that acquiring things wasn't ultimately satisfying and that big houses require big attention and big expense to keep up, inside and out.

We eventually built a relatively modest RV port home, an experience well documented earlier in this blog, that was to be our retirement home base while we wandered the country, and that's what it became. However, we found ourselves enjoying RV travel and living so much that we began to resent having to return home and take care of the required upkeep on the house before being able to leave again. We were also in a state of constant apprehension, worrying over the security of the place after a burglary that resulted in a painful emotional and financial loss for us. The security alarm that was installed was obviously no deterrent, so our much desired freedom to travel was not really free, clouded with worry and resentment as it was for us.

We eventually decided that the only way to be truly free was to get rid of the things that were enslaving us; that meant the house and the stuff inside it had to go. Once we made the decision, things happened quickly, and the jettisoning of the rest of our stuff became brutal. That experience was also fully described about a year ago in this blog and yes, it was so worth the effort.

My point in including this brief version of our downsizing for fulltiming is to provide evidence of how very far we've come in terms of getting rid of our bondage. And yes, I'm using the term bondage on purpose, because that's what the tentacles of our materialism felt like when we were desperately struggling to be free. To that end, take a look at what is left after our efforts over the past years--from 3,500 square feet a decade ago to this: 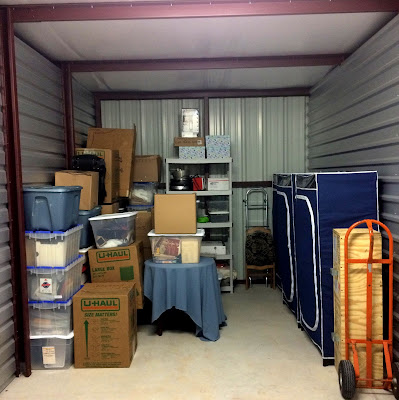 This storage unit area occupies about 120 square feet and, as you can see, there is room to spare. Most of what is left is memorabilia and photos that we are slowly going through toward a goal of digitizing things to the extent possible. There are also a few clothes left after having donated hundreds of garments to charity, and we're still working on these.  These things will continue to dwindle as we go forward, for we experience a greater sense of freedom with everything we discard. And you know what? We've missed none of it! Besides our huge increase in freedom--and did I mention spendable income?--not missing our "stuff" is perhaps the most remarkable thing about this experience.

Now, is this draconian offloading experience for everyone? Of course not. Most younger families need the stability that a house brings in a permanent location. Some empty nester couples would perhaps not fare so well with so much togetherness. Some would prefer the stability of their community and relationships, and some just need more room, period. And that's all fine; if a lot more folks got into fulltiming, we would probably have an RV parking crisis out here. For those who might be contemplating such a move, however, this is just something for your consideration. For us, it is nirvana. If only we could have done it sooner!