A Layover in Elkhart; We Arrive in White Pigeon

After a fairly tiring 435-mile trek from Hannibal, we settled in at Elkhart Campground for a day of rest before taking Phannie in for her annual service at Indiana Diesel in Elkhart. This was our first time to use Indiana Diesel, and we have mixed feelings about the experience. We sort of got off on the wrong foot because they weren't able to begin work on Phannie for more than an hour past our appointment time of 0930. Secondly, they didn't have on hand all the filters they needed, even though I had specified the engine and transmission types when I made the appointment. Thirdly, they didn't have a lift, so the mechanics had to slide around underneath the bus in very limited space, so I know that doesn't make for the best working conditions and requires a longer time for maneuvering. However, I kept an eye on the process, and they finally finished after taking almost the entire day--stopping from time to time to await parts deliveries and taking breaks.  Here is Phannie, apparently during one of those breaks: 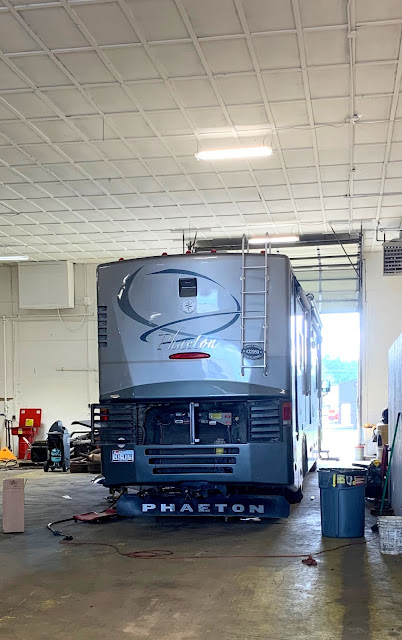 We admit to being a bit spoiled by Bay Diesel in Red Bay, Alabama, a no-nonsense shop with motorhome experts where Phannie gets most of her service done. In my book, they are the standard by which all others are judged, and most of the others fall short in one way or another. I admit to being a bit obsessive-compulsive when it comes to getting Phannie serviced on schedule and with the best shops. But perhaps that is why the drive train has served us so well--90,000 miles now without a hiccup.

Indiana Diesel was not without a couple of bright spots, however. The techs appear to be experienced and sufficiently skilled in their work, and the owner is very personable and laid back--but maybe a little too laid back, judging by the snail-like pace of the work. The best part, however, was their pricing, which was quite a bit lower than I was accustomed to paying for an annual service that included transmission service. That helped make the all-day event a little easier to endure. Would I use them again? Maybe, if we were in the same situation where the service became due at the same time we were in the area. That's not very likely, however.

One of the nice things about traveling through the upper Midwest is the occasional finds of roadside vegetable stands. We passed an uncountable number of corn fields and truck farms during our trek through Missouri and Indiana, so we are taking full advantage of the bounty of sweet corn, tomatoes, cucumbers and the like of freshly-picked vegetables. We will miss these, for sure, once the season is over. 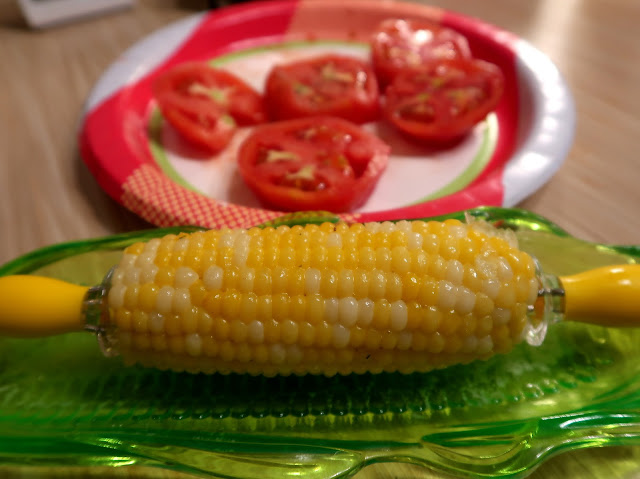 We couldn't help but make our way to Shipshewana while in the area, where we picked up some goodies from Yoder's Meat and Cheese shop, a favorite stop right there on the main drag: 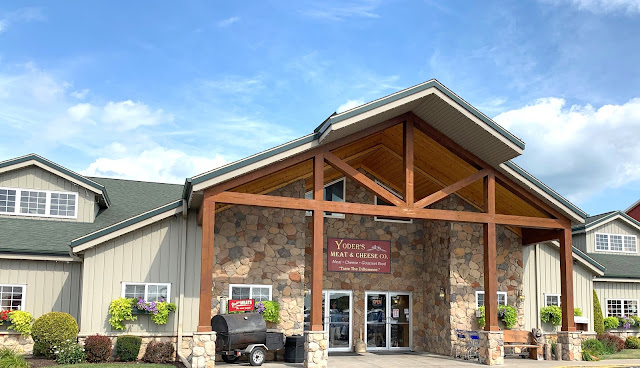 Inside, I scored some jalapeno summer sausage and a big block of jalapeno and bacon muenster cheese that is, well, to die for. Outside was a fried pie truck that I was unable to pass up. We bought four cherry pies (they had sold out of everything else), and once we tried them, wished we had gotten a dozen. It was every bit as good as it looks: 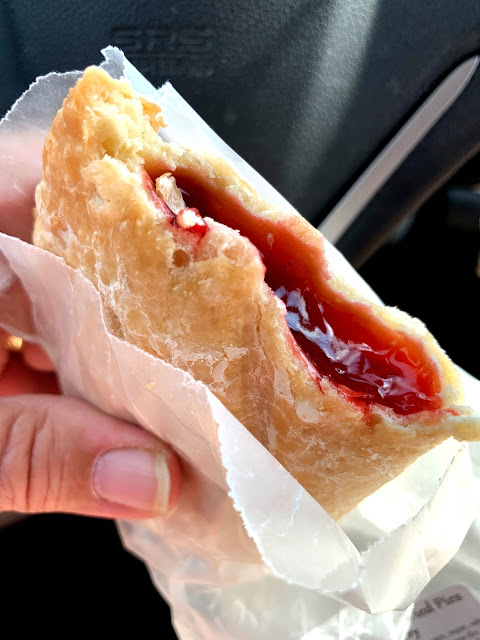 We left Elkhart on the first rainy day since our arrival. The purpose was to be on time for our appointment in the tiny town of White Pigeon, Michigan to have our old Atwood jacks replaced with Bigfoot levelers. We were trying not to be smug with our Texas friends about the very pleasant temperatures in the high seventies here during the day and the low sixties at night. We even had to run the heater on one of the cooler mornings!  It'll get even cooler, of course, as we head north. It was a very short drive from Elkhart, as the Bigfoot complex is only three miles north of the Indiana/Michigan border. We were a little surprised at how small the facility is, and we went inside the sparse office and met several of the executives and employees, all of whom were dressed very casually in jeans and sport shirts. It is definitely a casual and friendly family-run business, and they clearly don't believe in spending lavishly on overhead like fancy buildings. Here is a photo of the main office:

We were directed to pull Phannie around to the back of an adjacent building where there were electrical hookups provided for three RVs. We were the only ones there, so we parked and prepared for a restful evening: 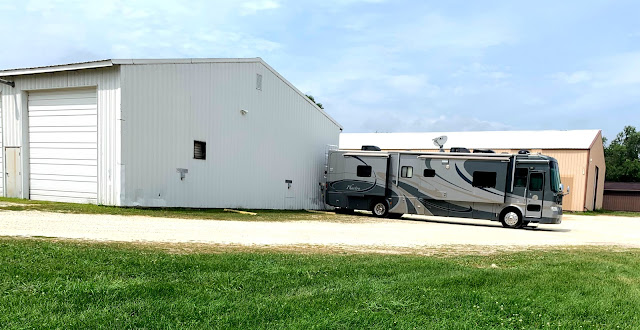 The installation will be done in the tan-colored building beyond Phannie in the photo, and our appointment is for 0800. This means we will have to actually set an alarm and get up at an hour we are rarely awake to see. I'm not sure how this is going to work out with such sleep deprivation. We'll have a complete report in the next post--whenever I can get rested up enough from lack of sleep to write it.